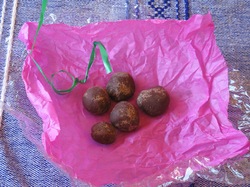 Surprisingly, according to some chocolate mavens, it may have been Jews in southwest France in the 17th century, known as expert chocolate makers in Bayonne, who first developed chocolate Easter eggs. These, they say, were passed around during Mass to provide morsels of sustenance.

Eggs at Easter recall the resurrection of Jesus. Since eggs were not eaten during the Lent period preceding Easter, the stored-up eggs were especially enjoyed on Easter. Fortunately, egg shaped chocolates ensued.

Later, Quaker owned English chocolate companies such as Cadbury and Fry's vied for the distinction of making the first Easter egg in the United Kingdom. Though Quakers generally do not observe Easter, Fry's saw a business opportunity in producing the first chocolate Easter egg there in 1873. Cadbury's website states that it brought out its first chocolate Easter egg in 1875. Today their Cadbury Creme Eggs burst into popularity though a very recent recipe change diminished sales. 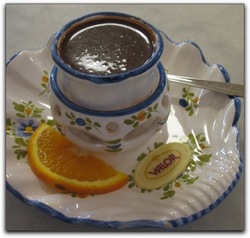 Disputations abounded over drinking of the chocolate beveragee during Lent. Arguments in favor of the permissibility of chocolate notes that it was to alleviate thirst. Furthermore, since Christians drank wine during fasts, so chocolate drinking should be permitted. To be clear, if the chocolate was intended as nutriment, as when mixed with milk or bread which was not unusual, it should not be permitted. Finally, in 1666, the Holy Office of the Pope ended the long debate, determining that chocolate drinking during Lent was to be strictly limited to that made only with water and without sugar or milk.

Today's Guatemalan Lenten customs also connect to chocolate. During the days leading up to Easter week, drinking chocolate is preferred to coffee. On the Wednesday of Holy Week known as Semana Santa, young men customarily pilgrimage from Santiago to the coast's ancient cacao groves to gather cocoa pods and cocoa branches to decorate the town. 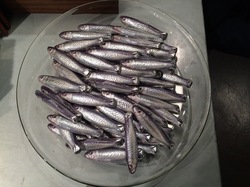 In contemporary France prior to Easter, fish-shaped chocolates, poisson d'Avril, are abundantly available. While no one could explain this to us, I figure that Jesus and fish were associated through the miracles of the fish. Also, the Greek letters for the word for "fish" relate to an acrostic referring to Jesus as messiah. Fish come to symbolize Jesus. Or perhaps these chocolates represents the fish eaten instead of meat during Lent. The chocolate shops are teeming with them. 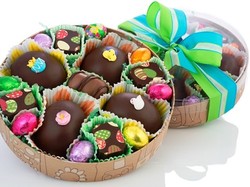 To round out the story of chocolate and Easter, the 20th century Orthodox Jewish owned chocolate company, Barton's, produced Easter eggs. They were made according to Jewish food laws and certified kosher. The same is still true for the Easter products produced by The Madelaine Chocolate Company, a family owned firm related to the Klein family of Barton's, now located in Rockaway Beach, New York.

Believe it or not, when you eat a chocolate egg this week, you will be connecting your palate to surprising religious history.

Other exciting Easter chocolate offerings may be found at:

Rabbi Deborah R. Prinz lectures about chocolate and Jews around the world. Her book, On the Chocolate Trail: A Delicious Adventure Connecting Jews, Religions, History, Travel, Rituals and Recipes to the Magic of Cacao is in its third printing. The book is used in adult study, classroom settings, book clubs and chocolate tastings. Prinz blogs at On the Chocolate Trail and elsewhere.