Brightly decorated eggs, egg rolling and egg hunts have become integral to the celebration of Easter.

However, the tradition of painting hard-boiled eggs during springtime predates Christianity. In many cultures around the world, the egg is a symbol of new life, fertility and rebirth. For thousands of years, Iranians and others have decorated eggs on Nowruz, the Iranian New Year that falls on the spring equinox.

Some claim that the Easter egg has pagan roots. Before Christians celebrated the resurrection of Jesus, some argue ancient pagans in Europe observed the Spring Equinox as the return of the sun God ― a rebirth of light and an emergence from the lean winter. Some also point to the Venerable Bede, an English monk who wrote the first history of Christianity in England, for evidence of this connection. Bede argued that even the word Easter derived from a pagan fertility goddess named “Eostre” in English and Germanic cultures. Scholars have since noted that there is little to no evidence of such a goddess outside of Bede’s writings. Also, in most other languages the word for Easter ― Pascua in Spanish and Pasques in French, for instance ― derives from the Greek and Latin Pascha or Pasch, for Passover.

For Christians, the Easter egg is symbolic of the resurrection of Jesus Christ. Painting Easter eggs is an especially beloved tradition in the Orthodox and Eastern Catholic churches where the eggs are dyed red to represent the blood of Jesus Christ that was shed on the cross. Easter eggs are blessed by the priest at the end of the Paschal vigil and distributed to the congregants. The hard shell of the egg represents the sealed Tomb of Christ, and cracking the shell represents Jesus’ resurrection from the dead. Moreover, historically Christians would abstain from eating eggs and meat during Lent, and Easter was the first chance to eat eggs after a long period of abstinence. (Orthodox Christians continue to abstain from eggs during Lent.)

Easter egg hunts and egg rolling are two popular egg-related traditions. An egg hunt involves hiding eggs outside for children to run around and find on Easter morning. Eggs are rolled as a symbolic reenactment of the rolling away of the stone from Christ’s tomb. In the United States, the Easter Egg Roll is an annual event that is held on the White House lawn each Monday after Easter. (Due to COVID-19 concerns, the 2020 White House Easter Egg Roll has been canceled.) 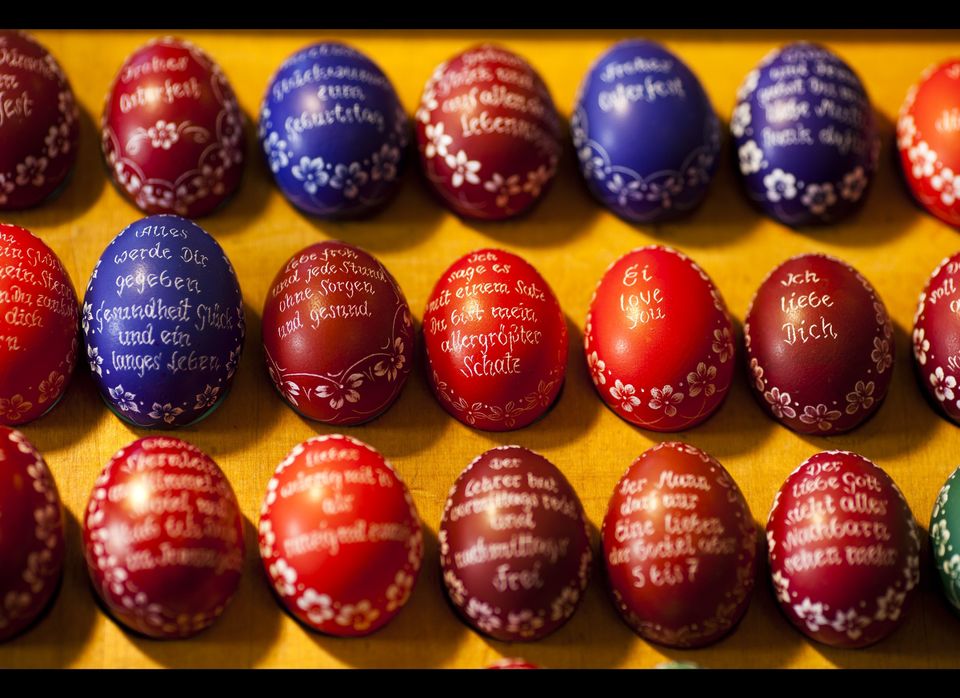 1 / 25
Easter Eggs
HOYERSWERDA, GERMANY - MARCH 24: Painted an Easter egg in traditional Sorbian motives at the annual Easter egg market on March 24, 2012 in Schleife, near Hoyerswerda, Germany. Easter egg painting is a strong part of Sorbian tradition and visual elements within the painting are meant to ward off evil. Sorbians are a Slavic minority in eastern Germany and many still speak Sorbian, a language closely related to Polish and Czech. (Photo by Carsten Koall/Getty Images)
Getty