Mulrooney, assistant anthropologist at the Bishop Museum in Honolulu, spent six years collecting and analyzing radiocarbon dates from around the island in an effort to ascertain how the people of Rapa Nui sustained themselves before and after the time of the first European discovery in 1722.

Mulrooney claims that the data paints a picture not of resource decimation but rather of “sustainability and continuity.” Mulrooney goes so far as to say that “perhaps Rapa Nui should be the poster-child of how human ingenuity can result in success, rather than failure."

She does not dispute that the Easter Island inhabitants, known as the Rapanui, destroyed the island’s abundant forests. But Mulrooney argues that deforestation was conducted in order to create agricultural fields and plant much more useful crops, like sweet potato and taro.

This is not the first challenge to the Diamond school of thought. Archaeologist Terry Hunt and anthropologist Carl P. Lipo argued in their 2012 book The Statues That Walked that the Rapanui were sustainable farming innovators. Mulrooney’s use of radiocarbon dating proves that innovative agriculture was taking place on the interior of the island well after European arrival. Which means lack of food and the anarchy it could have caused were not the reasons the society collapsed. “It wasn’t until well after European contact that we have real evidence of depopulation and major changes on the island,” Mulrooney says.

Easter Island is only 63 square miles in area and sits over 2,000 miles from the nearest country of Chile. Polynesian settlers reached Easter Island roughly 1,000 years ago (give or take 500 years, depending on whose theory you believe) via canoe. 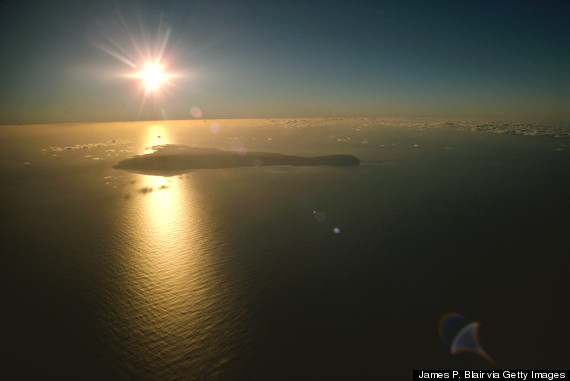 Rapa Nui is famous for the mysterious giant statues -- called moai-- erected on the island long ago, reaching heights above 30 feet and weighing as much as 270 tons. With nothing more than crude tools, Rapanui people erected the statues, moved them around the island, and eventually toppled them all. 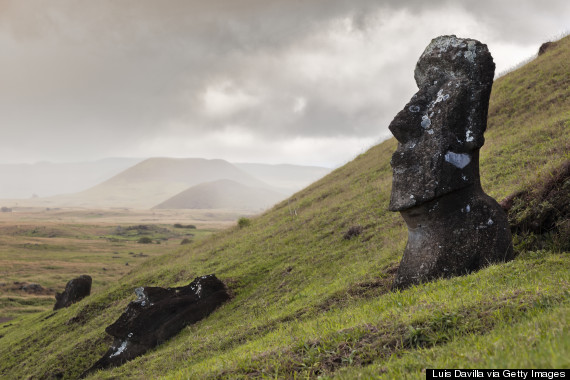 In his bestselling book Collapse: How Societies Choose to Fail or Succeed, Jared Diamond argues that the people of Easter Island are a perfect example of a society whose lack of forethought and resource-greed led to its demise.

“The first Polynesian colonists found themselves on an island with fertile soil, abundant food, bountiful building materials, ample lebensraum, and all the prerequisites for comfortable living,” Diamond wrote in a 1995 article for Discover magazine.

But Diamond says the Polynesian society’s “doom had been approaching as people cleared land to plant gardens; as they felled trees to build canoes, to transport and erect statues, and to burn ... The overall picture is among the most extreme examples of forest destruction anywhere in the world."

Diamond wrote that the erection of the moai, and their increasing size over time, is indicative of a “spiral of one-upmanship,” and likens the practice to Hollywood moguls exhibiting their wealth and power by building bigger and bigger estates. He says Rapanui cannibalism and the practice of living in caves for protection indicates chaos due to resource depletion.

Diamond sees Easter Island as a microcosmic example of the Earth’s future if devastating resource depletion continues. Mulrooney sees it as an example of human ingenuity in the face of extreme isolation. The answer may be that Easter Island is both, and the takeaway is up to us.