NewsU.S. NewsWorld NewsBusinessEnvironmentHealthCoronavirusSocial Justice
PoliticsJoe BidenCongressExtremism
EntertainmentCulture & ArtsMediaCelebrityTV & Film
LifeStyle & BeautyFood & DrinkParentingTravelWellnessRelationshipsMoneyHome & LivingWork/LifeShopping
CommunitiesQueer VoicesWomenBlack VoicesLatino VoicesAsian Voices
Special ProjectsHighline
HuffPost PersonalVideoHoroscopes
From Our PartnersBack In The DayWork ItDon't Sweat ItRoom for Everyone
Newsletters
InternationalAustraliaBrazilCanadaEspañaFranceΕλλάδα (Greece)IndiaItalia日本 (Japan)한국 (Korea)QuébecU.K.U.S.
Follow Us
Terms | Privacy Policy
Part of HuffPost Travel. ©2021 BuzzFeed, Inc. All rights reserved.
Over two thousand miles both west of Chile's mainland and east of Tahiti sits one of the most
remote
Advertisement
inhabited islands in the world. The water is so clear that when swimming, I can see the chips in my toenail polish. The horses run so wild that there are warning signs posted. And the stone statues are so grand that upon first sight, all I can utter is "Holy sh*t." 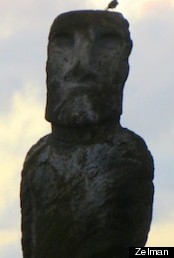 This, is Easter Island -- "Isla de Pascua" in Spanish and by indigenous title, "Rapa Nui." But to me, it will always be the "Holy Sh*t Island."

I was rendered incapable of complex thoughts by the island's sites, forced to fall back on my 16-year-old vernacular and simply exclaim profanities.

I first named this island after two hours of biking over pot-holed dirt roads and a 15 minute stand-off with a gang of cows.

At long last, my friend and I reached a blank sign.

We stared at this blank sign, scouring the deserted landscape for what our map indicated were caves. Two men pulled up and began unloading their car with fishing gear.

"Perdón?" I approached and asked, "Dónde está the cave?" (Note: My Spanish should not be seen as a translation guide, but rather as a lesson on what happens when you stop studying a language after high school.)

One of the fishermen led us to a pile of rocks surrounding a dark hole in the ground.

I had five maps, four Nescafe coffee sticks and no flashlight. 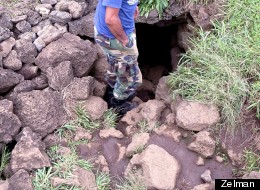 Buried in my backpack's side pocket though was my iPhone. My mom had insisted months ago that I download a flashlight app, cautioning, "You just never know when you might need it for safety."

Now, thanks to my mother, I handed my iPhone over to the stranger and he led us into the dark abyss.

My toes wiggled as I slid down through the hole, unsure of when they'd land.

Once inside the cave, the fisherman held the iPhone light with one hand, extending his other to help us navigate between pools of water and duck under craggy rocks. When the light was elsewhere, I felt exposed to the uncharted darkness -- I was utterly reliant on a fisherman and an iPhone app.

What the hell was I thinking?

I scampered ahead, pawing through the darkness, using the occasional flicker of light to indicate the next rock to grip. And then, a thin sliver of light.

I clomped into a puddle and rounded another corner.

Two streams of white light poured through the cave.

Twin holes overlooked the vast, blue sea. The water was so striking it seemed Mother Nature had a little too much fun with the blue food dye.

We rested on the edge, peering through an opening, in the middle of a cliff over the ocean. 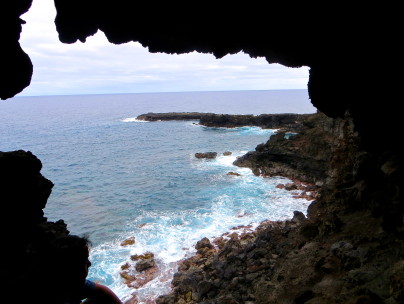 I followed the fisherman's pointing finger down, and deep in the clear water, there swam a bright yellow fish.

I turned and asked him to tell me his favorite part of the island.

He laughed, and offered the same response I had heard twice before: "Toda la isla es mi favorito!"

The beloved island bewilders anthropologists; theories abound surrounding the first inhabitants, construction of the moai (ancestral tribute statues towering up to 33 feet tall, weighing up to 82 tons), and a civilization's demise.

One theory, explained by Pulitzer Prize winner Jared Diamond, suggests that a lush forest once covered the island, and while islanders depended on the trees for sustenance, they also used these trees to transport statues. Competitiveness grew as clans created bigger and bigger statues, demanding more and more resources, right up until the very last tree of its kind on the island was chopped down, chaos erupted and the population plummeted.

Thousands of miles away, as houses grow into McMansions, cars balloon into SUVs, and our consumerist culture demands goods quicker, bigger and more powerful, we turn a blind eye to the resources that fall victim to our fast, fat, American dream.

Although other theories dispute connecting deforestation and the moai with the civilization's decline, there is a shared concern for Easter Island's future. Faced with a growing population, National Geographic's Hannah Bloch suggests the islanders must balance "exploiting their cultural legacy without wrecking it."

After a pre-dawn hour drive in pitch blackness -- save for patches of foreign stars -- with windows rolled down listening for waves to ensure we were heading in the right direction, we pulled into a field. As the stars melted away and the first rays of sun bounced off the clouds, there stood 15 moai towering above us so majestically that although tourists swarmed, we were all humbled into silence.

Two sweaty hours into a "bike ride" up Rano Kau volcano with a stray dog leading the way, we rounded a corner and there sat a crater lake, with part of the wall crumbling into the sea. (Note: "Bike ride" is in quotes because after four minutes pedaling uphill, we walked the rest.) 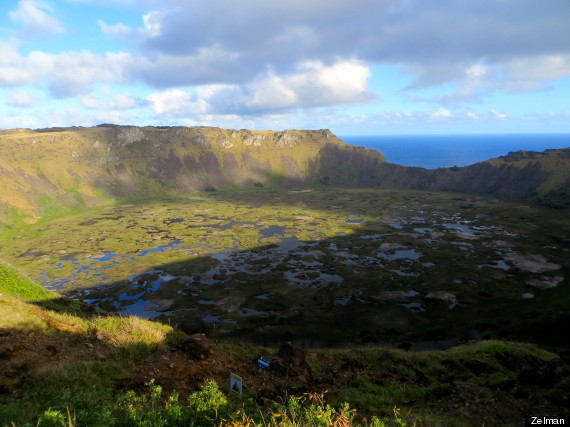 Rano Raraku is the quarry where statues were carved. Unfinished faces and bellies protrude from the mountain, some abandoned facial features so massive, one can't help but reflect on all the world's dreamers' failed ambitions. 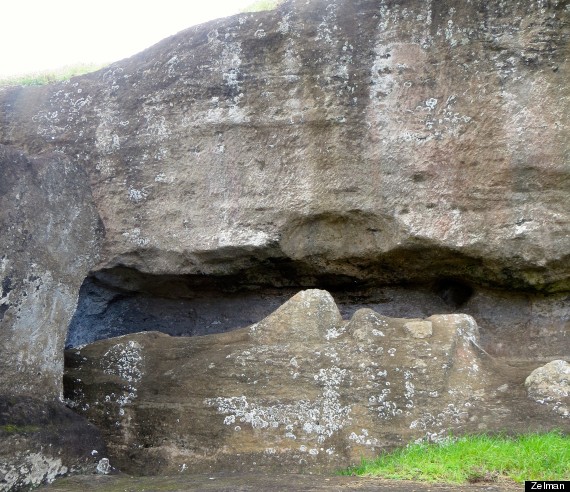 MUST-SEE LIST:
Hike or rent a bicycle to really soak the island in. Outside the main village of Hanga Roa, there are few sites with water or bathrooms. The paths are bumpy, so after biking you won't be able to sit for a few days. Totally worth it.

Ana Kakenga (Cueva de las Dos Ventanas): Climb into this dark hole with a flashlight. It may feel long, but it's a short walk through the cave to the ocean.
Ahu Tongariki: Although best at sunrise, this row of moai are stunning any time of day.
Rano Kau: A real "Holy sh*t" moment to see this crater and hole revealing the sea.
Orongo: The village where the annual birdman competition was held to establish power.
Rano Raraku: This quarry reveals how the moai were created. Visit the crater here as well.
Ahu Tahai: Join the flock of tourists to watch the sunset behind moai here.
Anakena: A beach with crystal clear water.
La Kaleta: This restaurant offers a real meal by the sea with its patio over the surf.
Terevaka: Trek the island's highest point to view the ocean surrounding you from all sides.

PAST TRAVELS:
Dear New York, We Need To Take A Break

Life Is What Happens When You're Killing Time...Even With A Dead Camera, 120 Yen And A Lot Of Sleet

When My Mother Heard I Was Traveling Along To India...