All summer long, there's a certain part of Maryland that gets everyone's attention. And there's plenty to love about Ocean City and the Assateague Island National Seashore.

But as summer turns to fall -- and weekend warriors try to squeeze in just a few more last-chance trips -- smart travelers should look toward Chespeake Bay and Maryland's beautiful, historic Eastern Shore. (*SEE PHOTOS BELOW*)

At the heart of the region is Talbot County, a mixture of farmland and country estates little changed from the days when the Baltimore gentry summered here in small towns like Easton, Oxford and St. Michael's. That big-city exodus is still happening today, though the contemporary lords of Baltimore are more likely to arrive by motor yacht than horse-drawn carriage.

One power couple I met during an afternoon in St. Michael's planned to boat back to the city that evening, though their friends, power players in from D.C., were trying to convince them to stay the night.

Even those of us with considerably less Beltway sway can find plenty to love on the Eastern Shore. Here were six of my favorites on a recent visit.

Chesapeake Bay Maritime Museum:
Spanning an 18-acre campus, this nautical museum is a temple to the area's "watermen" who created an economy from the bay. Exhibits on crab picking, sailboat racing and ecology are so well done as to fascinate even the most indifferent visitors -- I witnessed teenagers enjoying the place.

Old-School Inns:
Have you ever wistfully read a Hemingway novel and pined for the days of old when a tavern with strong drinks and hearty food had comfortable rooms just upstairs, the height of turn-of-the-20th-century travel elegance? The Eastern Shore has one in the Robert Morris Inn, a downtown icon dating to 1710 that got new life in 2010 when local chef Mark Salter reopened the restaurant and hotel. The Combsberry is another good option, a bed and breakfast hidden away on its own pastoral parcel a few minutes outside town, with a secluded bit of waterfront and fantastic morning service to jumpstart your day.

Oxford-Bellevue Ferry:
Many destinations brag about their history, but a hundred years is little more than an adolescence by Eastern Shore standards. A trip on the Oxford-Bellevue ferry may only take 10 minutes, but along the way, you'll have the chance to consider the fact that this passage across the Tred Avon River has survived both World Wars, the Civil War and even the American Revolution: The first ferry on this critical Eastern Shore route shoved off way back in 1683.

White-Glove Waterfront Dining:
In my experience, most of the food on the Chesapeake is of the down-and-dirty, pick-your-own-crab-meat sort, a culturally significant (and delicious) buffet hauled from the waters of the bay. Not the case at St. Michael's Inn at Perry Cabin, where Sherwood's Landing offers impeccable fare, a vast array of wines, expertly crafted cocktails -- and a stunning view of the pleasure boats coming and going in the harbor.

Small-Town Pleasures:
As befits a weekend getaway, there's a hunt for nostalgia among visitors to the Eastern Shore. In Oxford, for example, directions are given in relation to "The Strand" along the waterfront or, as one brochure situates The Scottish Highland Creamery, "behind Schooner's by the boat ramp." There's an element of timelessness here, with American flags on porches waving in the breeze and bikes meandering down quiet lanes. In St. Michael's, an evening passeggiatta to rival those in Italy is probably the biggest ticket in town.

Space!
The Eastern Shore is a quick drive from Virginia, which in fact shares part of the DelMarVa peninsula with Maryland. There, on Wallops Island, you'll find a nacent space tourism industry, including upcoming orbital launches. Given the Eastern Shore's popularity with D.C. insiders, you might just bump into some aerospace movers and shakers when you get back to town -- after you enjoy some rocket-fueled thrills.

Below, take a look at a number of photos and additional information from the Chesapeake Bay Maritime Museum. 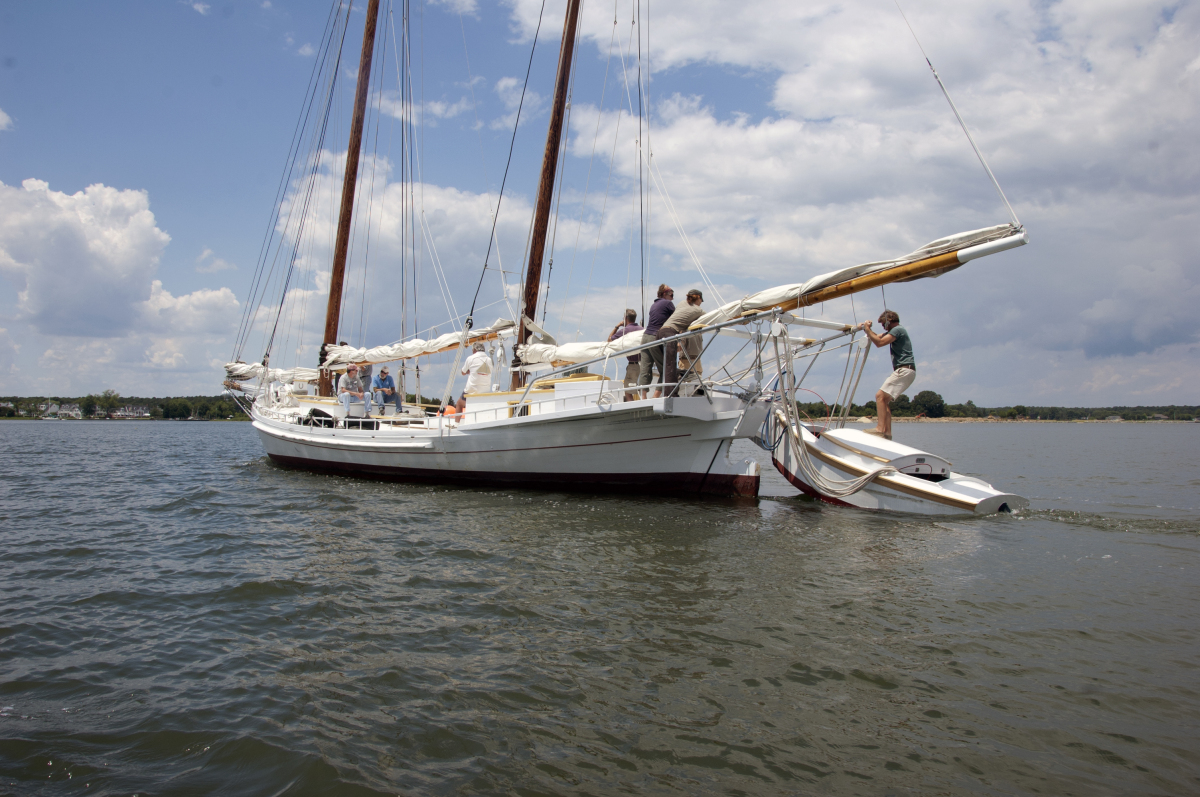 1 / 27
The boatyard crew of the Chesapeake Bay Maritime Museum takes the 1889 nine-log bugeye and National Historic Landmark, the <em>Edna E. Lockwood</em>, out for her first sail in nearly a decade. After several years of repairs, the <em>Edna</em> is ready to venture out on the Miles River in St. Michaels, MD. Vessel Maintenance Manager Michael Gorman stands on the push boat, used to push the bugeye in and out of the harbor, as bugeyes do not have an internal engine. When not in use, the push boat is carried at the stern of the boat.