"Yes, I desire that pink sphere" a young woman says, in French, pointing to a pink globe amongst shelves stacked with oranges and orange soda. A man in all black retrieves the sphere, asking "This one?" He's wearing stilts, a hairnet and pale greenish face paint.

"Yes, that is the one," the woman responds, placing it into her orange purse. It perfectly matches the surrounding soda and fruits. She then grabs a neon green Swiffer which she refers to as a "spear." Shortly thereafter, a man with green hair skateboards through the set.

This is "Easternsports," the contemporary art world's absurdist take on a soap opera. 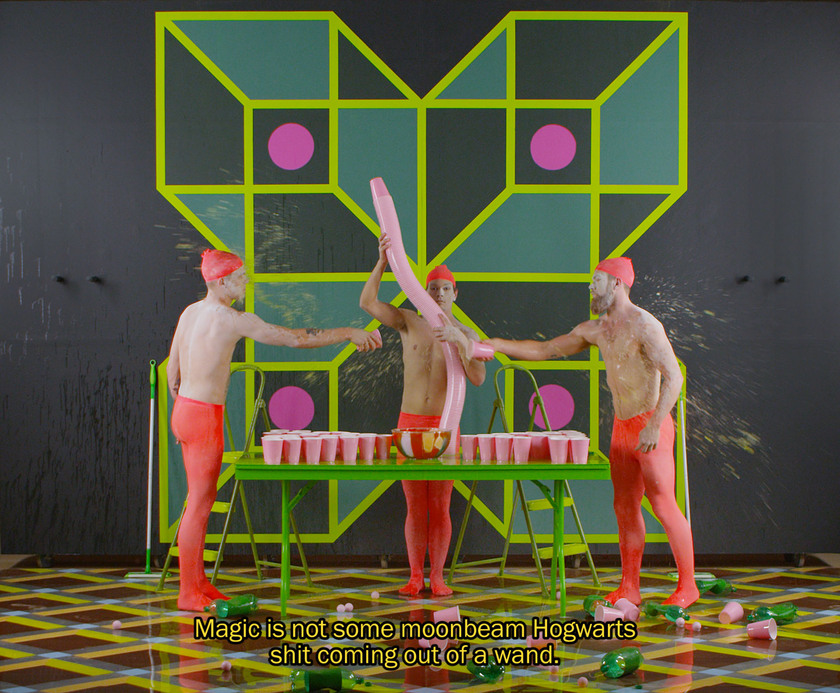 The in-the-round video installation is a collaboration between Jayson Musson, known primarily for his Coogi sweater-inspired paintings and his YouTube alter-ego Hennessy Youngman, and Alex Da Corte, known for his electric environments that explore the objects consumerism leaves behind. For this piece, however, the two Philadelphia-raised artists ventured into more unknown terrain, Musson creating the text for the piece and Da Corte working with video.

"Easternsports" is loosely based on Thornton Wilder's 1938 play "Our Town," which tells the fictional tale of two small town Americans growing up and falling in love. The vignette-heavy telenovela revamp infuses Wilder's original with colorful influences ranging from Don Quixote to Ja Rule to David Lynch. The unearthly sets are full of sharp angles, acidic colors and everyday objects in alien scenarios. Just watching the preview feels like visiting the 99 Cent Store in a sugar-induced dream.

The piece's title, "Easternsports," references a poem Musson created in his early twenties, commenting on the Western relationship to Buddhism as something to be tinkered with. "It's a comment on the notion that, as Westerners, our identities are not fixed," he explained to Paper Magazine. "From our position of privilege we're able to explore or dabble with cultural exports from other parts of the world, religion being one of them. Westerners are encouraged to 'find themselves' and in that process we try on, then discard many ideologies, thus reducing them to trite intellectual garments, or a light pastime much akin to sports."

The piece, which was scored by Blood Orange's Dev Hynes, recently opened at the Institute of Contemporary Art, University of Pennsylvania. We reached out to Musson and Da Corte to learn more about their technicolored visions and pop culture inspirations. 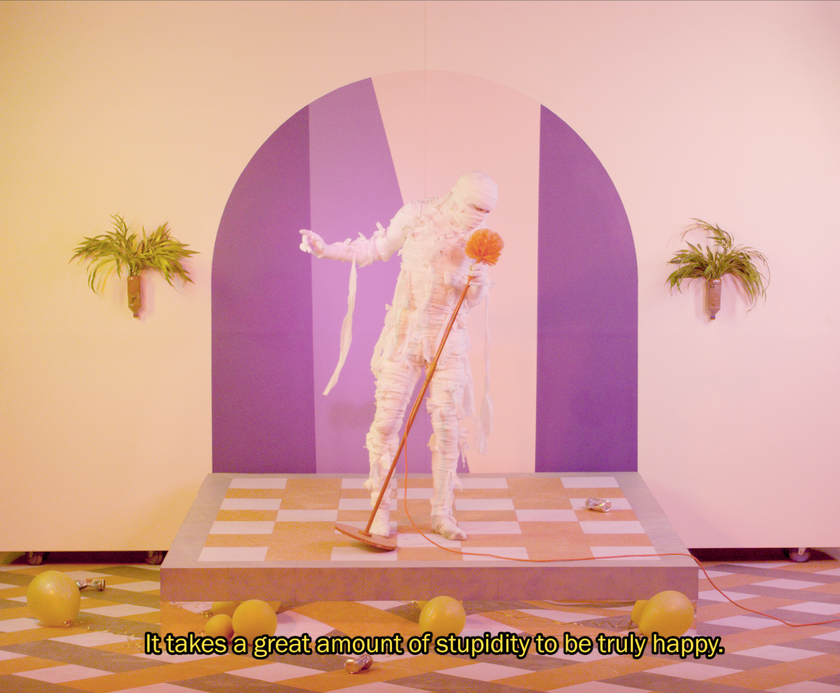 When I think of "Our Town" the first thing that comes to mind is the minimalist (basically non-existent) set. Is the visual overload of "Easternsports" reacting to that minimalism?

Alex Da Corte: When I first designed the sets for "Easternsports," I was thinking of Thorton Wilder’s desire to create characters that were aware of their own theatricality -- mini versions of Don Quixote who live in their imagination when the world doesn’t deliver what one needs. So the sets, became stilts or ladders for these characters to achieve what they need. For Thorton, the characters' desires were simple and the props needed to perform them, the same. In "Easternsports," each set is a stage for one or multiple individuals to fully support and produce a ritual of their liking that allows them to perform their desired lifestyle to the fullest. If these stages are seen as overload (even though I sort of disagree), the maximal set reveals the complicated systems of support we construct to perform these ideologies on the daily.

Jayson, you mentioned the origins of the title "Easternsports" in an interview with Paper. On that note, is learning the new shopping? If so, would that be better or worse?

Jayson Musson: Shopping, i.e. acquisition, is definitely a form of learning, but in terms of it replacing traditional learning, which is what I think you mean, I’d have to say ‘nah’. Because if that was the case, those who possess the most would be the most learned. And rich people are generally dumb. If anything, shopping begets more shopping, possessions demand companion possessions, and surrounded by all these items, a certain emptiness sets in. But I do like shopping though. My Amazon Prime game tight. 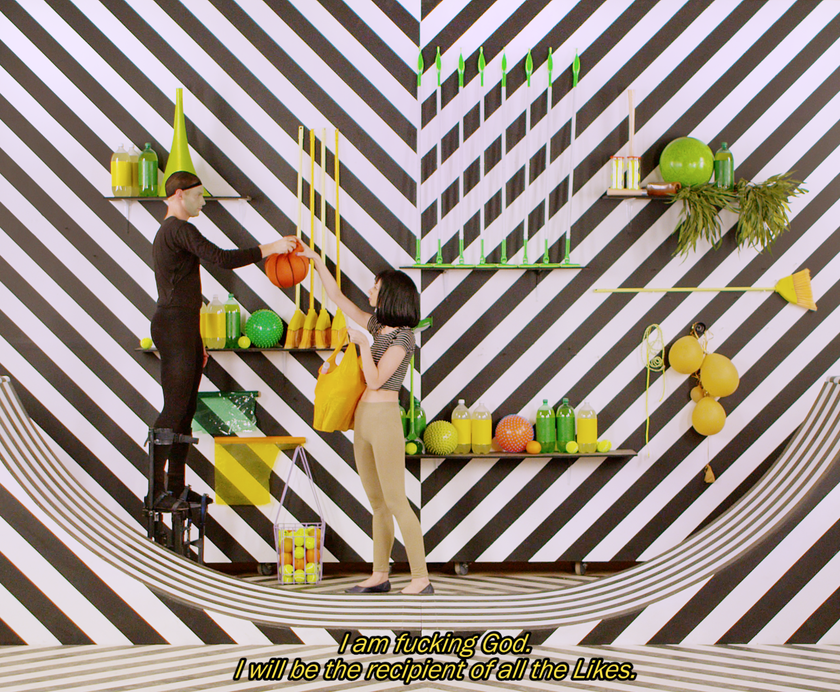 How did you settle on soap opera as a medium? It's such a traditionally emotional and lowbrow art form that feels totally alien to the cool and critical norm of video installations. And how does the multilingual aspect factor in?

ADC: For starters, soap operas always remind me of laundry detergent -- I guess because I used to watch them when I stayed home from school while my mother folded laundry. Originally, my interest in soap operas grew from their flatness, due to the melodrama and the stage design common in cheap television production. In one of the first soap operas, "Painted Dreams," produced a few years before "Our Town," the focus was concentrated and humble -- their goal was to paint a portrait of a family, and the complicated systems contained within one. Similarly, "Easternsports" paints a picture of a family, the family of my dreams.

I am not concerned with “cool or critical norms of video installations” as a gauge for choosing to make what I want to make. This show grew out of a strange, funny and constant dialogue between Jayson and myself, about the world, our families, and our friends and that, to me, is very cool. I grew up in a bilingual home watching most of my television shows in Spanish, some of which were telenovelas. As I recall, there was a heightened sense of viewing when I couldn’t completely understand all of the language. With Jayson supplying the 12,000 word script, it made sense to employ this Brechtianesque technique in order to highlight Jayson’s use of language as a guide for the visuals.

JM: The multilingual aspect of the project, which there is actually very little off, stems out of a notion of performance. As a writer as well as ex-dabbler of performance art, the multilingual element of "Easternsports" was to exist as a way for me to transpose my voice and occupy a space other than the one I currently fill as myself Dr. Male HeteroNormativeCisGenderedFella. Like a reverse Donelle Woolford of sorts; like “Can this wily negro possess the authority to put words into the mouth of white woman?” But like I said, there’s not much of it now, we wanted the viewer’s internal voice to take primacy over the voice of the possible various narrators. 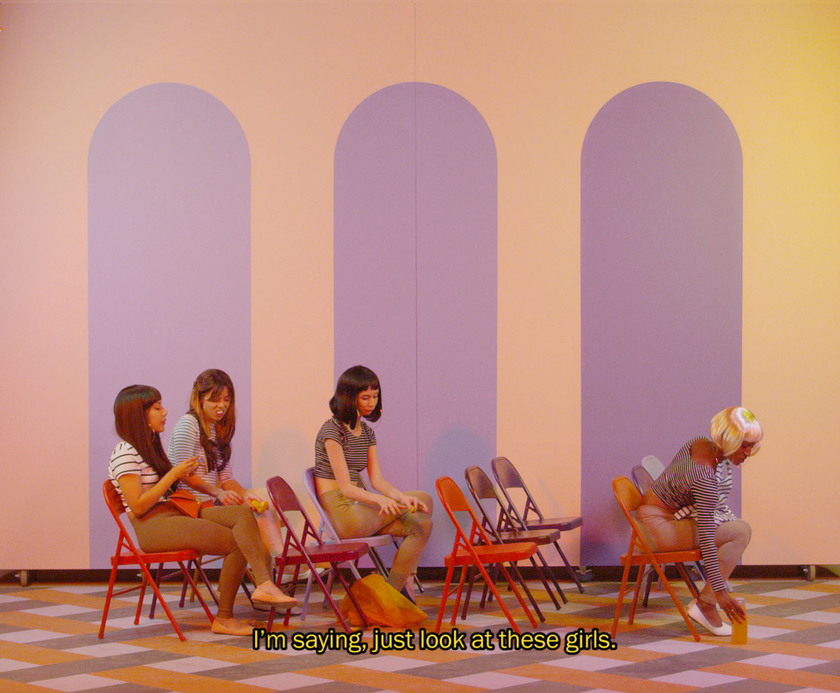 Alex you mentioned that Dev Hynes is also a synesthese. Do either you or Jayson experience synesthesia?

ADC: Yes he is. Did I mention he is also a fucking wizard? I am most definitely tone deaf but I do love colors and music very much. Jayson is also tone deaf, I think. Have you heard him sing? As far as what synestheses see and hear, I couldn’t really say. Dev explained to me that the ways in which the score was composed follows the rhythm of the colors as they enter and exit the screen. I make most of these videos as moving paintings, and think of them in terms of music regarding pacing and crescendos, so it was really magical to see Dev make those actions come to life with his music.

If my high school memory serves me correctly I'd say "Our Town" centers around family, love, faith and death. What four key words would you use for "Easternsports?"

JM: I would like to replace family with ‘Oranges.’ 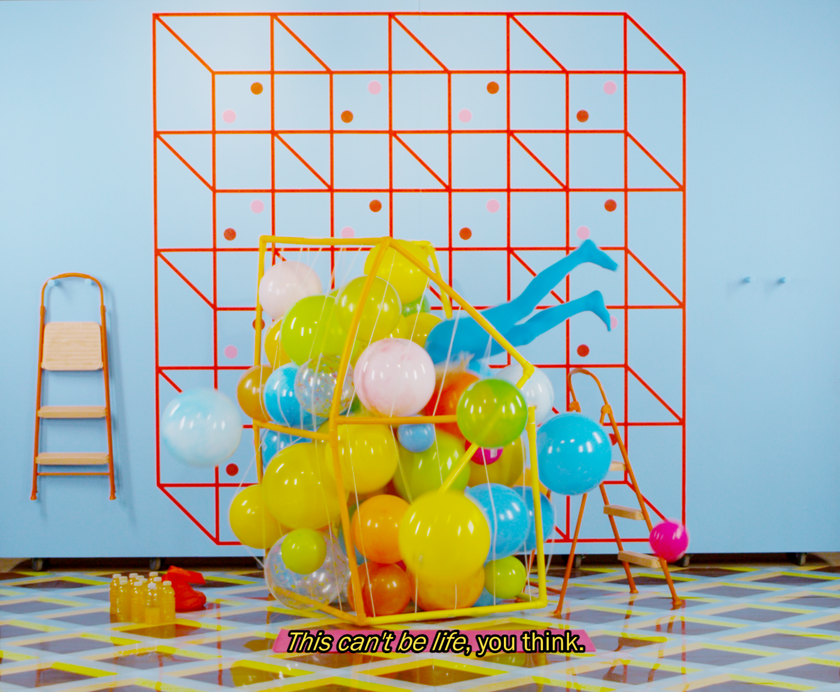 What in the piece was inspired by Ja Rule?

JM: At the end of Scene 1 there is a narrative passage about a special land populated by the heroes and icons of yesteryear. Ja Rule makes an appearance playing an N64 on a beach by himself. The faded rapper and the faded gaming system are pretty apt metaphors for the inevitable place our culture’s most celebrated entities end up: put through the grinder and mashed to dust.

Is there anything that strikes you as distinctly Philadelphia in the work?

JM: It’s funny, last night me and Alex went to dinner and afterward on the drive back to the apartment I crash at when I’m in Philly, I told Alex of this time I was walking on Ridge Ave at 4 a.m. with my friend Kurt way back when we were both toy ass graffiti writers in the early aughts. Anyway, as we walked up Ridge Ave, these four kids who couldn’t have been any older than 10 years old come scurrying out of an alley about a block up from us. The kids ran to a stoop that faced the alley they just exited and they all watched the alley with a lot of excitement and interest. As Kurt and I approached the entrance of the alley we finally saw what they were so excited about; a car was on fire in the alley, presumably lit by them, and they were just sitting on this stoop enjoying their craftsmanship. I’d like to think of "Easternsports" as me and Alex’s burning car in Philadelphia. Set on fire with much love and curiosity. 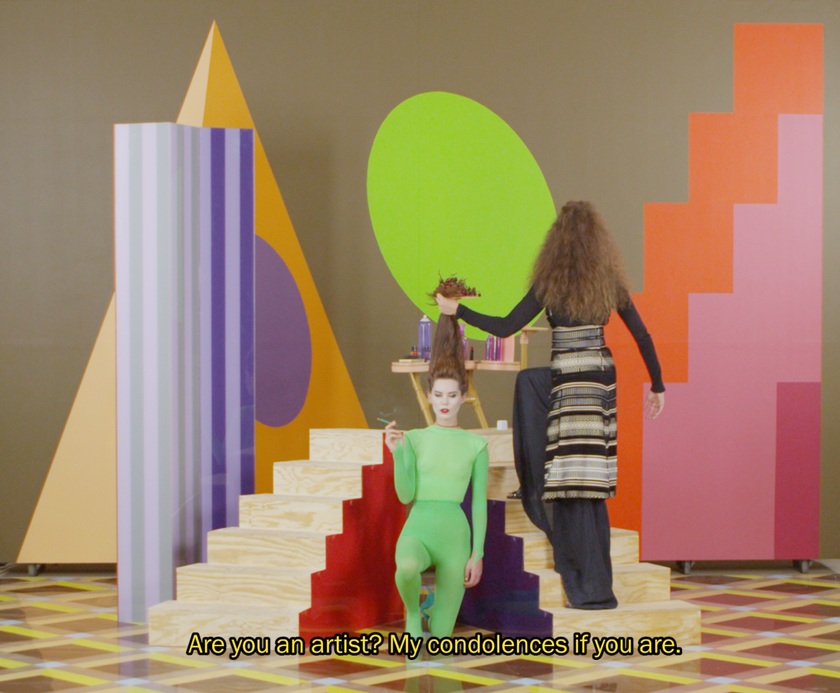 Last question: What are the strangest rituals that make up your daily life or identity?

JM: Hmm, probably that every morning I wake up, look at my naked body in my bedroom mirror and think to myself: “Your profanity knows no end.”

ADC: I have to agree with Jayson. 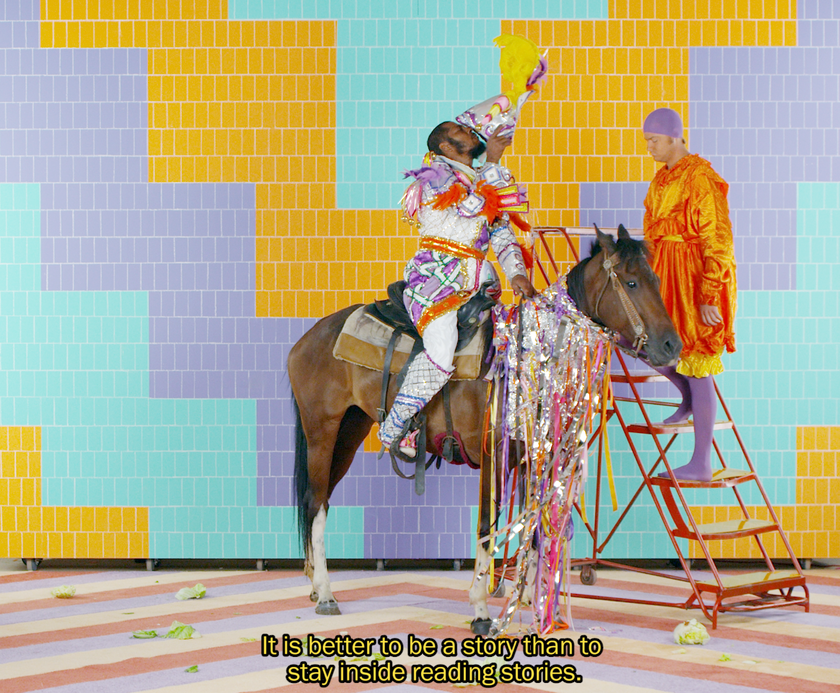 "Easternsports" runs until December 28 at the Institute of Contemporary Art, University of Pennsylvania. See a preview of the piece below.