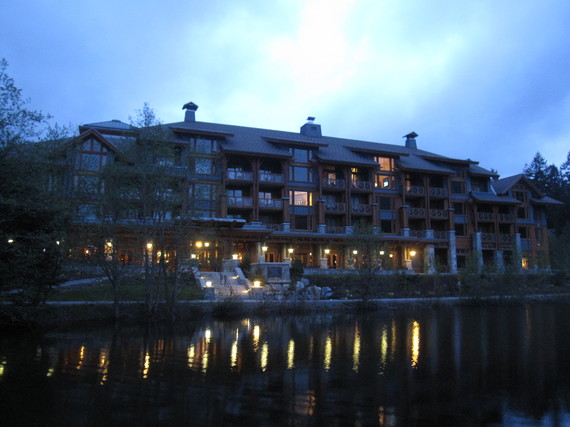 If you've spent any amount of time in the woods, there are some basic survivor skills that even city boys like me know, including a big one surrounding a certain animal: the bear. With a grizzly, which can turn into a walking death machine, you're supposed to play dead. Sure, some people like Timothy Treadwell chose to commune with these beasts, and if you saw the movie Grizzly Man, we already know how poorly that ends. Conversely, with the smaller, less menacing black bear, legend has it that you're supposed to get big and loud. In an encounter with either bear, there's no point in trying to run, since they can run over 30 miles per hour. Since I've never been able to achieve car-like speeds, math clearly favors the bear. Fortunately, on a visit to Whistler in May 2011, I had a chance to test all of these theories as I came face to face with a black bear.

It was past 9 p.m., and the sun was just starting to set over British Columbia when I completed a gut-busting dinner at my hotel, Nita Lake Lodge. Instead of risking a button-popping incident by sitting down at the bar, I set out for a walk on Valley Trail, a paved path that leads from the back door of the picturesque mountain resort where I stayed and dined. I wound through towering pine trees to reach Lakeside Park, where I saw a passel of kayaks tied up at the dock, and a woman fishing from a pier. To call the scene bucolic would be an understatement.

Maybe I lingered too long, because by the time I walked back down the path, dusk had fallen over Nita Lake. As I rounded the bend, I could see lodge lights in the instance. Unfortunately, I could also see a black bear lumbering directly towards me, about 50 feet away, that looked to be about chest-high on me...on all fours.

With a rock face to my left and Nita Lake to the right, I quickly realized that there was basically no escape route. The last thing I wanted to do was get in the water with a bear, especially since I'm about as good at swimming as I am at bobsledding, so I stood my ground and relied on bear lore.

Apparently bear stare-downs don't inspire peak creativity, since the best thing I could think to yell was "Hey!" Clearly, the bear wasn't impressed, since he/she continued walking right towards me. I grabbed my iPhone and put on music as loud as possible. It was Eazy-E, "Only If You Want It." Clearly, the late N.W.A. co-founder and notorious "gangsta'" rapper has more pull with the natural world. The bear slowly swerved to my left and climbed over some rocks and up a steep hill, leaving nothing but wet paw prints in his/her wake. I made sure to hightail it back to Nita Lake Lodge.

It was about a quarter-mile walk to the hotel, and en route, I saw three people. I told them all there was a bear up ahead, in case they wanted to avert disaster. The first guy asked how far, I remembered I was in Canada, quickly converted to the metric system and said, "About 100 meters." He continued ahead, unfazed. Next I told a passing couple, and the guy said something like, "Oh it's cool. Thanks though," and they continued into the night. Back at the hotel, I saw the GM and bartender on the way in, and they said it was pretty common to see a black bear. The next day, I learned that the bear probably would have been more interested in clover than in devouring a smog-smoked Angeleno like me. Still, for that brief moment on Valley Trail, the outcome of my showdown with the bear was very much in doubt, and it was good to know that Eazy-E had my back.

Joshua Lurie is the L.A. based founder of Food GPS and produces culinary events.