The average moviegoer may enjoy the film version of Elizabeth Gilbert's bestselling book, Eat Pray Love. The movie doesn't require much effort on the audience's part. All one needs to do is sit and be led to believe that one is witnessing a major transformation taking place in the life of a troubled writer named Liz (played by Julia Roberts). But anybody who truly understands (or wants to) the art of real personal triumphs--transformations that hit you to the core and set you sailing somewhere profoundly new--must know that real change can be hard work.

How could one appreciate what lies on the other side of it if it wasn't? If real change were that easy, then we really wouldn't be interested in seeing a movie like Eat Pray Love in the first place. We want answers, sure. But we also want to be inspired to find ways to find those answers. And therein lies the problem if not the irony of the film. 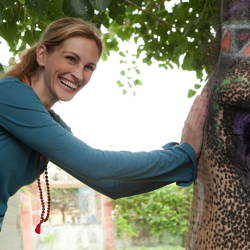 You never really believe Julia Roberts' performance. You never buy her tale of woe. She doesn't convince us (enough) that her Liz is thirsty for anything real and true and divine; or that she has really learned a damn thing by the time her "moment of truth" hits her in the third eye.

For those who don't know Gilbert's real-life story as told in the book--truthfully, the read only really captured my interest midway through when the author stopped whining and starting wine-ing--here's the lowdown: Liz, for some reason we never really understand (moreso in the film), is an emotionally troubled yet successful writer. She's not happy in her marriage so she divorces her husband (Billy Crudup) who still loves her. She's not much happier with a younger lover (James Franco) so she dumps him, too, opting to take an entire year to find herself. She spends four months in Italy, another four in India and then the last round of her adventure in Bali, where she reconnects with a Balinese medicine man she met long ago.

In each portal, Liz explores a different art form of sorts--in Rome, it's all about making love to food; in India, at an ashram, it revolves around a more spiritual orgasm, more or less; and in Bali, it's about crawling under the covers with something deeper: self love; loving others. It doesn't work. Not on screen anyway. Director and co-writer, Ryan Murphy, the creative stud who spawned Glee and Nip/Tuck isn't able to go deep enough with the characters (even though he does lift some of Gilbert's prose straight from the book for narration). Liz seems frustrated, sure, but there's no real sense of struggle or search--or that there's really anything at stake--as we witnessed to more winning ends in a film like Under the Tuscan Sun, which made you root for, even appreciate, the protagonist. You don't here.

Although two actors are believable: Richard Jenkins (The Visitor) and Javier Bardem (No Country For Old Men). Why are they believable? They're "alive." Jenkins, who plays a Texan named Richard who befriends Liz at the ashram, is able to evoke compassion, some concern for his well being. He's also likable. Ask yourself if you feel the same way about Liz when you leave the theater. Meanwhile Bardem is the best thing in Eat. His character, Felipe, encounters Liz in Bali, and comes across as the real thing.

One can't blame the filmmakers or the actors for that matter. The film does strike some chords. Women, even men, were wiping away some tears, in the screening I attended, which showed me two things. 1) as a culture, we're starving for some real connection; something we can grab onto and make sense of us, probably the most ironic of circumstances considering most of us believe we're communicating better with all the new technology out there. 2) Few are up for the challenge of doing "the work," the real spiritual work that requires us to look at the real motivations behind the actions we take. You want to know yourself? Look at what's motivating you.

(God knows I can include myself in that category. And for a real motivating outing, just read Geneen Roth's Women Food and God--think of it as what's underneath the frosting that is Eat Pray Love).

Parting thoughts: If you really step back far enough and detatch--image that during these Tweeting times--you can see that a film like Eat Pray Love is a delicious exposé on how willing we are to glamorize enlightenment. Yes. This is a movie. It's an escape. But tell me if you rush out of the theater eager for anything. (Other than pasta and red wine, which, in some circumstances, is enlightenment in and of itself.) Still, when all is said and prayed for, the bottom line is this: Real transformation can be hard work. Nobody can do it for you.

Not even Julia Roberts.