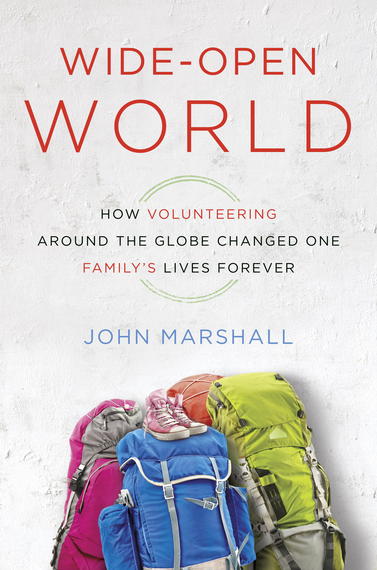 The book's website had me at Eat, Pray, Love and passed the ultimate test at page 244 when it made me cry. I'm talking about Wide Open World by John Marshall.

This first book by Marshall, an Emmy Award winning producer is described as "Like Eat, Pray, Love for families: the inspiring story of an ordinary American family that embarks on an extraordinary journey."

And it certainly is an extra ordinary journey, that takes the family from the jungles of Costa Rica to the paddy fields of rural Thailand, to organic farms in New Zealand and finally to a heartbreaking orphanage in Northern India.

But the Marshalls are no ordinary family. They're ballsy and they're adventurous; and there'll also a bit desperate.

"Like most every other teenager in America, our daughter was totally addicted to Facebook and her cell phone. What if we could unplug her... wouldn't that be worth almost any price?" writes Marshall.

He describes his relationship with his wife Traca, like this:

"A little distant, a little cold, a little less happy. It's not that we were fighting or even angry... We just didn't seem to be on the same page."

He is hopeful that six months of travel adventures will "heal us again."

So the Marshalls pull their two teenagers out of school, rent their house to a highly dubious tenant and take out a home equity loan.

But this isn't any expense paid luxury trip, sponsored by Conde Nast. No, the Marshalls do it on their own dime, and since they don't have many of those to rub together, they volunteer their way around the world, cleaning out cages of endangered species, ripping out weeds as far as the eye can see, teaching English in roasting hot classrooms and organizing talent shows for orphaned and abandoned children.

As the book begins, there is something rather self-absorbed about John Marshall's writing, so when he meets a tiny but vicious monkey named Sweetie at their first destination in Costa Rica and gets savagely mauled, his important lesson in humility seems, well... timely. Though painful to read at times, it's fascinating to see the family dynamics at the nature reserve, where roles are reversed and the humans become caged and the animals fierce and dominant.

On the other hand, some of Marshall's observations about Logan, his 17-year-old son and Jackson, his 14-year-old daughter are refreshingly candid and downright hilarious. His fights with his daughter reflect the always-connected reality of teens today. Yet, as the journey progresses, she learns to be in the moment and you can't help celebrating with him.

Marshall reflects on how his kids become more and more willing to do manual labor as their six months on the road progresses. By contrast, he recounts an evening back home when he and his wife asked for their daughter's help in after-dinner cleanup and she flipped out completely.

"It was like we asked her to dig the Panama Canal!" he writes.

That and other similar family revelations made me laugh out loud.

Although Marshall does share some tender moments with his wife Traca, he seldom writes about her, and their relationship remains distant, as though they're on parallel paths. I keep expecting that he's saving the grand rapprochement for the ending.

He writes poignantly about a wise man who tells him, "She's like a bird with a shadow over her."
And the mystery remains.

The book really hits its stride when the family spends time at an orphanage in India, and Marshall forges a powerful connection with a little orphan named Job. He's a cheeky little fellow, who lectures Marshall on religion and politics and yet is fiercely loyal and protective. When it's time for the Marshalls to leave, little Job is heartbroken and writes him this note (typos from original):

"Dear Uncle John, May God Bleass you. I will miss you very much. Pleas come back. Thank you for everything you have gived us...I will awals rember you. God send a gift for me and you are the gift. Thank you. Love from Job."

This is where the grand epiphany happens and Marshall sums it up beautifully, like a call to action for anyone wanting to volunteer, whether you go half way round the world to find the right opportunity, or simply help out at your local soup kitchen.

This is where I cried.

"I'm including Job's note here for what it says about the power we all have to affect the lives of others, just by reaching out, by trying, by showing up. We don't have to save the world or even have much of a plan. We just have to place ourselves in the same room where there is need and see what happens... All it takes is a little faith and a willingness to give. It's almost selfish really. For if I touched Job's life, he most certainly touched mine, and that is both the beauty and the reward that all giving holds."

As the book cover promises, the Marshall family is forever changed, but you'll have to read the book to find out exactly how. I don't want to spoil it for you.

Postscript: John Marshall promised Job he'd come back to the orphanage and he's following through. He recently launched an Indiegogo campaign where you can donate, get a copy of his book and help extend the orphanage.