The idea of eating with Queen Elizabeth II sounds pretty great -- who wouldn't want to receive an invite to a dinner at Buckingham Palace? But Darren McGrady, the Queen's former personal chef of 11 years, describes a dining scene that sounds even more intense than we thought.

Sound a lot like "Downton Abbey"? What went on in the staff quarters was just half of it -- actually eating a meal with the Queen sounds like one of the most high-strung, nerve-wracking dining experiences ever. 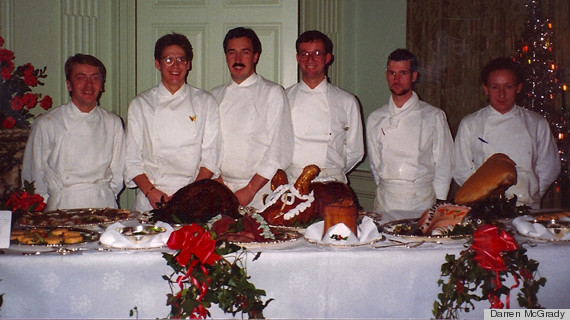 1. The ingredients are intimidatingly top-notch.

"I remember being the pastry chef at Windsor Castle," McGrady says. "When I ordered 24 pears for a lunch party the Queen was having, the vegetable supplier from London would drive an hour to Windsor Castle and bring six boxes of pears -- so about 100 pears for me to choose the 24 I wanted." The Queen also redefined the whole "eating local" concept. "She liked any venison or pheasant or grouse," he says. "If it was shot on the royal estate, she loved to have that on the menu."

2. If you so much as chip a plate, you're destroying a piece of history.

"We had the best silver, gold and china to serve on," he says. "For a state banquet, all of the knives and forks were gilt gold on silver. All of the china was hand-painted Meissen china, dating back to the early 1800s." As for the cookware? It's all over 100 years old. "Our copper pans dated back to the 1800s," he says. "They still had Queen Victoria's motif on each copper pan." 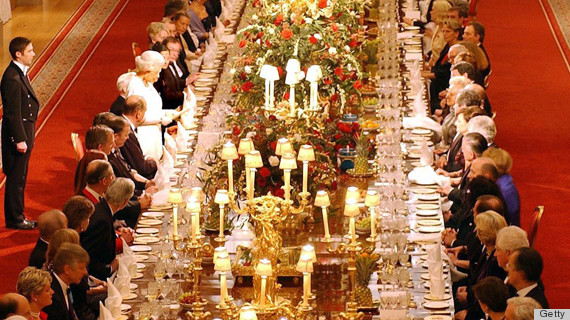 Guests at a state banquet at Windsor Castle

3. You have to eat at least as quickly as the Queen if you don't want to go hungry.

Yes, there are plenty of servants around to attend to your every need... but they're on the Queen's eating schedule during formal banquets. "The Palace steward would stand behind the Queen," McGrady says. "As soon as she put down her knife and fork from the first course, he would hit the button for the lights to signal the footmen to come in. The course was over and they'd start clearing -- even if you hadn't finished, they'd be clearing the table."

4. When the Queen enters the kitchen, everything grinds to a halt.

"If the Queen came down to the kitchen at Windsor Castle or Balmoral or Sandringham, we were told that we were supposed to stop what we were doing, move the pans to the side of the stove, step three paces back and bow," he says. "We couldn't work or anything else, just answer questions. Then when she'd gone, we could carry on cooking." Just imagine if there was a soufflé needing to be taken out of the oven -- catastrophic.

When she isn't traveling or hosting guests, the Queen sits with Prince Philip at a small table in Buckingham Palace for dinner -- and no, they never just get lazy and order take out. "She would actually have a first course and then a main course with a salad and some fruit as dessert," McGrady says. 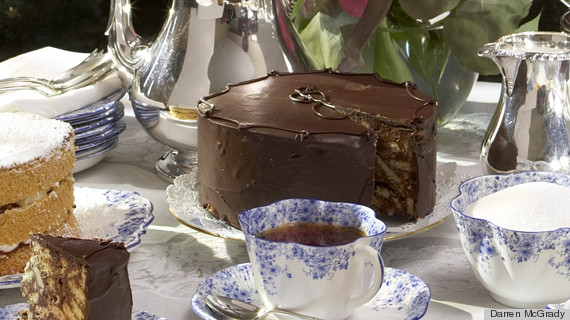 6. If you don't like chocolate, you're out of luck.

7. Oh, and don't even try to out-dress the Queen at the table.

Whenever the royal family would travel to Balmoral Castle and Sandringham House, they certainly didn't pack light. "They would dress so many different times," McGrady says. "First thing in the morning coming down for breakfast they'd be dressed. Then they'd go off hunting or shooting and come back. Then they'd shower and change to go into afternoon tea. And then they'd change again for dinner."

Make sure to check out Darren McGrady's Eating Royally for more anecdotes and recipes from his time with the Queen.

Method:
1. Lightly grease a 6 inch by 2 ½ inch cake ring and place on a tray on a sheet of parchment paper.
2. Break each of the biscuits into almond size pieces by hand and set aside.
3. Cream the butter and sugar in a bowl until the mixture starts to lighten.
4. Melt the 4 ounces of chocolate and add to the butter mixture whilst constantly stirring.
5. Beat in the egg to the mixture.
6. Fold in the biscuit pieces until they are all coated with the chocolate mixture.
7. Spoon the mixture into the prepared cake ring. Try to fill all of the gaps on the bottom of the ring because this will be the top when it is un-molded.
8. Chill the cake in the refrigerator for at least three hours.
9. Remove the cake from the refrigerator and let it stand while you melt the 8 ounces of chocolate.
10. Slide the ring off the cake and turn it upside down onto a cake wire.
11. Pour the melted chocolate over the cake and smooth the top and sides using a palette knife.
12. Allow the chocolate to set at room temperature.
13. Carefully run a knife around the bottom of the cake where the chocolate has stuck it to the cake wire and lift it onto a tea plate.
14. Melt the remaining 1 ounce of chocolate and use to decorate the top of the cake.