This story is part of "Eat The Enemy," a HuffPost series on edible invasive species, non-native plants and animals you can help contain from the comfort of your dinner table.

Asian carp were never supposed to live in North American waterways. Like many other invasive species, they were introduced by humans in an attempt to address another problem, namely to remove algae from catfish farms and wastewater treatment ponds in the 1970s. But sometime in the next two decades, the fish escaped their enclosures -- most likely due to several large floods in the '90s -- and began to spread.

Over the past 15 years, populations have exploded, as the carp outcompete native fish populations and quickly reproduce through the tributaries of the Mississippi and Illinois rivers while moving north to the Great Lakes. And they've become a huge problem.

The name "Asian carp" is actually an umbrella title for four different species: bighead carp, black carp, grass carp and silver carp. Some of the larger species can weigh up to 100 pounds and have an uncanny ability to jump out of the water. Females can produce upwards of 2 million eggs, and some of the fish can live for 20 years.

The Obama administration has spent more than $200 million trying to control their spread, including building a series of electrified barriers to try to deter the fish from swimming closer to the Great Lakes. So far, those efforts have failed, and the carp have been seen less than 40 miles from Lake Michigan. Should the animals reach the lakes, they have the potential to devastate local ecosystems and a $7 billion fishing industry. But the U.S. Army Corps of Engineers says any fix, if one that works can be found, would be neither easy nor immediate, and it could cost billions more than has already been spent.

But an increasing number of scientists, and chefs, are calling for a far cheaper means to help contain the alien species -- putting them on the dinner plate.

Dr. Quinton Phelps, a fisheries ecologist at the Missouri Department of Conservation, has been on a mission to convince people to take advantage of the underappreciated protein source since he began studying it in in the mid-2000s. He says the fish weren't really on anyone's radar as little as 10 years ago, but these days you can steer a boat down the Mississippi, and as soon as the carp hear the sound of the motor they'll start "popping up like popcorn" out of the water. They can be 100-pound torpedoes that leave boaters with black eyes and broken noses.

But even more importantly, they act like underwater vacuums, eating huge amounts of plankton and algae that other fish rely on, which has "this huge deleterious effect," Phelps told The Huffington Post. In some waterways, they now make up nearly 95 percent of total biomass after out-eating nearly every other native species.

For ecologists like Phelps, convincing people to eat the carp is a no-brainer. They're nutritious, cheap (free if you can catch them -- and they literally jump into your boat) and damn tasty. 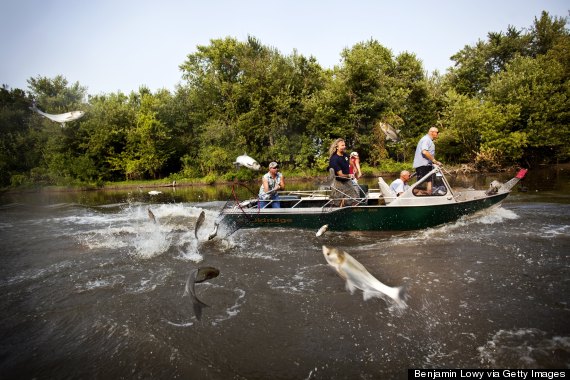 A research team at the University of Missouri did a blind taste test last year, and the carp won handily over the far more popular catfish. Phelps' team conducted a similar taste test and found diners preferred the carp 2-to-1 over catfish and tilapia, regardless of cooking method.

"The best part about it is that you're eating green, you're doing something to ensure the sustainability of other native foods by consuming this critter," he said.

Eating carp may be a new thing for Americans, but the fish have been a staple in Asia for generations. There's not much of a local market unless you decide to go out and reel in your dinner, but some entrepreneurs have begun catching and exporting fish from the Mississippi River Basin and hawking it. It's often marketed as "Kentucky white fish" and has become a popular alternative to local, farmed carp in places like China.

But the biggest challenge for Americans is the name. Phelps, whose department leads 20 to 30 workshops on the fish every year, says people hear the name carp and immediately begin to think, "Ew, that's gross." Other chefs have tried to go with the rebranding route, like that of the Chilean sea bass or orange roughy -- formerly known as the Patagonian toothfish and slimehead -- and get approval to call the carp "silverfin."

In Louisiana, Chef Philippe Parola has made a name for himself by holding invasive-species cooking demonstrations around what he calls the "Silverfin Craze." He's stumped for quite a few other invasives, including alligator, snow goose and nutria, "the best red meat you’ve ever had,” he told Modern Farmer.

Whatever they're called, Parola says once they're on the plate, carp are indistinguishable from any other mild white fish. And unlike other fisheries on the verge of collapse, populations of Asian carp are booming beyond measure, and something has to be done -- so why not dig in?

"If you're at the stage where we're at, and you're having the trouble that we are, we've got to start somewhere, and we have a lot of people in this country that are hungry," Phelps said. "This is the perfect protein source. I say, let's eat 'em."

Asian Carp On A StickRecipe provided by Quinton Phelps

Marinate the fish. Add fillets to marinade (making sure each fillet is evenly coated) and refrigerate overnight.

Make the kabobs. Thread the fillets on soaked wooden or bamboo skewers.

Place the kabobs on the barbecue grill, and cook 3 to 4 minutes on each side (or until done).

Not all invasive species are edible, and some included in this series can be dangerous, including lionfish and wild boar. Please take caution when foraging or hunting for your own food.