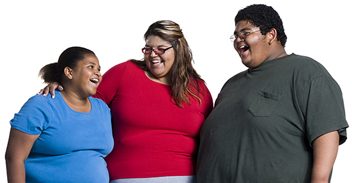 Up to now, the only treatment for obesity that has produced significant long-term weight loss is
bariatric surgery
. Bariatric surgery has risks, is expensive, and 20-30 percent
do not lose weight
, or they regain it. Besides, shouldn't we be treating the underlying cause of obesity rather than the symptom?

You might say, "The underlying cause is poor lifestyle." Yet significantly obese people have the quality of life rating of people with cancer on chemotherapy. If simply eating healthy and exercising would cure their problem, why don't they do so, lose weight, and not be miserable anymore? Something else is going on.


What otherwise might we do? Residential programs, e.g. fat camps and obesity rehabilitation centers, produce large weight loss, not as good as surgery, but much better than traditional programs. Could we replicate what's accomplished at residential centers in the real world at a much lower cost?

How might forced food withdrawal be accomplished in the outside world, similar to residential centers? Withdrawal from food is trickier than withdrawal from a drug, because totally quitting food isn't feasible. Nonetheless, it is feasible both to totally stop snacking and to gradually decrease excessive portions at meals.

What kinds of foods necessitate withdrawal? First, specific "problem foods" of the individual, which produce cravings and are irresistible -- so-called "feel good foods," resembling a "drug-of-choice." Candy, chocolate, soda, pizza, chips (crisps), and fast food are examples. Problem foods appear to be a "sensory" addiction (taste, texture) rather than a direct effect of food ingredients, e.g. sugar, on the brain. Bulimics, for example, vomit/purge, yet still become addicted to sweets. 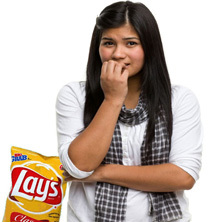 Secondly, non-specific foods -- whatever is available in the moment. Most snacking and mealtime foods are in this category. This is "nervous eating," similar to nail biting and skin picking. The brain tends to glom onto any behavior that relieves stress, in this case eating. A "behavioral" addiction results and involves the mechanical actions of eating -- biting, chewing, crunching, hand-to-mouth motion, and especially swallowing. All overeating represents a mixture of the sensory and behavioral addiction components, although the ratio varies. The combination comprises "eating addiction." 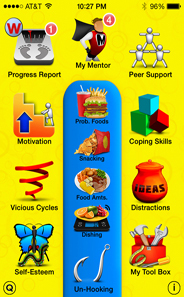 with the app in a peer-reviewed journal.

The app treats the two components separately but in parallel. The sensory addiction component is treated similarly to drug addiction by withdrawal/abstinence, first from each problem food, one-by-one, until cravings or difficulty resisting the food resolve. Next comes withdrawal from snacking (non-specific foods), accomplished by advancing snack stoppage time periods -- morning, afternoon, evening, night time -- with the aim of zero snacking for the entire day. Lastly, withdrawal from excessive portions at home meals is achieved by weighing and recording typical amounts of frequent foods served and incrementally reducing amounts. 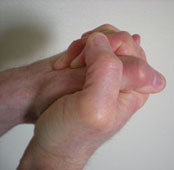 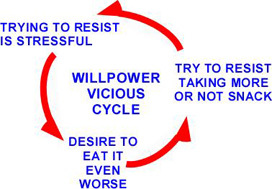 Participants experienced a willpower vicious cycle when trying to resist taking more at meals, or not snacking. Resisting, itself, was stressful, yet they coped with stress by eating -- a no-win situation. A 10-year-old boy exclaimed, "Weighing my foods and trying not to take more when more food is sitting there drives me crazy." His mom observed, "He gets less upset if the food is presented to him already weighed rather than him having to do it." With the mom weighing his foods, this boy happily lost weight until his mom got sick one day. He became so stressed weighing his foods that his mom had to get out of bed and do it for him. His eventual solution was simply relaxing when weighing his foods and then distracting himself.