You probably don't think of Ireland as a culinary destination -- I certainly never did -- but a recent trip to Dublin brought some pleasant surprises to my taste buds. Traditional Irish cuisine has never been considered noteworthy, but as several Dubliners explained to me when I marveled at how good the food was, Irish gastronomy has improved tremendously over the last 10 to 15 years. 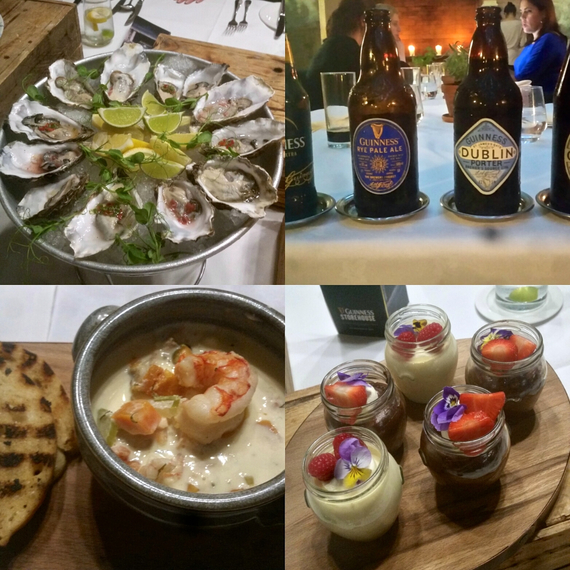 During my stay in the Irish capital, one of my best meals was at 1837 Bar and Brasserie, one of two restaurants at the Guinness Storehouse. Opened in 2000, the Storehouse is located in one of the oldest parts of the city. Ireland's top paid tourist attraction, it's essentially a Guinness museum that's viewed as the holy grail by many a beer lover. 1837 was just opened in 2016.

The eatery is named for a significant year in Guinness history, when British Prime Minister Benjamin Disraeli raved about the pleasures of matching up Guinness with oysters. 1837 offers that particular pairing, along with a number of other dishes, seafood and otherwise, that pair beautifully with their beers.

Most people associate Ireland with potatoes, corned beef, and stew, but being an island, Ireland's surrounded by water, so a bounty of fish and seafood is always ready to be plucked from the sea. In addition, this small country of four and a half million people doesn't have the massive agricultural industry that we do in the United States. Ireland's farms are small, so pretty much all the produce is organic, by default if not decree. The cows are all grass-fed, making the butter and other dairy products extremely flavorful. The meats are of very high quality. Food doesn't have far to travel in this small country, so it's all very fresh.

While at 1837, I asked Executive Chef Justin O'Connor about the evolution of Irish cuisine. He told me:

It's cosmopolitan now. It's not New York or Chicago but it's evolved. Our food has come of age. When people think of Irish food they think of stew and potatoes, potatoes, potatoes. Those should never go away, but international cooking from around the world is now the thing.

What do you think makes the food here special?

We use locally sourced food, and it's very local. I use the fish monger around the corner. We have a local bread man that makes the right brioche. There's a vegetable man just down the street I shop from. I go with a guy to pick baby veggies, walk the fields with him and cut the baby veg. You can't get much more organic than seeing him pick the veg by hand.

Why do you think Americans might want to eat at 1837 when visiting Dublin?

It gives you a chance to try Guinness-inspired pairings you're not going to find anywhere else. You get history about Guinness, finding out why Foreign Extra Stout goes with seafood and why draught goes with stew. Everything's cooked to order and fresh. Plus we've an open kitchen; we're not hiding anything. We have terrific views from the window tables that look down into the brewery and the city.


I wondered how good a restaurant within a beer museum could be but was very impressed. I tried Disraeli's classic pairing of oysters and Guinness. The briny oysters were wonderfully offset by the slightly bitter taste of the creamy stout. I loved the seafood chowder, brimming over with fresh shrimp and fish, both smoked and unsmoked. It's served with a great, crusty dark bread containing the brown elixir. The beef and Guinness stew, the mussels, and crab on toast with horseradish cream, were also notable. Chocolate/Guinness mousse brought the meal to a satisfying end. Along the way, I was advised which of the six varieties of Guinness on offer paired best with each dish and was able to try samples of each.

In addition to these dishes, you can also try dishes like Scotch eggs filled with Guinness-infused sausage (and topped with saffron aioli), a peach chutney-topped burger, and chicken wings topped with a sticky Guinness sauce and orange-ginger creme fraiche.