This piece was co-authored by Jay Shooster from NYU School of Law.

In a recent report by the World Health Organization, processed meat comes across as the new villain of public health. Processed meat undeniably increases the risk of cancer according to the report, which cited 800 studies, while red meat raises similar but less definitive concerns. These warnings are only the most recent pieces in decades of research showing the harm of eating animals, including a scientific advisory committee that recommended a reduction in meat consumption this year as part of the US Dietary Guidelines.

But another industry is causing chronic pain, intense emotional anguish, and torturous deaths. The victims of this tragedy are chickens -- over 60 billion a year worldwide -- who face intense confinement; ultra-fast Frankensteinian growth; and, all too often, being boiled alive in scalding hot water. Just this week, for example, an animal advocacy group released damning footage of Tyson Foods workers punching, throwing and ripping the heads off of live chickens at a Mississippi slaughterhouse. Too much meat is unhealthy for humans, but the devastation it causes for chickens is unfathomable. The crisis of animal farming, especially of chickens, has sparked a vibrant social movement that's driven, to paraphrase Nobel laureate Isaac Bashevis Singer, not by our health but by the health of the chickens. 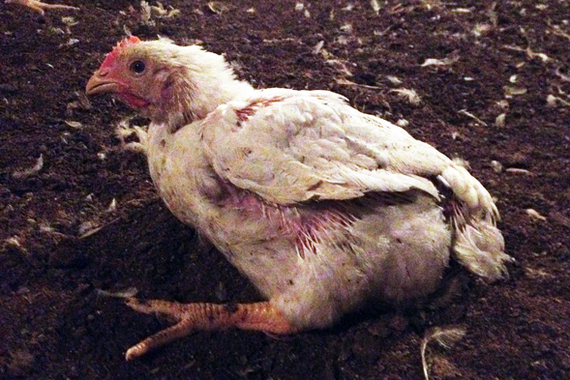 In the US alone, the animal agriculture industry abused and slaughtered about 8.6 billion chickens for meat in 2013, over 3,000 times the number of dogs and cats killed each year in shelters. Nearly all farmed land animals are chickens for a simple reason: It takes hundreds of chickens to supply the number of calories in a single cow.

If these numbers appall you, then consider the severity of the suffering. Scientists have bred these chickens to grow so large and so quickly that they are often completely immobile. John Webster, Emeritus Professor of Animal Husbandry at the University of Bristol, characterized this selective breeding as "the single most severe, systematic example of man's inhumanity to another sentient animal."

These farms are so crowded that even the chickens who are biologically capable of normal movement are physically impeded from doing so. The space per chicken is barely larger than a sheet of paper. The confinement is so intense that they resort to trampling each other to get around, although most sit still, wallowing in pain.

At the slaughterhouse, workers shove their legs into metal shackles and hang them upside down while they are still conscious, sometimes breaking their legs. Then they pass through an electric water bath that immobilizes them, meaning they cannot move but are still conscious, before having their throats slit. Many die from this, but some are still alive when they are dropped into scalding hot water to remove their feathers.

Raising chickens for meat is only one component of this global health crisis. Over 350 million chickens were raised for their eggs in the US in 2013. Of these, most were raised in battery cages so small that the birds cannot spread their wings, with an average space per chicken of less than a sheet of paper. Those not in battery cages still endure much of the same misery, like that male chicks are thrown in the trash to be crushed and suffocate. Once again, selective breeding has made egg-laying hens lay unnaturally large numbers of eggs (and unnaturally large eggs), which causes frequent prolapses, internal bleeding, and ovarian cancer. Perhaps worst of all is their utter depravation of natural behaviors like dustbathing, nesting, and caring for their young. Imagine being separated from your family and locked in a small box for your entire life.

We would never stand for this sort of treatment of dogs or cats. It's tempting to justify this disparate treatment on the grounds that chickens are somehow lower or inferior animals. But scientists have found that chickens feel pain in the same way and to the same degree as mammals, and even outperform dogs on many psychological tests. They have also demonstrated that chickens have complex social and emotional lives, with the ability to take the perspective of other birds and anticipate the future. In one experiment, chickens changed their feeding behavior from watching other birds on TV!

It's not easy taking on a huge industry. Intellectuals and activists noticed the cruelty of chicken farming decades ago, and a mainstream movement is finally gaining steam.

Unfortunately, investigations rarely lead to legal repercussions for executives and businesses that profit the most from this cruelty. That is because most of the violence that chickens are subjected to is not caused by malicious individuals, but by standard industry practices that are perfectly legal. Perversely, most state animal cruelty laws specifically exempt all "customary farming practices" from criminality. Thus, businesses and executives are effectively immunized from animal cruelty liability, as long as they can show that the cruel treatment in question is the norm.

Under the current legal system, it is almost exclusively poor and marginalized workers who face legal consequences for animal cruelty; workers who are traumatized and endangered daily by the standardized legal violence inherent to raising and killing chickens for food. Meanwhile, the powerful interests behind this cruel industry strive to portray these individuals as mere bad apples, instead of acknowledging that desensitization and abuse are inevitable results of the emotional toll that killing for a living imposes on workers. 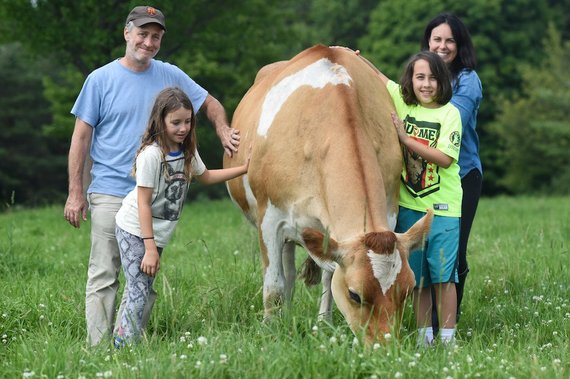 Some organizations like Farm Sanctuary and Animal Place rescue chickens and other farmed animals from these horrific circumstances. My girlfriend (Kelly) and I (Jacy) rescued two chickens from a battery cage facility last year. Seeing them heal has been a tremendous experience. One of them, Snow, was severely crippled when we adopted her and has since regained the use of her legs. Both of them have regained feathers and are now on hormonal implants to relieve them from the suffering and reproductive complications of excessive egg-laying. Emotionally, they have grown from shy and timid birds to becoming more confident and friendly. Snow even likes to sit on Kelly's lap and purr in the evening.

This month, Jon Stewart, former host of the The Daily Show, and Tracey Stewart, advocate and former veterinary technician, announced their founding of an animal sanctuary in New Jersey as part of Farm Sanctuary where they will allow visitors, like school groups, to gain personal connections to these animals and advocate on their behalf. Farmed animals are rescued in a variety of ways, sometimes from farms that are closing down or households that try to take care of someone and realize it's too challenging.

Some groups are taking a different approach. A group called Animal Liberation Victoria, founded by Australian activist Patty Mark, pioneered a tactic known as open rescue where activists nonviolently enter an animal farm, document the always gruesome conditions inside, and rescue one or more suffering animals. In the United States, Direct Action Everywhere, an upstart grassroots network, has used this approach to document the reality of "humane" farming, which still involves many of these horrific cruelties.

In response to the lack of legal protections for chickens, many organizations are working to pass laws and negotiate corporate policies that improve their welfare. In Massachusetts, for example, Citizens for Farm Animal Protection, a grassroots coalition organized by the Humane Society of the United States and others, is working to introduce a ballot initiative for the 2016 election that seeks to ban the use of battery cages in egg production, as well as gestation crates for pigs, and veal stalls for calves. Others are calling for the federal government to use their existing legal authorities to address the complete lack of any national standards for the slaughter of chickens. On the corporate side, groups like The Humane League have successfully campaigned for some of the largest food service providers in the world to commit to phasing out eggs from caged facilities from their supply chains. 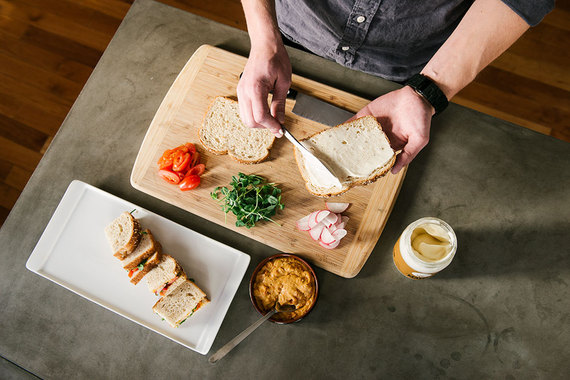 Alternatives and long-term success
To many animal advocates, it seems impossible to have a system of chicken farming without immense cruelty. Producers will always be incentivized to cut corners; massive regulations would need to be in place; huge resources would need to be spent on enforcement; meat prices would rise drastically; and the chickens would still be slaughtered against their will. From this perspective, the animal advocacy movement will eventually need to shift to the replacement of chicken meat and eggs with ethical alternatives.

Fortunately, there are numerous alternatives that are growing in popularity. Beside the classic hearty meatless meals like rice and beans or veggie burgers, we have alternative meats like the Beyond Meat grilled strips. These strips, in fact, were indistinguishable from the chicken-based alternative in a taste test conducted on The Today Show. It's not just chicken meat, either. Multiple groups are developing and selling alternative egg products like Just Mayo, which was recently targeted with legal and other threats by the American Egg Board due to its stunning success. Fortunately, their pushback led the CEO of the American Egg Board to resign.

With this rapidly exploding industry, there is no reason to continue abusing and killing billions of chickens every year. There are many issues with getting our meat from animals; none more apparent and horrific than the suffering of the animals being raised for food. Animal rights is an important issue for many Americans. We have to treat it as the moral crisis it is and take action, whether through activism, getting involved in investigative/rescue work, pushing political change, or taking a strong stand against eating animals with our friends and families.