Meat is about marketing. The cuts of meat served in chain restaurants, and therefore the majority of the country, are based on the high value that our society puts on two contemptible words: tender and lean.

In other contexts, I have no problem with these words. But the living conditions that make meat tender and lean, and the flavor that results is just wrong.

"Once we start to prioritize flavor we start to prioritize animal welfare...when we prioritize tenderness, we're actually prioritizing a system that wants younger animals and less movement and more confinement and antibiotics and cheaper feed - things like that," said James Beard Award-winning author and butcher Adam Danforth at "Meat Matters," an event put on by Chefs Collaborative in late April.

The organization has a solid gold mission: seeking to change the eating habits of America by changing the menus of its restaurants. They provide training and scholarships to restaurateurs with sustainable intentions and get them the knowledge and skills they need to be leaders in their communities. I interviewed the Executive Director Sara Brito for Edible Manhattan in advance of the event and she was really excited about the organization's new plan to reach out to consumers in addition to industry folk. The crowd was equally thrilled to taste dishes from meat luminaries like Rick Bayless, Bill Telepan and Stephen Stryjewski (who announced that his shrine to meat, Cochon is soon coming to Nashville, yee haw!).

All the chefs served sustainable proteins and had their opinions on the most important way to change how America consumes and thinks about meat. But, Danforth, had the clearest and most specific vision of the night and I've been thinking about it ever since. Danforth says that the best way to reach the often competing goals of affordability and sustainability is to eat dual-purpose animals. We should be raising our dairy cows and goats to also be eaten one day. This not only means letting dairy animals graze and move around (as all livestock should) but also encouraging people to consumer older animals. Industry standard for livestock right now is to slaughter at between 12 and 36 months. Danforth is talking about eating animals at least three years old if not older. He argues that the older muscles have better flavor than the younger more "tender" meat. Currently, Dairy animals, once older than three years don't produce well anymore and are usually sold at auction.

"We're dealing with an opportunity to purchase cheaper meat that tends to taste better and we can even support the farmer more than giving them what they would get at an auction," said Danforth. 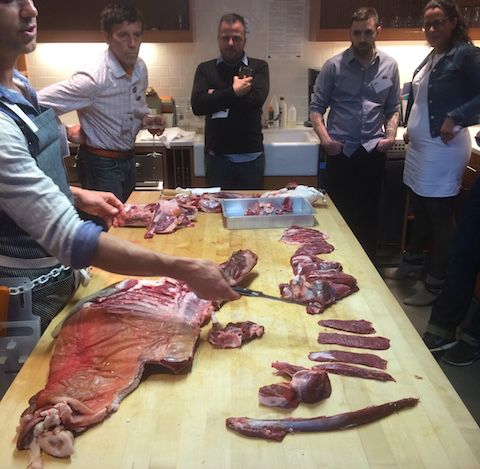 It's such an elegant and simple solution. Use a resource we already have to turn an industry causing massive environmental and spiritual harm on its head.

But as Danforth was explaining all the wonderful cuts he could derive from the four-year-old dairy goat on his table (pictured above), partly due to the animal's age, I kept thinking about that bitch, marketing. What do you call it? We cannot use any of the words for older meat that are already in the lexicon, or the idea will have no cache and could suffer from preexisting prejudices.

Live-aged? Mature? Do we come up with a whole new word like mutton or veal? Or do we not mention it at all? Cuts that take some stewing and chewing work would simply be more flavorful than one would expect from a younger animal, so age might not even need be mentioned. But the quicker cooking cuts would warrant a bit of explanation.

"Deliciousness is what sells. The foundation of deliciousness is flavor and when we prioritize flavor we actually have a whole ethical movement that can support that," said Danforth. But the smart way is probably to start with the men and women cooking in restaurants.

When Rick Bayless makes you a taco, you eat it. And when the meat is exquisite, you buy it. Starting in New York, Chicago and San Francisco might be a quick way to gain the hearts and minds of elite diners, but it's unfortunately the slow way to Costco. And that's where a true and lasting shift in our meat consumption will come from. It won't be done until I can pick up a 25 lb. bag of live-aged goat burgers at my local Walmart.

Until then Mindful Meats and Vermont Chevon are two companies to watch and support.

Writer and food industry nerd living in Harlem, NYC fascinated by the forces that shape how we taste, buy and think about food.