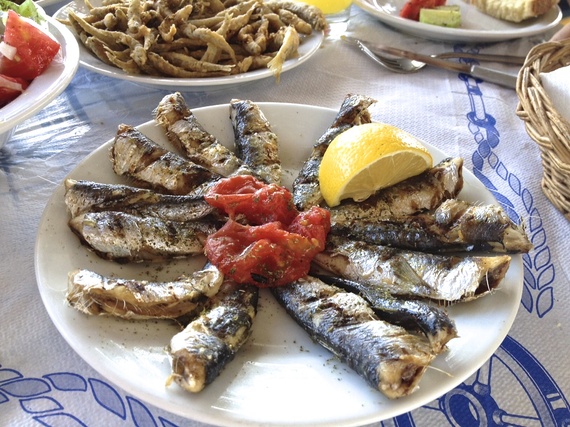 Every country has it own rules and considerations when it comes to food and Greece is no exception. You can eat like the locals and by knowing what to expect, you will experience an authentic Greek eating experience.

1. Don't expect your waiter to be your friend. By this I do not mean that Greek waiters are not friendly, they are, but you will not get the typical American greeting: "Hi my name is so and so and I'll be your server for tonight, can I get you some margaritas to start out?". No you will not have any of that. If they are really busy, they'll probably bring out the basics (bread, forks, knives, menu etc.), and expect you to quickly give them your order when they come back to your table.

2. Know where you are going. In the large cities such as Athens and Thessaloniki, and many of the more popular islands, the range of restaurants is huge. From the simple tavern to the Michelin star restaurant. For high end, hotel and Michelin starred restaurants, the rules of eating out, are the same as in any other large city in Europe, but for the informal tavernas and restaurants you can be expected to eat more like a Greek (see below).

3. What to order. In the typical taverns you are not required to order a main course for each person. You can just order several appetizers. They are generally large enough so you don't want to order too many. Generally a good balance is about 4-5 total for 2 people. So you could order a salad and 1 or 2 dips such as tzatziki or eggplant dip, a serving of fish or seafood a small meat dish such as meatballs and one more vegetable based appetizer. Along with the bread this is a filling meal. These type of appetizers are larger than tapas so they are filling. If you prefer a main course, it can be a plate of lathera (vegetables cooked in olive oil and tomato), pasta or meat or fish. Vegetable dishes will be usually ordered at lunch. Larger fish is usually ordered to be shared among everybody at the table and you pay by the kilo. Meat is usually served with a side of rice, pasta, or potatoes, and therefore you do not need many appetizers.

4. Water is fine to drink in most large cities and islands. Most often than not, once you sit down you will be brought bottled water, you can tell the waiter that you would prefer tap water and they'll bring regular water to your table instead of charging you 3-4 euros for a bottle. On the islands and some other coastal areas the water may not be so great, so there, bottled water is standard.

5. Go to eat at the right time. Sure there are taverns in the touristy places that will serve some sort of lunch at 12 noon, which is coffee time in Greece, but your best bet is to go for lunch between 1:30 and 3 pm. Dinner is also served much later: after 9 pm, later in the summer.

6. Get used to kids. Yes, you will notice kids at the tavern at 11 pm and later especially in the summer. While you may think it is way too late for kids to be up at that hour, in Greece this is the norm. Since dinner is served late, unless parents have someone to babysit their children, they will bring them with to the tavern.

7. Vegetarian? No problem. I find it silly to look for specific vegetarian restaurants or dishes in Greece. The Greek cuisine and the Greek diet was essentially vegetarian. There are dozens of lathera dishes, yes those dishes that are basically vegetables cooked in olive oil in tomato. Ask the waiter what "lathera" they have, many times you can go inside the restaurant and they have platters full of lathera vegetables. In the summer you may see green beans, okra, eggplant, stuffed tomatoes and of course the various pites (spinach pie, cheese pie etc). With the exception of the psistaria (grill-meat taverns) almost any restaurant I've been to has a huge selection of vegetable dishes and appetizers.

8. Tipping is added to the bill, but it is appropriate to leave a small tip at the end of the meal this can be 2-5 euros, depending on the restaurant, you can leave more if you want, but it does not have to be the expected 15-20% you see in the United States.

9. No, Greeks do not eat with their hands. I've seen many posts that say that it is OK to eat with your hands in Greece. Well not really. There are some things that may be eaten with your hands, finger food, which is the case in other countries as well. But generally everything served in a typical Greek restaurant or tavern can be consumed informally with a fork and knife. Sure you may grab a fried potato (french fry) or a small fried fish with your hands or dip your bread in the olive oil of a salad, but usually you pierce the bread with your fork and dip, unless you are eating at home with your family. So no it's not OK to eat with your hands.

10. Non-smoking? Maybe. The smoking situation is not as it should be here in Greece. Supposedly smoking was not permitted indoors. Shop owners felt that they would have a drop in customers and many of them decided not to follow the law. The law was not really enforced and as a result smoking inside is the norm. You may see non-smoking and smoking areas, but they are not physically separated. Luckily in the spring and summer you will be sitting outside, that is good as the smoke is not confined to a closed area.

For authentic Greek recipes and information on the Greek-Mediterranean diet visit OliveTomato.com