In early September a string of unusual whale and dolphin strandings prompted an ad hoc group of whale and dolphin advocates to come together for the express purpose of developing a public international stranding network and database. The database will place information at the fingertips of researchers who study causes of stranding. There is currently a sense of urgency. Events in the oceans are killing animals at an unprecedented rate; the International Dolphin and Whale Stranding Network hopes to help scientists understand why. 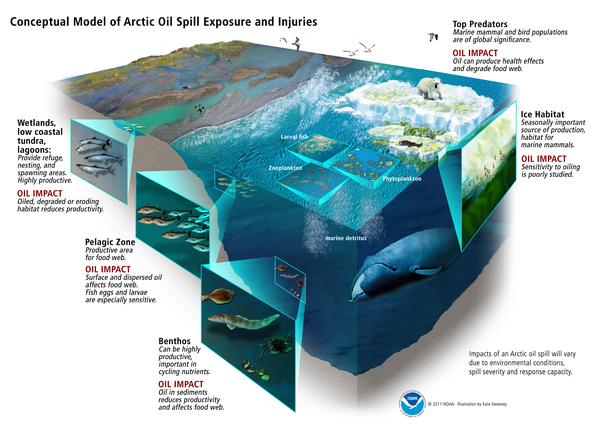 Eating whale to influence a culture

In an attempt to charm the indigenous cultures of Alaska, a Shell oil company executive ate the raw meat of the endangered bowhead whale whenever it was offered to him, even though he didn't care for it. According to PBS, "At company-sponsored meetings with villagers, he passed out raffle tickets, bought trinkets and served food. Though he did not exactly develop a taste for it, he never turned down the local delicacy -- raw whale meat."

"At the same time, Shell officials quietly urged local Eskimo business leaders to help sway the mayor. The company donated $150,000 to Ilisagvik College to expand its Inupiaq language and Inupiat cultural studies program. It financed VHF marine-band radios and satellite phones for whaling crews and covered the costs of some village celebrations." -- The New York Times

This willingness to push their agenda and compromise the intent of protective law is indicative of an entire industry that is taking advantage of loopholes and blurred lines that allows them to wreak havoc on marine life worldwide. It is serious, deadly, and frightening -- both in what is going on under the ocean surface, and the lack of laws and controls to protect whales, dolphins, and other animals. 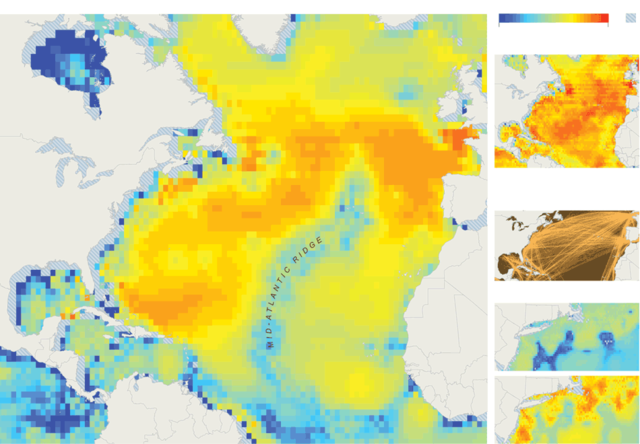 While some nations have strict regulations, others have next to none. In Canada, for example, whales were mentioned just four times in a proposal for arctic drilling, all in the context of not interfering with subsistence whaling. In international waters there are no real controls. U.S. citizens are bound by the Marine Mammal Protection Act wherever they go, but companies get around this by partnering with foreign firms.

And it is not just oil companies that are invading the oceans -- offshore wind farms are being installed in the North Sea, and several companies have developed technology to mine the deep sea for minerals. Some call for massive seafloor equipment that move along grinding up the seabed, then vacuuming up the resulting slurry, other methods involve taking material off the edges of undersea vents.

All of the exploration involves the use of sound levels known to injure or kill marine mammals, turtles, squid, fish, fish embryos, and crabs -- the ships use intense sonar to visualize the ocean bottom, even if seismic surveys are not involved.

And it doesn't stop there. Plans are underway to build massive underwater compressors that will normally pumped to land, and one company, Statoil, had plans to construct an entire underwater factory. 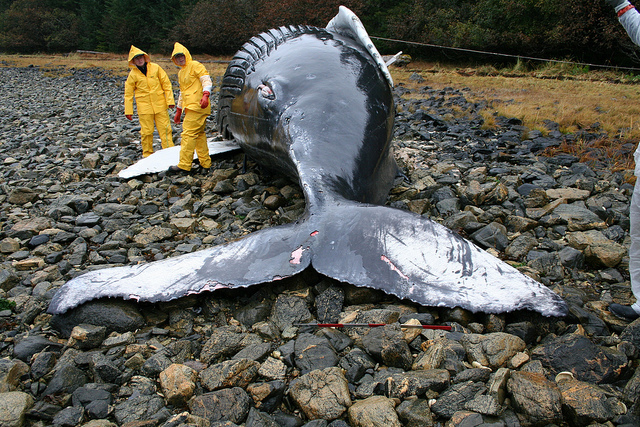 As technology advances, companies repeat seismic surveys over areas considered tapped out or that have had inconclusive results in the past. The scope and intensity of the sound can be greatly magnified by using as many as four ships at once, looping concentrically over areas of thousands of miles.

More than one region is surveyed at the same time by competing companies, leaving little chance that whales and dolphins can find a safe harbor from the sound -- and if they do, there is no guarantee that another survey won't take place there at any time. Once the oil rigs are built they continue to generate noise, as do all the ships that service them.

There are automated underwater vehicles that travel along the sea beds emitting simultaneous side scan sonar, higher frequency seismic sound, and flashing lights to take photos. World's navies use sonar known to kill whales, and engage in practice bombings over stretches of ocean. Fishermen still use explosives to kill fish, affecting all other marine life at the same time.

In at least one place in the North Sea, a grid of around 30 square miles has been laid with cable containing sound receivers, allowing for a relatively often repeated seismic surveys since the ship doesn't have to tow miles of streamers that normally receive the sound.

The push to drill in the arctic is relentless, yet there is no way to guarantee that any spill can be contained, and a spill would further destroy wildlife already pushed to the edge by climate change. The oil industry shows a lack of long term concern by their dodgy methods and willingness to drag old equipment into that unforgiving environment.

A positive note is that some of the major oil companies are investing heavily into researching the effects of their industry on the marine environment, and are looking into alternatives to the seismic airguns as sound sources. This research is slow and frustratingly obtuse, and the attitude seems to be one of wait and see -- it may turn out to be too little too late but it does show that they will respond to public pressure and the dictates of government. The scientists contracted by the companies undergo peer review and are required to publish their findings eventually. (OGP)

After their combined charm offensive and multi-million dollar lobbying, Shell oil managed to overcome objections and to convince officials that they could safely drill in the Arctic, and reassured that they would be able to effectively contain the inevitable oil spills.

It was a disaster. In 2011 a drill barge ran aground near Kodiak Island. In July 2012 one of their drill ships nearly ran ashore and in September they were caught off guard by sea ice and had to stop drilling the day after they started. Tests of their oil containment system were a spectacular failure. In November a second drill ship caught fire. The Environmental Protection Agency cited them repeatedly for violations of emissions affecting air quality.

Shell finally gave up, paid the fines, and cancelled plans to drill this year.

Shell oil's support of the indigenous whalers went beyond providing them with marine band radios; Shell also supplied rescue craft, and flew in fruit and vegetables in the winter. Did they also help spot the whales? Who knows -- but given their willingness to eat an endangered species (allowed under the Marine Mammal Protection Act when served at native ceremonies), it is not hard to imagine that they would be willing to do anything to win the support of the local villages.

"'This is not a surprise, as Shell has had numerous serious problems in getting to and from the Arctic, as well as problems operating in the Arctic,' said Lois N. Epstein, Arctic program director for the Wilderness Society and a member of an Interior Department offshore drilling safety advisory panel.

'Shell's managers have not been straight with the American public, and possibly even with its own investors, on how difficult its Arctic Ocean operations have been this past year,' she said. -- Anchorage Daily News

So far, most of the coastal areas in the U.S. have not opened up to new prospecting and seismic surveys -- but that will change without continued public support to protect our ocean borders.

"The Bureau of Ocean Energy Management, a division of the Department of the Interior, is considering approving seismic airgun testing for a stretch of Atlantic coastal real estate extending from Delaware to around Cocoa, Fla. The proposed offshore area is twice the size of California.

If green-lighted in the coming months, this noisy testing could be conducted underwater repeatedly every 10 seconds over a span of days to weeks.

The blasts -- 100,000 times more intense than the decibels of a jet engine -- could be conducted for eight years. The BOEM has received nine permit requests for seismic airgun surveys for oil and gas exploration." -- Jacksonville.com. 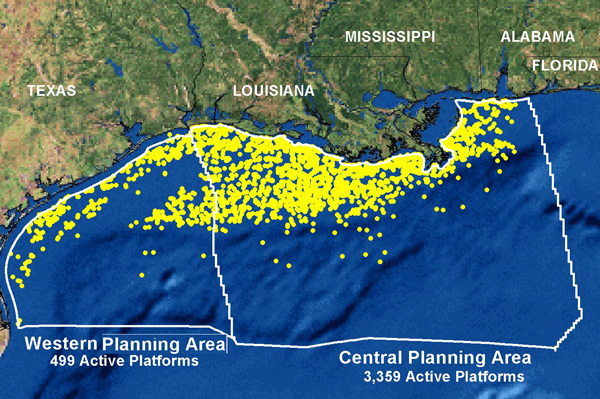 There are around 4000 platforms off the Gulf coast of the U.S., and this is what will happen anywhere the oil industry is allowed unbridled control. (NOAA open source image)

Whales and dolphins also strand due to natural causes, though even those may be compounded by human caused sources. We need to help researchers figure out these strandings and why they occur. This is the end goal for the development of an international stranding network.