Bill Leak's cartoon about Indians trying to munch on solar panels isn't just offensive, it's also just plain wrong. He appears to be utterly clueless with respect to solar energy and its potential to alleviate suffering in the developing world. 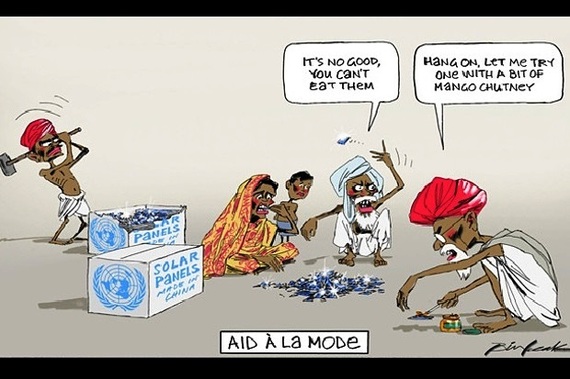 Leak's cartoon--published as a critique of the historic climate change agreement reached in Paris on December 12--seeks to call into question the wisdom of sending solar equipment to a country such as India in which hundreds of millions of people are still struggling to meet basic human needs. After all, hungry souls can't exactly consume and digest solar panels, can they?

Of course not. But herein lies the irony of Leak's cartoon: solar photovoltaic technology can, and in fact, has been used to facilitate food production in some of the poorest, most marginalized parts of the world.

One such example can be found in Benin, West Africa where solar-powered drip irrigation has enabled several hundred women farmers in Kalalé District, a poor, arid region in the northern part of the country, to grow high-value fruits and vegetables year-round, thus overcoming their historical dependency on rain-fed agriculture.

This project, implemented by the Solar Electric Light Fund (SELF), has led to a dramatic improvement in the health and nutrition of some 66,000 people who now have access to highly nutritious produce, including--and especially--during the six-month dry season that had previously condemned the people of Kalalé to prolonged periods of hunger and malnutrition. 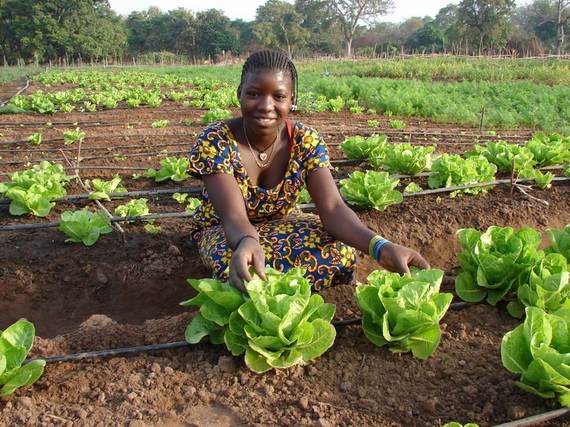 This "Solar Market Garden" initiative in Benin, driven and championed by women, has had such a positive impact on the local communities in Kalalé that it was selected as one of the winners of this year's UNFCCC-sponsored Momentum for Change Lighthouse Activity Awards, presented at the COP21 meeting in Paris, as an example of what can be done to both combat climate change and empower women.

That's what so cool about renewables: they allow us to reduce our carbon emissions while simultaneously addressing the basic needs of communities that have been living without access to modern energy. In the case of Benin, solar power is being used to enhance water and food security, but in other instances, it may be used to improve healthcare and education, promote conservation, or catalyze the development of local enterprise.

Access to clean, renewable energy is not an either/or proposition. It is a mandate for climate change mitigation and adaptation, and it is also a prerequisite for sustainable development. The good news is that with cleantech solutions such as solar photovoltaics, we can safeguard the future of our planetary ecosystem while at the same time improving the lives and livelihoods of the world's poorest citizens.

It turns out that our friends in India can indeed eat the sun...by harnessing solar energy to pump water and grow food on an affordable and sustainable basis.

So Mr. Leak, how do you like them apples? Go ahead and give them a try; I think you may find them quite delicious, especially if you add a bit of mango chutney!