Sure, actress January Jones, reality TV star Kourtney Kardashian, and many other celebrities have done it and loved it.

But a new scientific paper on placentophagy finds no health benefits for women who chow down on their own afterbirth (or pop placenta pills).

“There are a lot of subjective reports from women who perceived benefits, but there hasn’t been any systematic research investigating the benefits or the risk of placenta ingestion,” Dr. Crystal Clark, an assistant professor in psychology and behavioral sciences at Northwestern University and co-author of the paper, said in a written statement. “The studies on mice aren’t translatable into human benefits."

For the review, the researchers analyzed 10 studies on placentophagy published between January 1950 and January 2014, all of which looked at purported health benefits like protecting against postpartum depression or reducing post-delivery pain.

The researchers found no evidence of such benefits -- nor any clear indication of risks.

"While previous research has identified some important areas to direct future studies, the data supporting the benefits of placentophagy for human mothers is limited to anecdotal and self-reported evidence," Sharon Young, a Ph.D. candidate at the University of Nevada, Las Vegas, who has studied placentophagy but was not involved in the new paper, told The Huffington Post in an email, "and the empirical data come from animal studies and less rigorous human studies from the early to mid-1900's." 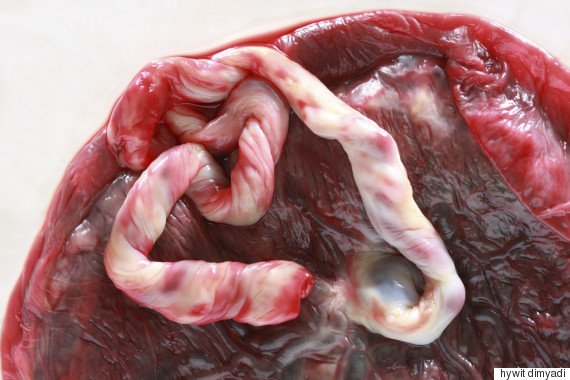 A close look at the placenta.

Though the research didn't turn up any obvious risks to placentophagy, the placenta -- the organ that's attached to the lining of a mother's womb during pregnancy -- is known to keep potential pathogens from reaching the fetus. That suggests the need for additional research.

"Bacteria and elements such as mercury and lead have been identified in the post-term placenta," Clark told CBS News. "So if the theory is that we retain nutrients and hormones such as estrogen and iron that could be beneficial, then the question becomes what harmful substances can also be retained that could harm the mother or the baby if she is breastfeeding."

The researchers concluded that women with post-baby placenta plans should discuss them with their doctors.

The paper was published online in the Archives of Women's Mental Health on June 4, 2015.