Let me make a prediction: You will buy an E-Bike, and like me, you will love having one. 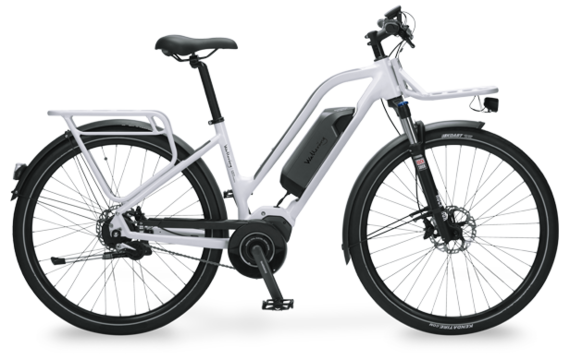 Over the last six months, I've been testing a wide variety of E-bikes and have come to believe strongly that E-bikes are in the future for many of us, specifically those over 50, but in time, for everyone. I've tested bikes from brands you know such as Trek, Specialized and Raleigh, and ones you haven't such as Swedish Ebike company Wallerang (which turned out to be my favorite but more on that later).

An E-bike is a two-wheeled bicycle-like personal transport device that has a motor that is powered in part by a rechargeable battery. In some cases pedaling the bike engages the battery (pedal assist bikes) or even recharges it (although that is not always the case). Others have a throttle. Either way, a motor is engaged that helps power the bike faster, or makes hills or upwards grades easier. In cases where you might have dismounted and walked the bike up a hill, you can now cruise; where others passed you, you can now pass them.

Your friends may think of an Ebike as cheating or tell you that if you are not pedaling all the time, what's the point. They do not get it: An Ebike allows you to bike more often, in more places -- and for those who rately bike at all, it creates a compelling, easy reason to do so.

With an Ebike suddenly you can take rides and bike trips that seemed daunting; or work commutes that you feared would make you sweaty are suddenly manageable. It also gives a psychological boost - it increases when you might ride and how often and opens up a world of biking to those who thought it too much work. As I said, perfect for aging boomers who want the illusion of youth without the work.

My romance with Ebikes started about six months ago when I came into possession of a first generation Ebike by A2B. It has a throttle and goes up to 20mph. The battery is built into the stem and charges in a few hours. However, the bike is very heavy and clunky, closer to a moped than a bicycle. Still I have used it with great pleasure around Santa Monica and it is fun to run errands with. It also provided a great introduction to Ebikes and gave me a sense that what I was looking for did not need to be faster, but it needed to be lighter and look more like a bicycle. Also I was looking for it to maintain the same strength going up hills as did my A2B which, despite its weight, is quite powerful.

In California, where I live, Ebikes have become so popular that the legislature recently passed regulations defining motorized bicycles by class, according to speed and other features. Class 3 Ebikes go over 20 mph and are not permitted on ocean bicycle paths; class 2 ebikes (20 mph and under) are treated like regular bikes.

This is just one indication that the Ebike market has exploded. For further proof, a few weekends ago I attended the Santa Monica E-Bike Expo held at the Santa Monica Pier beach parking lot where I was able to inspect and try more than a dozen different brands of E-bike. 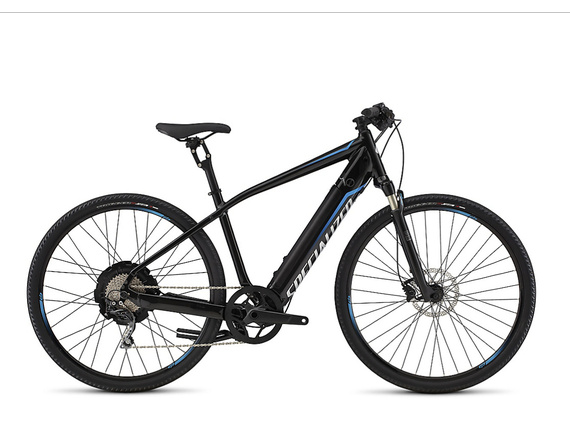 Traditional bike brands such as Raleigh, Trek and Specialized (Specialized calls theirs "Turbo Bikes) have all introduced their own branded Ebikes. In addition there are many other specialized, American and European brands dedicated to Ebikes including Stromer, Tempo, Bulls, Gazelle, Kalkhoff, Riese and Mueller, Wallerang and Yuba. Each has its own distinctive positive attributes - as well as drawbacks. Which model is best for you, is a matter of how (and where) you will most use the bike (on trails, on city streets, etc..) as well as price, features (do you need it to haul cargo or kids) and some are distinguished by style.

There are those who will argue the virtues of whether the ebike is rear wheel powered hub or front and whether the chain is encased or not; how many gears and how you shift them, and the location of the battery. Is it a mountain bike, a road bike, for commuting or off road. For some it is purely an esthetic question of what looks the best. However, to me, what matters most is how you feel riding the bike.

As a caveat, I will note that there are many crowdfunded ebikes on Indiegogo and Kickstarter, most of which are priced at substantial less than the models I tested. Some of them require you to assemble them, and servicing them is more of a promise than a guarantee. As a result, my own survey is limited to the brands below all of which have US distribution and are serviced by the stores that sell them and/or their U.S. distributor or manufacturer.

Let me start with my favorite, Wallerang.

Wallerang is a Swedish bike company from Gothenburg, Sweden. They like to call themselves a marriage of Scandinavian design and Japanese technology. They've set up U.S. headquarters in Santa Cruz, CA. The bikes are all purpose commuter bikes with a aluminum frame, a Shimano mid-step electronic gear shift (with an automatic setting). The frame is non-suspension but they do have models with front shocks. They are also built with a modular system allowing for a variety of cargo carrying choices front and back. But all of that is just justification for the fact that from the moment I rode their M.02X Smartbike, it just felt right. What is great is that you just get on and ride and the gear shifting and power assist are all automated. This was the Ebike for me. 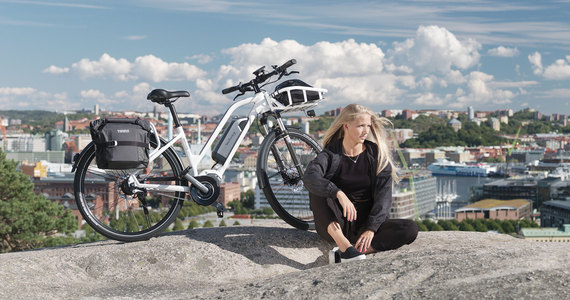 The M.02X has a suspension fork is available as a step-through. This means you sit comfortably on the bike and on whatever terrain you ride. The power when climbing is strong. I liked the silent drive unit and the shifting with three easy to click buttons (and the fully automatic option) make riding simple. There is cycle computer that comes standard with gear, range and battery indication. From the moment I sat on the Wallerang I felt not just comfortable but like I wanted to go somewhere on this bike. The price, (around $3600) is steep. But if that is within your budget, I can say that there was no Ebike I liked more, no bike that I would be eager to use as often as possible on as many roads as possible.

My second favorite was Kalkhoff, which boasts its German engineering and its pedigree of having made bicycles for almost 100 years, making all their own components in Germany. They are premium commuter Ebikes with a dozen different styles including features such as electrical gear shifting and combination back pedal and disc brake, bike lock and battery lock. They have pioneered smart displays and Bluetooth enabled navigation. They are well made and have entry level bikes that retail in the US for under $1600 (although of course one covets the higher price models). If I was looking for an entry level Ebike in price, Kalkhoff provides good value.

As for the other Ebikes I tested: Raleigh makes a line of Ebikes that are moderately priced (for Ebikes) which is to say in the $1600-$2600 range. They handle well and produce a strong push when pedaled. However I found the bike somewhat stiff in its handling and not as comfortable as I would have liked. Specialized's Turbo Ebikes are more in the $4500 price and above price range, but they make powerful mountain bikes to take you up hills (a claimed 530 watts of power!) and are attractive and well-made (personally they are more expensive than I'd spend but if money is not an issue I would recommend trying them).

Trek makes commuter bikes that begin around $3000, have a mid-drive motor, and have long range battery and come with Trek's warranty. The Trek was stiffer ride, did the job well but it was more about efficiency than pleasure. I would say Trek is a safe reliable choice, but I wasn't crazy about how the bike felt (again this is highly personal but I felt on the Trek as if my butt would wear out before the ebike did). 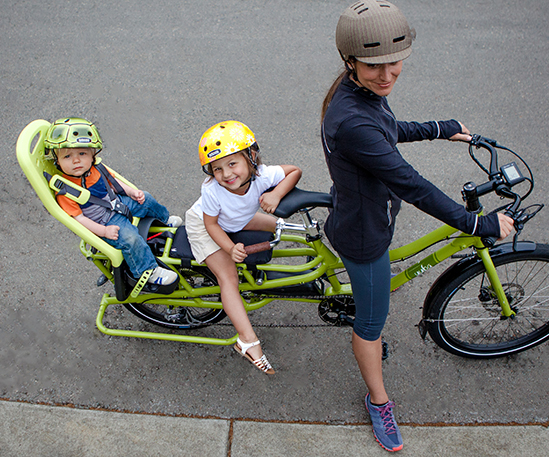 Some of the brands you might not have heard of include Yuba which make cargo Ebikes and ones that can accommodate young kids as second (or even third) passengers. Priced in the $3-4000 range they weigh between 55-70 pounds, but are around six feet in length and really can haul your groceries or kids around town.

Gazelle Ebikes also in the $3-4,000 range, are a Dutch brand that has a retro look (leather seats and handles). Their ebikes are practical and have a spare simple design. The ride is comfortable and the bikes are not too heavy. More stylish are Farragut Ebikes which look like classic bicycles. The ride is somewhat stiff and I didn't find them as comfortable or powerful as other brands but they are attractive.

Stromer is a Swiss ebike that is perhaps the most solid of those I tested. The Stromers are serious ebikes, they feel a little bit heavier (and they are more expensive) but it is fair to say they are the Cadillac of the crowd and the one many Ebike stores recommended to me for all around use. 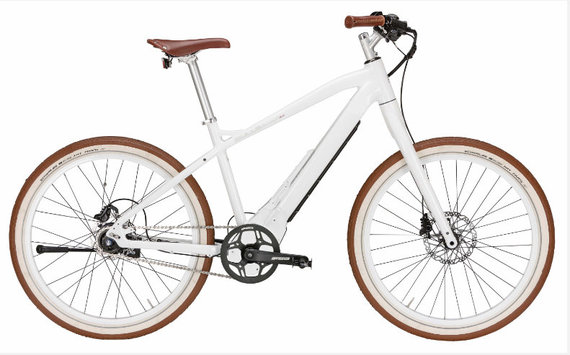 The Germans made a strong showing at the Ebike Expo. Bulls has been in the Ebike market since 2010, mostly in Europe, and has a wide variety of Ebikes from fat-tire off road models to commuter bikes - they are priced at middle and higher range ($3500 and above). The one I rode was an all-purpose model and it handled well. They have a wide range of drive systems and models but I didn't feel they were as intuitive to use as I might have liked.

BMW (yes that BMW) makes an Ebike ($3,430) featuring Bosch motors with a 400 watt battery and shimano disc brakes and a top speed of 25 mph (making it a class 3 bike). The design is clean and there is a ten-gear system (a bit too much for me). There is an onboard computer that makes gear recommendations.

Another German company is Riese and Muller who make more than a dozen models (including folding bikes, some with multiple batteries allowing for an extended range, (also with Bosch motors) as well as cargo ebikes that carry their cargo in front. Their bikes have a distinctive look and appear well engineered (some look somewhat Rube Goldberg-esque). However, I am not sure about the extent of the US dealership service and support.

At whatever price point you choose, and for whatever best suits your needs there's an Ebike for you. And biking with assist is better than not biking at all! As for me, I know I'm going to upgrade from A2B sooner rather later.

So in closing let me say: Happy Trails and I hope to be passing you soon!