Scientists have traced the beginning of the current Ebola outbreak to a two-year-old boy named Emile Ouamouno, who lived in a small village called Meliandou in Guinea and died Dec. 2013. But how did the toddler get Ebola in the first place?

A small team of anthropologists, veterinarians and ecologists think they may have the answer. In a paper published Tuesday for the journal EMBO Molecular Medicine, lead author Fabian Leendertz of the Robert Koch Institute in Germany hypothesizes that Ouamouno got Ebola from a hollowed out tree where children in his community would often play. That tree, it turned out, was home to a large colony of free-tailed bats, which have survived experimental Ebola infection in previous research. That particular species of bat has also been discussed as a potential source for the virus in past outbreaks. 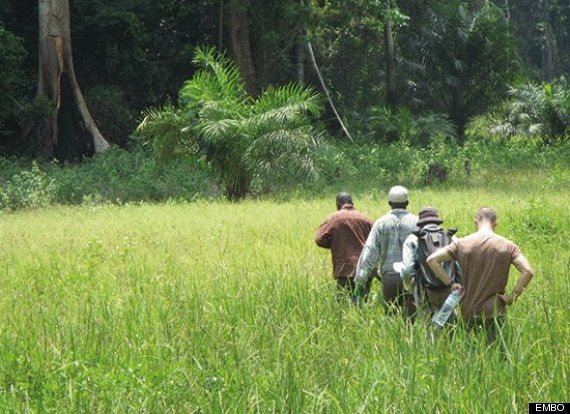 A photo from Leendertz's study.

Ebola is a zoonotic virus, which means that it can pass from animals to humans. In the past, Ebola outbreaks have been traced to bushmeat hunters killing and eating fresh meat from large primates. Leendertz and team ruled out that possibility for two reasons: one, usually the hunters themselves would be the first to come down with Ebola, and two, large primates are increasingly scarce and difficult to catch near Meliandou, according to villagers.

So instead Leendertz turned his attention toward fruit bats, another known Ebola virus carrier. But the fruit bat colonies were relatively far away from Ouamouno's village and besides, fruit bat hunters weren't the first to get sick with Ebola.

Finally, Leendertz focused on insectivorous bats, which children regularly hunted and grilled. He noted a large, hollowed-out tree stump about 55 yards from Ouamouno's home, along a well-trafficked path where women would walk on their way to a small river to do their washing. Villagers told Leendertz that children would often play in the hollowed-out tree, which turned out to be the home of a large colony of insectivorous bats. 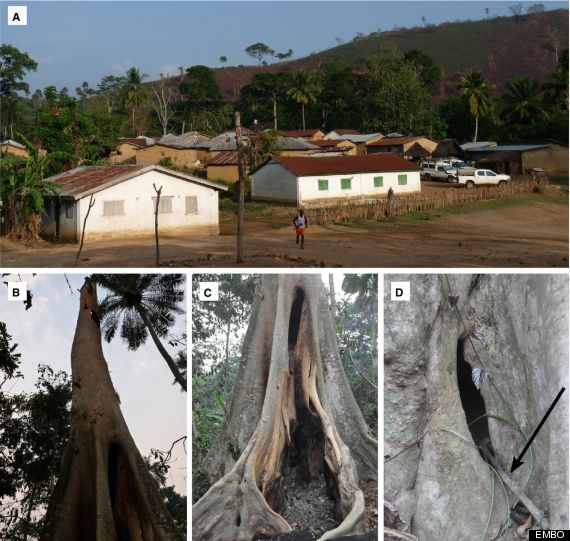 A: The village of Meliandou. B–D: The burnt hollow tree; in (D), the arrow points at a stick, most probably left there by children.


When we arrived, the tree had been mostly burned and only the stump and fallen branches remained (Fig 3C and D). Villagers reported that it burned on March 24, 2014 and that once the tree caught fire, a “rain of bats” started and a large number of bats were collected for consumption (see Materials and Methods). The bats were described as lolibelo, that is, small, smelly bats with a long tail. We found no evidence of additional zoonotic transmission events stemming from the consumption of these bats, but villagers reported disposing of them after a ban on bushmeat consumption was announced the following day.

Children would often capture these bats and play with them, writes Leendertz, and the first cluster of Ebola cases in Meliandou were mostly children and women, he notes, but because he wasn't able to test any of the bats that lived in the tree, there's no way to know for sure if they did indeed transmit Ebola to the little boy.

For now, he writes that his study is enough evidence to begin including insectivorous bats in Ebola outbreak analyses, where before scientists would point the finger at fruit bats or large primates. If Ouamouno is indeed the very first Ebola patient of this current outbreak, extra care needs to be taken to "avoid retribution attacks and stigmatization of the region," Leendertz cautioned. He also wrote that while the public needs to be informed of the risks of handling bats, they also need education about the "crucial ecosystem services" bats provide, which include benefits to humans.

So far in this Ebola outbreak, there have been 19,497 cases and 7,588 deaths, according to the latest figures from the World Health Organization.

To learn more about how the latest Ebola outbreak started, hear from father Etienne Ouamouno about how the virus destroyed his entire family in this video from the New York Times and Frontline (PBS). [Editor's note: there are conflicting reports about how old the toddler was when he contracted the disease. The New York Times reports he was one year old.]


1
Ebola is highly infectious and even being in the same room as someone with the disease can put you at risk
ASSOCIATED PRESS
Not as far as we know. Ebola isn't contagious until symptoms begin, and it spreads through direct contact with the bodily fluids of patients. It is not, from what we know of the science so far, an airborne virus. So contact with the patient's sweat, blood, vomit, feces or semen could cause infection, and the body remains infectious after death. Much of the spread in west Africa has been attributed to the initial distrust of medical staff, leaving many to be treated at home by loved ones, poorly equipped medics catching the disease from patients, and the traditional burial rites involving manually washing of the dead body. From what we know already, you can't catch it from the air, you can't catch it from food, you can't catch it from water.
2
Cancelling all flights from west Africa would stop the spread of Ebola
ASSOCIATED PRESS
This actually has pretty serious implications. British Airways suspended its four-times-weekly flights to Liberia and Sierra Leone until the end of March, the only direct flight to the region from the UK. In practice, anyone can just change planes somewhere else and get to Britain from Europe, north Africa, or the Middle East. And aid agencies say that flight cancellations are hampering efforts to get the disease under control, they rely on commercial flights to get to the infected regions. Liberia's information minister, Lewis Brown, told the Telegraph this week that BA was putting more people in danger. "We need as many airlines coming in to this region as possible, because the cost of bringing in supplies and aid workers is becoming prohibitive," he told the Telegraph. "There just aren't enough seats on the planes. I can understand BA's initial reaction back in August, but they must remember this is a global fight now, not just a west African one, and we can't just be shut out." Christopher Stokes, director of MSF in Brussels, agreed: “Airlines have shut down many flights and the unintended consequence has been to slow and hamper the relief effort, paradoxically increasing the risk of this epidemic spreading across countries in west Africa first, then potentially elsewhere. We have to stop Ebola at source and this means we have to be able to go there.”
3
Temperature screening at airports is an effective way to stop those who have the disease from travelling
ASSOCIATED PRESS
The screening process is pretty porous, especially when individuals want to subvert it. Wake up on the morning of your flight, feel a bit hot, and you definitely don't want to be sent to an isolation booth for days and have to miss your flight. Take an ibuprofen and you can lower your temperature enough to get past the scanners. And if you suspect you have Ebola, you might be desperate to leave, seeing how much better the treatment success has been in western nations. And experts have warned that you cannot expect people to be honest about who they have had contact with. Thomas Eric Duncan, the Ebola victim who died in Texas, told officials he had not been in contact with anyone with the disease, but had in fact visited someone in the late stages of the virus, though he said he believed it was malaria. The extra screening that the US implemented since his death probably wouldn't have singled out Duncan when he arrived from hard-hit Liberia last month, because he had no symptoms while travelling.
4
Border staff should stop people coming in to the country who are at risk
LEON NEAL via Getty Images
They're not doctors, and it's a monumental task to train 23,500 people who work for the UK Border Agency how to correctly diagnose a complex disease, and spot it in the millions of people who come through British transport hubs. Public Health England has provided UK Border Force with advice on the assessment of an unwell patient on entry to UK, but they can't be expected to check everyone.
5
Screening at British airports should be implemented to stop unwell people coming in from affected areas
ASSOCIATED PRESS
As mentioned before, the UK, especially London, is a major transport hub. Unlike the US, most of those coming from west Africa will have crossed through Europe, so infected people could be coming from practically anywhere, not just flights directly from those countries. This would require the UK to screen every returning traveller, as people could return to the UK from an affected country through any port of entry. This would be huge numbers of low risk people, at vast, vast expense.
More:
healthy livingebola outbreakebola 2014 guinea ebola
Newsletter Sign Up
The essential guide to taking care of your mind and body
Subscribe to HuffPost’s wellness email
Successfully Subscribed!
Wellness delivered to your inbox