Amidst United Nations activities in New York this week, global health experts, NGOs and activists are meeting to discuss the ongoing crisis surrounding the outbreak of the Ebola virus in West Africa. British actor and Mandela: Long Walk to Freedom star Idris Elba is lending his voice to the effort in order to shine a spotlight on the work being done to save lives and stop new infections.

"We're going viral to fight the virus," Elba said in a round table discussion hosted by the ONE Campaign that included Carolyn Miles, President of Save the Children; Dr. Chris Elias, President of Global Development Programs at the Bill and Melinda Gates Foundation; and ONE's Co-Founder and Executive Director, Jamie Drummond.

Elba hopes awareness about the disease will spread virally both inside and outside of Africa.

"Second-generation smartphones are everywhere in Africa," Elba says. Even in countries where health care systems are poorly organized, initiatives involving smartphones can be used to disseminate facts and other directives that could help curb misinformation, encourage ill people to seek proper care and and prevent violence against health workers.

Elba says Ebola has hit home for him because his family is originally from Sierra Leone and he has relatives in the region. Sierra Leone is one of the four countries (including Guinea, Liberia and Nigeria) where a total of more than 5,800 cases of Ebola have been reported. This morning, the CDC predicted that the number of new infections could skyrocket into the hundreds of thousands in the next six months.

Elias says that the unprecedented $50 million donation made by the Bill and Melinda Gates Foundation last week to fight Ebola immediately mobilized funds for organizations such as WHO, CDC Foundation and UNICEF, which are putting together community and treatment units to test for the virus and isolate and care for the sick.

Miles says Save the Children is working with Ebola Community Units at the village-based level to help care for Ebola patients so that people who would not normally have sought testing or treatment could receive care. The outbreak disproportionately affects women, who are traditional caregivers.

Drummond says ONE is advocating for responsible governance and better use of countries' natural resources in order to fight the root causes of poverty and strengthen infrastructure and health systems.

What can you do to help? Stay informed. Support the work of organizations that are working on the ground in Africa to fight the disease. And use your voice to speak out against poor governance and corruption. 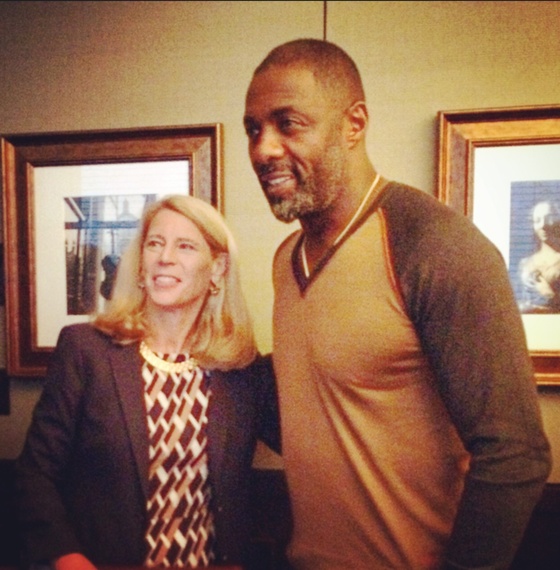 Carolyn Miles and Idris Elba. Photo by Jeri Curry. Courtesy of Save the Children.