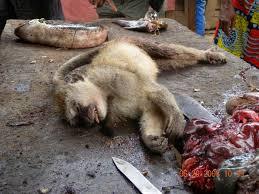 With the largest Ebola epidemic ever recorded raging across West Africa and as two Americans who were infected in Liberia have entered the U.S. for treatment, the question has been raised: will Ebola happen in the U.S?

Actually, an Ebola outbreak has happened in the U.S. before -- not just once, but at least three times.

In 1989, Ebola entered into the U.S. through infected monkeys, which were shipped from the Philippines for experimentation. At the time, Hazleton Laboratories (now Covance, Inc.) owned a facility in Reston, Virginia. After one shipment, monkeys were falling rapidly ill and dying. The Reston facility sent monkey tissue samples to the United States Medical Research Institute of Infectious Diseases where Ebola was definitively diagnosed.

This first-ever known case of Ebola in the U.S. caused a panic within the public health community. A biocontainment team swept in, captured one monkey who had escaped, killed the remaining monkeys, decontaminated the building and closed down the facility.

All of this happened while my family and neighbors slept unsuspectingly not two miles from the facility.

It was not until the book The Hot Zone publicized these events years later that my community even knew how close we were to this dangerous virus. I remember visiting the site with my brothers and sisters after reading The Hot Zone, but all that remained was an eerie abandoned building with no identifying signs.

We were extremely lucky. While several lab workers were infected with this new Ebola strain, now known as Ebola Reston, none fell ill. And we continue to be lucky. Somehow, Hazleton Labs managed to ship infected monkeys into Virginia, Pennsylvania and Texas on at least three additional occasions between 1989 and 1996. Today, laboratories continue to routinely import monkeys from Southeast Asia into the U.S. for biomedical experimentation.

Although it's too late to prevent the current epidemic in West Africa, perhaps we can prevent another one if we take a moment to look at how Ebola and many other infectious diseases arrive on our doorstep in the first place: through the trade in animals.

The Ebola virus is spread by infected blood and other bodily fluids. It is normally transmitted to humans by the hunting, butchering and eating of animals like fruit bats, monkeys, chimpanzees and pigs caught from the African "bush" (or, as we have seen, through contact with infected monkeys in labs). While this bushmeat trade was once primarily done for subsistence, wealthier urban populations have now created a strong demand for "exotic" meat. Bushmeat is also smuggled into U.S. markets.

As humans invade deeper into forests and jungles to seize animals for the trade, we risk exposure to rarely encountered animals that may carry infectious agents that are entirely new to humans. If the situation is right (or wrong, depending on how we look at it), those pathogens can pass into the human population and spread like wildfire. HIV stands as one example. Before 1981, scientists never knew such a virus existed. But we now suspect that it was the bushmeat trade that led to the first human infection.

The bushmeat trade is just one aspect of a much larger problem, though. In the past few decades, there has been an unprecedented surge in emerging infectious diseases such as AIDS, Severe Acute Respiratory Syndrome (SARS), Middle East Respiratory Syndrome (MERS) and swine and bird flus. Since 1980, more than 35 new infectious diseases have emerged in the human population and 87 pathogens that infect humans have been discovered -- that's an average rate of about three new pathogens each year.

There are many reasons why we are seeing new infectious diseases cropping up at an alarming rate: human population growth, increased global travel and climate change. All of these factors are acknowledged and addressed by our public health agencies. But the root cause is largely ignored and it comes down to this: Our relationship with animals is changing for the worse -- for them and us.

Annually, millions of animals are caught from the wild or bred in captivity and then sold in the wildlife trade. They are sold live or in body parts as exotic pets, entertainment, food, fur, skins and biomedical research subjects. Whether bred in captivity or ripped from natural habitats, animals suffer tremendously as they are passed from one dealer to another, shipped overseas or slaughtered on site in profoundly cruel ways.

Just as humans are more likely to succumb to disease when we are stressed, weakened or wounded, these same factors also depress the immune systems in animals, leaving them extremely vulnerable to catching new infections. As a result, the trade creates very sick animals and ideal conditions for pathogens to multiply.

SARS, which caused a near pandemic, had its start in the wildlife trade in the Guangdong Province in China. At some point in the wildlife supply chain, fruit bats carrying SARS were brought into contact with other stressed and susceptible animals, such as civet cats, in whom the virus multiplied. SARS passed from animal to animal and, ultimately, to humans. A Monkeypox outbreak occurred in the Midwest in 2003 after a shipment of infected Gambian rats were sold in pet stores.

Three-fourths of human infectious diseases come from animals. But it's not the animals' fault. If we want to prevent these diseases and save millions of people from untold suffering we have to face the inevitable and uncomfortable truth: the real culprit is how we choose to relate with and treat animals.