James Faulk has covered the exterior of his apartment with alarmist signage, caution tape and hazardous waste bins. But his Texas residence isn't a dangerous place to be -- it's an Ebola-themed home decorated for Halloween.

Even though he's hoping to use his holiday creation to help fight the outbreak, some people aren't buying in to his idea of festive philanthropy.

After Faulk decorated his University Park home with the items, his neighbors asked him to take down the decor, which they found to be in poor taste, Faulk told KGNS News in Laredo. But instead of complying, Faulk said his neighbors just don't appreciate his sense of humor.

"Ebola is scary, and it scared me and it scared everybody," Faulk told KGNS News. "We're making light of it, but in the end, I hope everybody's going to get a laugh out of it and have a good day." 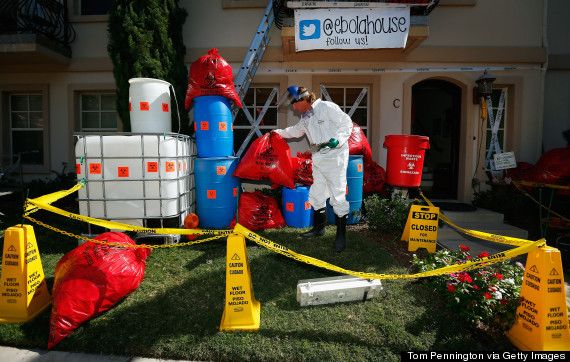 Faulk contends his work is well-intentioned. He set up a fundraising page for Doctors Without Borders, an international organization fighting Ebola in West Africa, to raise money to contain the epidemic. As of Tuesday evening, the page had raised $160 of its $100,000 goal for the global health organization.

Faulk also launched a Twitter account to get the word out on his Ebola-themed decorations and fundraiser. 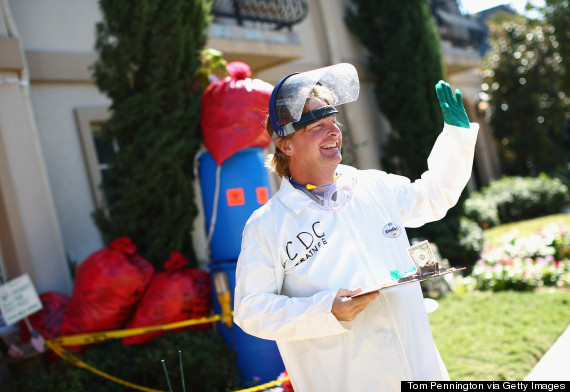 But so far, his efforts haven't been well-received. Doctors Without Borders refused to accept any funds from him, according to WFAA News out of Dallas-Fort Worth.

Texas Health Presbyterian Hospital also refused any donations from Faulk, according to WFAA.

"That kind of let the air out of my sails," he told the outlet. "We didn't get into it to make corporate America happy, that's kind of how they're treating us.”

On Oct. 25, the World Health Organization (WHO) reported that 10,141 people have contracted Ebola and 4,922 have died from the disease in the affected countries of Guinea, Liberia, Mali, Sierra Leone, Spain, the U.S., Nigeria and Senegal.