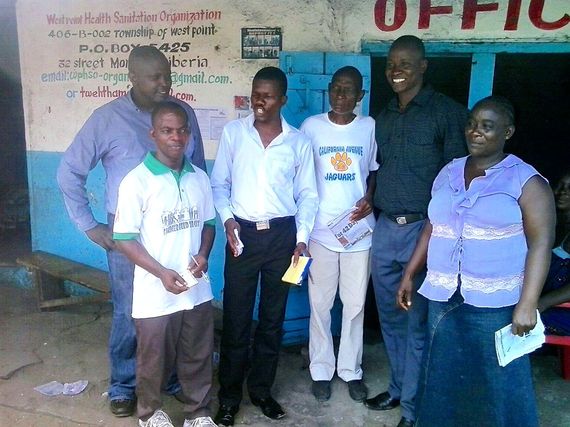 In May, I moved to Liberia -- a country with which I have close personal ties and with which I became deeply acquainted while researching its history for my Master's thesis -- for a job with the Accountability Lab. I was highly excited. I never imagined the devastating extent to which I would witness firsthand how Liberia's difficult past shapes the numerous challenges it continues to confront in the present.

The Ebola outbreak in Liberia and neighboring Sierra Leone and Guinea had garnered modest international attention since March, but for the large class of expatriate aid workers that I was joining -- and Liberian society as a whole -- life continued as normal. The vague threat of Ebola, despite dire warnings from medical charities, seemed too distant to be a real threat.

My very first working day in Liberia was spent in West Point, one of the poorest communities in a very poor country. Housing roughly 75,000 individuals, it lacks everything from a high school to basic sanitation facilities -- and has just one small police station and courtroom. Sandwiched behind Monrovia's busy Waterside Market, West Point lies below the shell of one of Monrovia's few tall buildings, the decrepit relic of what was once the luxurious Ducor Hotel.

My introduction to West Point saw me sitting on a small cement block, sweating profusely as I met with the dedicated members of a team of community mediators supported by the Accountability Lab. (You can vote for this project in a justice innovation competition here until September 17th.) I was overwhelmed by the heat, the noise of countless motorcycles zooming by, and the frenetic amount of petty trading taking place just outside the door. In the following months, I would visit the community several times, discussing ways to best help West Pointers access justice. My most recent visit was in late July, just days before the government imposed a national state of emergency due to a rapid rise in Ebola cases and only weeks before more drastic measures were implemented that specifically targeted West Point. I will not soon forget the vehicle blasting Ebola sensitization messages along West Point's lone paved road as I departed the community during my latest visit.

On August 16th, a treatment center for those infected with the Ebola virus in West Point was looted and patients fled in panic. Days later, the government imposed a quarantine on the entire community. Lasting over a week, it proved disastrous, with residents protesting against the government. One youth, originally described by the government as having injured himself while attempting to cross the barbed wire barricade during a protest, was fatally wounded. It was later revealed that he was shot by security officials and was allegedly an innocent bystander to the protest, merely looking for food.

Almost unanimously, public health officials are predicting that the Ebola crisis will get worse before it is contained. Liberia was wracked by civil war from 1989-2003. It demonstrated sustained economic growth in recent years and was just months away from legislative elections that would have played a significant role in consolidating the country's emerging democracy. Now it will have to find a way to channel the energy and determination needed to rebuild a war-torn nation into battling the world's deadliest outbreak of a highly lethal and little researched virus. I look forward to returning to Liberia to support that fight and the work of the Accountability Lab's partners in West Point.