The worst outbreak of Ebola virus in history -- happening now in West Africa -- has claimed more than 700 lives, according to the latest count from the World Health Organization. The deaths occurred in Sierra Leone, Liberia, Guinea and Nigeria.

"This outbreak is moving faster than our efforts to control it," Margaret Chan, chief of the World Health Organization, said at a meeting, as reported by Reuters.

The Zaire strain of the Ebola virus that's involved in the current outbreak has had a fatality rate in the past of up to 90 percent. However, the fatality rate of the current outbreak is lower. That's because "90 percent is when you receive absolutely no medical care,"said Dr. Nahid Bhadelia, M.D., the associate hospital epidemiologist at Boston Medical Center and director of Infection Control at Boston University's National Emerging Infectious Disease Laboratories.

"Right now you're seeing with supportive care, there's a 60 percent mortality in the field," she told HuffPost.

But how exactly does the virus work to provoke such extreme symptoms -- Ebola is notorious for causing, in some cases, bleeding from the eyes and ears -- and cause death? Bhadelia explained why the body has such a hard time fighting off the deadly virus:

HOW DOES EBOLA ENTER THE BODY IN THE FIRST PLACE?

Ebola is not known to infect people through the air -- you must come into contact with the virus somehow in order to be at risk for infection, Bhadelia said. It's transmitted through exposure to an animal that carries the virus (such as a bat or primate), through exposure to the bodily fluids of a human who is infected and symptomatic, and through exposure to items that have been contaminated with the virus. People who are "providing care for a household member ... when they're cleaning up vomit or diarrhea, they come into contact [with the virus], and the way it's transmitted is there's virus in the fluids," she said. "That virus gets into your own body through the nose, mouth and such."

Ebola can also survive outside the host for a significant period of time -- as long as a couple of days -- at room temperature. "That's why infection control is such a huge part of this," Bhadelia said. "If you have sterilization of equipment, if you have availability of disinfectant, things like IVs ... and if you're able to clean all those environments and isolate patients effectively, the outbreak would never take a foothold." This is why places with good infection control and medical infrastructure face absolutely no risk for outbreaks from this pathogen, she added.

WHAT HAPPENS IN THE BODY ONCE INFECTION OCCURS?

Once the Ebola virus makes its way into the body, it gets in the body's cells and replicates itself. "Then it comes bursting out of our cells and produces this protein that wreaks havoc," Bhadelia explained. The protein is called ebolavirus glycoprotein, and attaches to the cells on the inside of the blood vessels. This increases permeability of the blood vessels -- leading to blood leaking out of the vessels. "The virus causes derangement in the body's ability to coagulate and thicken the blood," she said. Even people who don't show hemorrhagic symptoms will experience this leaking of blood from the vessels -- which can eventually lead to shock and, ultimately, death.

The Ebola virus is also a master of evading the body's natural defenses: It blocks the signaling to cells called neutrophils, which are white blood cells that are in charge of raising the alarm for the immune system to come and attack. In fact, Ebola will infect immune cells and travel in those cells to other parts of the body -- including the liver, kidney, spleen and brain.

Each time one of the cells is infected with the Ebola virus and bursts, spilling out its contents, the damage and presence of the virus particles activates molecules called cytokines. In a healthy body, these cytokines are responsible for provoking an inflammatory response so that the body knows it's being attacked. But in the case of an Ebola patient, "it's such an overwhelming release [of cytokines], that's what's causing the flu-like symptoms" that are the first sign of Ebola, Bhadelia said.

Ebola generally starts with flu-like symptoms. Though it's known for the extreme hemorrhagic symptoms -- the bleeding out of the eyes, etc. -- not everyone will experience these. "In fact, only 20 percent of people will have [these extreme symptoms]" Bhadelia said. "Some people may succumb to the illness before it gets to that point, some may have minor bleeding, some may just have bleeding of the gums, or bruising." 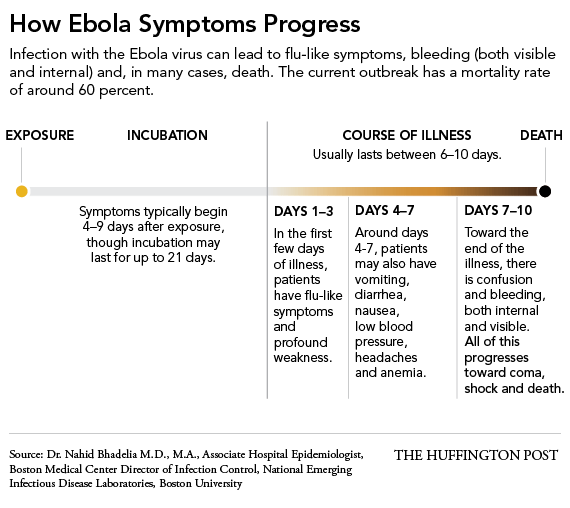 The flu-like symptoms typically occur in the first stages of the illness, before the person gets sicker and starts to experience more severe symptoms such as vomiting, diarrhea and low blood pressure. The extreme bleeding occurs toward the end of the illness. People who die from infection with Ebola virus usually end up dying from multi-organ failure and shock. "The shock is from the bleeding -- now you're bleeding in different parts of your body, and the blood is leaking out of your blood vessels," Bhadelia explained. "Even if [you don't have] the hemorrhagic features, you're still leaking blood."

HOW IS IT THAT SOME PEOPLE HAVE SURVIVED THE DEADLY INFECTION?

It largely has to do with two factors. The first is the person's health in general -- his or her immune system and ability to bounce back from a viral infection. The second is the type of exposure he or she got. Recovery may be more likely if it wasn't a severe exposure -- meaning, perhaps they were exposed to someone who was only early on in the illness, and the amount of virus in the bodily fluids was not yet that high, Bhadelia said.

In addition, what is known about Ebola is that it requires a known marker that aids in bringing the virus from the surface of the cells into the cells. Researchers have found in a laboratory setting that some people's cell lines actually lack this marker, or it may be mutated somehow, so that the Ebola can't get into the cells. However, Ebola research is still very much in its infancy, and knowledge about how the virus behaves is still evolving, Bhadelia said.

Still, findings like these do pave the way for potential treatments. Right now, she said, research is being done to develop treatments that work in several different ways. One of the ways is to block the virus from replicating itself once it's inside the cell. "It basically provides a full stop and doesn't let the virus copy its genetic material over and over again to create the new viruses," Bhadelia said. Another way is to help the body's immune system create an effective response to Ebola by exposing the immune system to an attenuated version of the virus. That way, "it can create an effective response so when the real virus comes around, the immune system doesn't get evaded the way it does regularly." And yet another way is to actually create antibodies specifically against the virus, so "you're giving the immune system a boost from the outside," she said.

Clarification: Language has been amended to clarify the location of the marker that brings Ebola virus into cells.