WASHINGTON -- Around 2008, an Ebola outbreak in Africa sparked a renewed push within the U.S. biomedical research community to find a vaccine. A company called Integrated BioTherapeutics Inc. was given a $5.8 million contract from the National Institutes of Health for vaccine research.

Integrated Biotherapeutics, with subcontractor Protein Sciences Corp., began exploring a way to develop proteins associated with Ebola as a means of boosting antibodies. They hoped to introduce benign elements of the virus to the immune system, priming the body to more quickly recognize and attack the disease in the event of actual Ebola exposure. Protein Sciences had done the same work on an influenza vaccine, with good results. Scientists had confidence they could replicate the flu formula for other diseases.

The breakthrough on the Ebola vaccine never happened. Aman said that the contract grew to around $14 million, but wasn’t renewed after four years because the government wanted to use “a slightly different platform.”

Adams offered another reason why the work came up empty: Money.

“In 2008, of course, all that funding disappeared. So we stopped working and closed it away,” said Adams of the vaccine research. “In 2008, we really started to put brakes on the funding of this stuff.”

The role that money plays in finding vaccines has come under sharp dispute in recent days after the NIH director, Dr. Francis Collins, told The Huffington Post that the country "probably would have had a vaccine in time" for the current Ebola epidemic if not for a “10-year-slide in research support.”

Democrats latched onto the comments as affirmation that slashing biomedical research funding has left the country vulnerable. Republicans responded by arguing that the size of the NIH budget is not the problem -- it's how the budget is spent.

The real issue is far more complex, as shown by the efforts of Integrated BioTherapeutics and Protein Sciences to find a vaccine. Even if NIH provided unlimited funding, it wouldn’t necessarily guarantee a vaccine. Science is an inherently unpredictable proposition, and the process of discovering and producing a drug for market is arduous. As Sarah Kliff of Vox pointed out, “from the lab to the pharmacy, a typical drug takes about 12 years to build.”

For Aman, funding wasn’t necessarily the hurdle. He had a government contract until 2012, but couldn’t manage to produce a vaccine before it ran out.

That said, funding does play an instrumental role in scientific research. The more projects that get money in a given field, the more likely it is that there will be a breakthrough. After Protein Sciences split with Integrated BioTherapeutics, they literally had to freeze their work. A vector that was developed to make the protein was put away with hopes that research could restart when the funds came back. They never did.

Adams, of course, has a financial interest in seeing a more generous NIH. Nevertheless, there are some data points that underscore his point.

The NIH's purchasing power is down 23 percent over the past 10 years. That’s led to a steady dip in the number of projects supported by government grants. In 2013, there were 49,581 grant applications, and 8,310 were funded, a success ratio of 16.8 percent. As recently as 2002, that rate was above 30 percent. 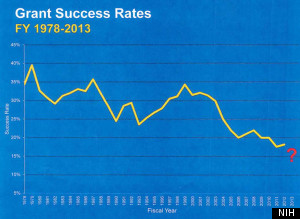 “We've never been this low before,” said Collins. “And for a scientist who's got great ideas and a vision, to get rejected over and over again, people are starting to give up. It's so unfortunate when you see how we, America, who is supposed to be the lead visionary when it comes to science and technology, we are, of all the countries in the world, the one that's doing the most damage to our scientific enterprise.”

Critics of Collins have scoffed at his lament. Funding for the NIH, they note, still hovers around $30 billion, which outpaces other countries, even if they are investing a greater percentage of gross domestic product to scientific research. Moreover, if the complaint is that there wasn’t enough money to bolster research for an Ebola vaccine, the main culprit isn’t Congress for its lack of generosity, but NIH officials for spending frivolously, the critics say. 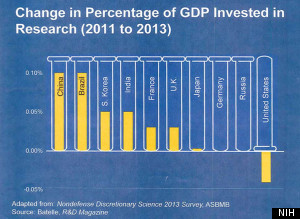 In conservative circles over the past few days, it’s become a sport to find ridiculous-sounding NIH-funded research. The Washington Free Beacon compiled a greatest hits list on Thursday (the total amount of money highlighted as wasteful amounted to about 0.1 percent of the NIH budget). Sen. Rand Paul (R-Ky.) has mocked the NIH while on the campaign trail with fellow Republicans.

These attacks may produce guffaws. But they gloss over the basic structure of the NIH grant process. For starters, it’s difficult, if not impossible, to predict what the big biomedical need will be five years down the road. NIH prioritizes certain subjects. But it also tries to spread resources to many fields.

Second, it’s scientists, not bureaucrats, who are doling out the money. Every year, experts in specific fields volunteer to be on an NIH study section. They sit in a room, review grant proposals, and score them based on scientific merit. Those scores are sent to NIH, which establishes the pay lines for what gets funded and what doesn’t. Sometimes, it’s the odd-sounding project that's judged to be meritorious. Sometimes, that project produces the most promising medical advance.

“One of the biggest issues we face in Congress is the idea that federal research agencies should fund only science with a specific practical purpose,” Barry Toiv, vice president for public affairs at the Association of American Universities, said in an email. “That is not how science works. If this had been the practice ... the list of lost or delayed technologies and medical advances would be staggering. For example, we’ve reduced deaths from heart disease and stroke by more than 60 percent and transformed HIV/AIDS into a manageable illness in good part through the serendipitous results of unrelated research. ... Rather than worrying about what sounds funny or obscure, we need to let the world’s greatest research enterprise do its job.”

All of which leads to another critique of Collins’s remarks, this time from within the science-research community itself. By tying an Ebola vaccine to enhanced funding, the worry goes, Collins set the stage for lawmakers to demand research-specific budgeting.

“Dr. Collins has opened up the NIH budget process to politics in a way I truly wish he had not,” wrote Benjamin Corb, director of public affairs at the American Society for Biochemistry and Molecular Biology. “In a time when dozens of bills are introduced in Congress to fund the disease du jour of a member of Congress, and researchers at other agencies are forced to explain the broader impacts of their research, Dr. Collins is sending a dangerous message that more money equates to more cures.”

Corb’s post concluded with the argument that NIH didn’t have to point to past funding shortfalls in order to make the case for larger future budgets. The emergence of Ebola within U.S. borders had already prompted a push for supplemental appropriations for NIH and the Centers for Disease Control and Prevention. On Thursday, House Minority Leader Nancy Pelosi (D-Calif.), called for hearings on NIH and CDC funding.

On the ground level of the biomedical research community, certainly, the case is being made that money is needed -- now. At Protein Sciences, Adams has restarted Ebola vaccine research at the company’s own expense. He alerted NIH officials, he said, and they agreed to help with testing on primates if he's able to produce a vaccine.

At Integrated BioTherapeutics, meanwhile, Aman said the company is still pursuing an Ebola vaccine, with its own financing. “But we will definitely need additional funds to take it into clinical trial,” he said.