BETHESDA, Md. -- As the federal government frantically works to combat the Ebola outbreak in West Africa, and as it responds to a second diagnosis of the disease at home, one of the country's top health officials says a vaccine likely would have already been discovered were it not for budget cuts.

Dr. Francis Collins, the head of the National Institutes of Health, said that a decade of stagnant spending has "slowed down" research on all items, including vaccinations for infectious diseases. As a result, he said, the international community has been left playing catch-up on a potentially avoidable humanitarian catastrophe.

"NIH has been working on Ebola vaccines since 2001. It's not like we suddenly woke up and thought, 'Oh my gosh, we should have something ready here,'" Collins told The Huffington Post on Friday. "Frankly, if we had not gone through our 10-year slide in research support, we probably would have had a vaccine in time for this that would've gone through clinical trials and would have been ready."

It's not just the production of a vaccine that has been hampered by money shortfalls. Collins also said that some therapeutics to fight Ebola "were on a slower track than would've been ideal, or that would have happened if we had been on a stable research support trajectory."

"We would have been a year or two ahead of where we are, which would have made all the difference," he said.

Speaking from NIH's headquarters in Bethesda, Maryland, the typically upbeat Collins was somber when discussing efforts to control the Ebola epidemic. His days are now spent almost exclusively on the disease. But even after months of painstaking work, a breakthrough doesn't seem on the immediate horizon.

Money, or rather the lack of it, is a big part of the problem. NIH's purchasing power is down 23 percent from what it was a decade ago, and its budget has remained almost static. In fiscal year 2004, the agency's budget was $28.03 billion. In FY 2013, it was $29.31 billion -- barely a change, even before adjusting for inflation. The situation is even more pronounced at the National Institute of Allergy and Infectious Diseases, a subdivision of NIH, where the budget has fallen from $4.30 billion in FY 2004 to $4.25 billion in FY 2013. (Story continues below.) 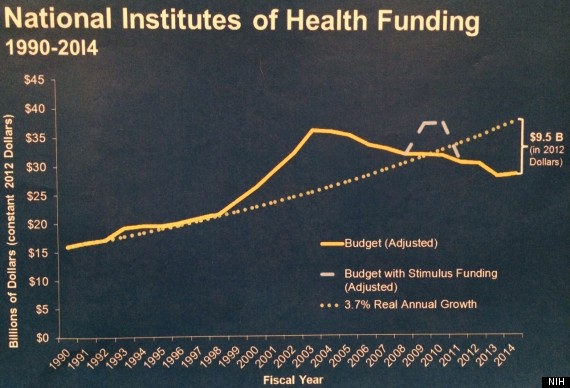 The growing severity of the Ebola crisis in West Africa and the fear of an outbreak in America haven't loosened the purse strings. NIH has not received any additional money. Instead, Collins and others have had to "take dollars that would've gone to something else" -- such as a universal influenza vaccine -- "and redirect them to this."

Collins said he'd like Congress to pass emergency supplemental appropriations to help with the work. But, he added, "nobody seems enthusiastic about that."

Several Democratic lawmakers have in fact introduced legislation that would increase NIH funds to $46.2 billion in 2021. But there is no indication that such a bill will move forward any time soon.

Under the existing budget, NIH officials have rushed to find a breakthrough. Though health officials were already "cutting corners" in an effort to produce an Ebola vaccine, Collins said that a best-case scenario would be for a clinical trial to start in December, and it would take until February or March to know if the drug worked.

"If we wait that long to solve this, we will have basically failed with the more traditional measures of contact-tracing to get this epidemic under control," said Collins.

An Ebola vaccine, in short, would be an insurance policy, worth pursuing if other means fail and for possible future epidemics. Currently, NIH is working on a fifth-generation Ebola vaccine that has had positive results. But the tests are being done on monkeys, not people. To set up a clinical trial for humans takes time and resources, and doubly so in a country whose social and political fabric is as frayed as Liberia's. Even so, limited trials have already begun.

A second vaccine is being designed in Canada, just weeks behind NIH's schedule. But recipients have exhibited fever symptoms, which could prove problematic because elevated temperature is also a symptom of Ebola.

Collins says his "dream" is to set up a trial using those two vaccines and involving 30,000 people. But even with the current heightened demand, he cautioned that such a dream couldn't be rushed.

"Sometimes vaccines not only don't work, they make things worse," Collins told HuffPost. "Look at the HIV step trial, where that vaccine not only did not protect [against] HIV, it increased susceptibility because it did something to the immune system that made it more vulnerable. That could happen here too." (The private sector, it should be noted, hasn't developed an Ebola vaccine for a variety of reasons, primarily financial ones.)

Collins was more bullish about the prospects of developing a therapy, as opposed to a vaccine, because it would be possible to conduct a test trial among people already in treatment units, rather than among the uninfected.

So far, much of the focus has been on an experimental cocktail of three monoclonal antibodies known as ZMapp. But the current stockpile is not nearly great enough. Collins, a touch exasperated, said it would be all but impossible to have significant doses available by the end of the calendar year -- with a lack of funding once again playing a disruptive role.

"Had it not been for other shortages, we might very well by now know that it works and have a large stock of it," he said.

There are other potential therapies. Brincidofovir has been used on an Ebola patient brought to Nebraska and on the late Thomas Eric Duncan, who was diagnosed with the disease after traveling to Dallas from his native Liberia. Unlike ZMapp, there is a large stockpile of Brincidofovir available, and the doses required are small. "So you could imagine you have enough drug now to treat 16,000 people," said Collins. But, again, a clinical trial is needed in Liberia.

With more than 4,000 people having died from Ebola -- the majority of them in West Africa -- the clock is already ticking fast for the biomedical research community. On Sunday morning, it sped up even more as news broke that a second patient in the United States had tested positive for the disease. The patient, a nurse who had treated Duncan, is the first person to contract the disease on U.S. soil. Officials at the Centers for Disease Control and Prevention say they're looking into how it happened. Though the patient, who works at the Texas Health Presbyterian Hospital in Dallas, had been wearing protective gear during her encounters with Duncan, officials indicated that a procedural lapse likely caused the transmission.

Speaking two days before that second diagnosis, Collins urged calm when contemplating the possibility of an outbreak. Ebola is a disease that is highly lethal. But it is also only transmitted through direct contact with bodily fluids or objects contaminated with the virus.

"Certainly there's been a lot of fear [in the] response from people who are probably at essentially zero risk, that this might somehow take over our country, which is really not going to happen," said Collins. "And despite all the assurances ... it still hasn't quite sunk in. There's still the cable news people who are whipping this up, and frankly sometimes using it for political purposes to sort of shoot at the government."

Collins didn't downplay the severity of the disease, noting that its rapid spread in Africa, and the humanitarian disaster it has left in its wake, should rattle people. He also agreed with the comparison made by Tom Frieden, head of the CDC, who recently said the current Ebola crisis is the worst epidemic since the outbreak of AIDS. But, Collins added, perspective was still needed.

"More people will die today of AIDS than have died so far in the entire Ebola epidemic," said Collins. "We've somehow gotten used to that, and it doesn't seem to be so threatening or frightening. Certainly in the United States, another 50,000 people will get infected with HIV this year, because that's been sort of the steady number."

"How many more people will get infected with Ebola this year in the U.S.?" he went on. "I would guess you could count among the fingers of two hands, depending on what contacts of the guy in Dallas actually turned out to get infected."