The ebook market is growing faster as it grows larger.

The International Digital Publishing Forum (IDPF), in an email to members Friday, reported U.S. wholesale ebook sales for the month of January, 2010 rose 261 percent to $31.9 million from the same period a year ago.

To put this in perspective, I created the chart below, which pulls annual wholesale ebook sales data from the Association of American Publishers(AAP). For 2010, I annualized IDPF's January data.

The IDPF and AAP collect the sales data from only 12-15 U.S. trade publishers. This means it dramatically understates what's really happening in ebooks, because thousands of large and small publishers, as well as tens 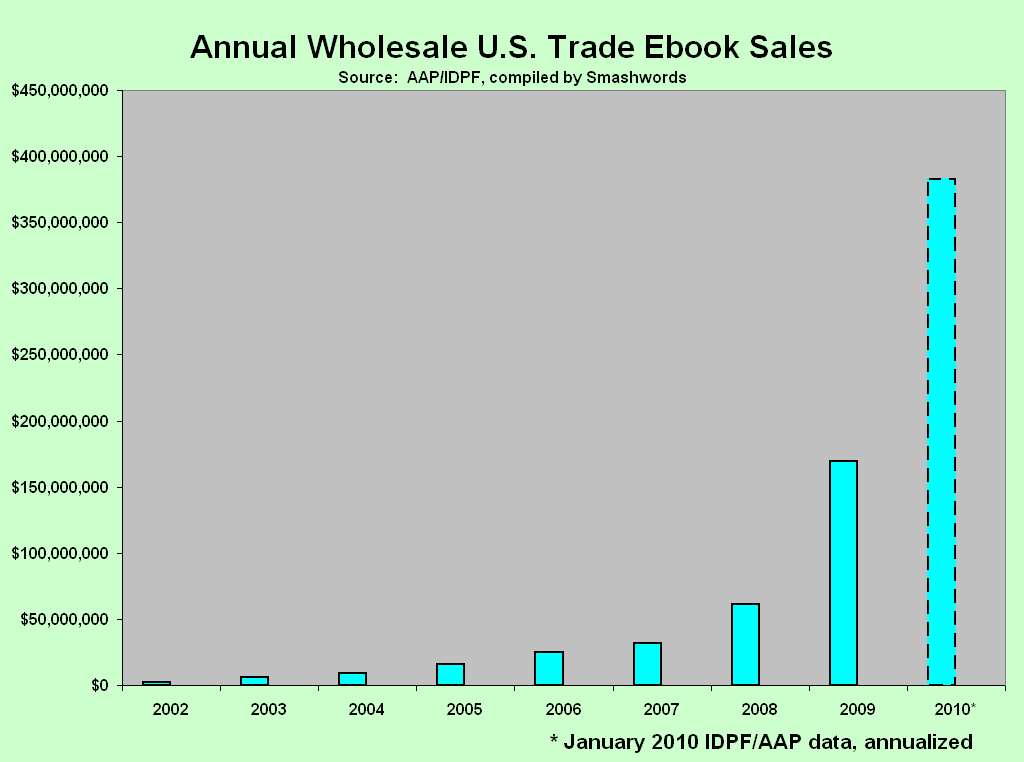 The above omissions don't diminish the validity of the data. As an indicator of direction and momentum, the AAP/IDPF data provides some of the best publicly available trending information.

What you see from my chart is that ebook sales grew nicely between 2002 and 2007, but were really too small to register on the radar screens of most industry watchers. Starting in 2008, however, the growth rate started to accelerate, and then this acceleration continued throughout 2009 and into the first month of 2010.

According to the AAP, in 2009 ebooks accounted for 3.31% of all trade book sales, up from only 1.19% in 2008. Even if sales stay flat from January onward in 2010, we're looking at ebooks accounting for 6-8% of U.S. book sales in 2010. If sales accelerate further, a 10% monthly run rate is likely by the end of this year. These numbers are dramatically higher than most reasonably-minded industry watchers predicted even a few months ago.

The rosy numbers above still dramatically underestimate the impact ebooks are having on the bottom line of authors, publishers and retailers. In January, during Amazon's quarterly earnings conference call, Jeff Bezos announced that for books it sells in both Kindle and print formats, ebooks were then accounting for 60% of unit sales.

What's driving the torrid growth of the U.S. ebook market?

Amazon deserves much of the credit, and is also receiving the most benefit. In January, Rory Maher of TBI Research reported that his publishing industry contacts were telling him Amazon was accounting for 90% of all ebook sales. Other analysts have since confirmed similar estimates.

The upcoming April 3 launch of Apple's iPad, along with more aggressive moves by Google, Barnes & Noble, Sony and scores of other new ebook device makers and indie retailers, will no doubt attempt to diminish Amazon's purported 90% share.

The real story is not how or if these competitors take share from Amazon. It doesn't matter. What matters is that an ever-growing pro-ebook crowd of powerful consumer-facing companies are pulling out all the stops to spread the joy of ebooks to every corner of this book-hungry globe.

Why are consumers going ga ga over ebooks? Back in October, I blogged some of the reasons in my Huffington Post piece, Why Ebooks are Hot and Getting Hotter. I cited several factors, such as the proliferation of exciting new e-reading devices; the pleasures of screen reading; content selection; free ebooks as the gateway drug; lower prices; convenient purchasing; and great selection.

In summary, it's about customer experience. Most people who try ebooks love ebooks.

Lest we think ebook reading is all about pricey jet set devices like the iPad, Kindle, Sony Reader and B&N nook, it's worth considering some telling data that came out of the latest Book Industry Study Group survey. As I reported in my Tools of Change conference wrap-up, BISG found that 47% of all ebook reading is happening not on these new-fangled devices, but on ordinary computer screens.

This story originally appeared on the Smashwords blog.