Europe's central bank just slashed interest rates and launched emergency stimulus measures -- but six years too late, and not enough to counter the austerity that has Europe in a worse mess than the Great Depression.

The European Central Bank surprised markets on Thursday by cutting its target short-term interest rate to basically zero. ECB also plans to buy a bunch of bonds to push longer-term rates lower, too -- an echo of the U.S. Federal Reserve's many rounds of "quantitative easing," used in recent years to goose the economy (or at least the stock market).

Good job, good effort, ECB, except this comes nearly six years after the Fed cut its own rates to zero and launched QE. In other words, the ECB is way behind the game. That's one reason the U.S. recovery, unsatisfying as it has been, looks like the 1990s economic boom compared to the crap hoagie that is Europe's economy.

Europe's current slump is worse than the Great Depression, as Paul Krugman and many others have pointed out. Here's a chart for evidence, via Professor Nicholas Crafts at the University of Warwick: 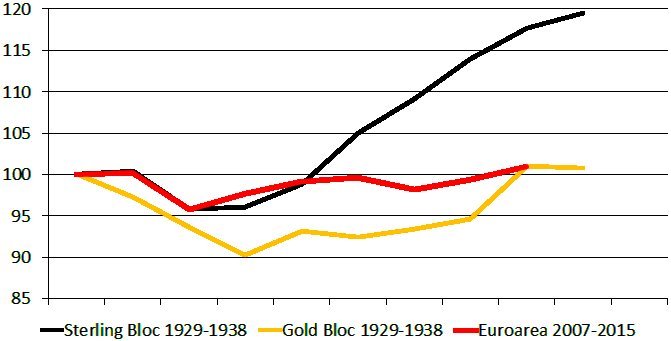 The red line represents Europe's current GDP growth and the forecast for the next year or so. As you can see, it's flatlined. The black line shows the growth of European countries that wisely dumped the gold standard during the Great Depression of the 1920s and '30s. The yellow line shows the countries that stuck with gold for too long. Europe is currently doing just about as well as those miserable countries.

In fact, this chart is about eight months old, and the red line's end should probably be lower than it is. Europe's GDP has relapsed lately, raising fears of a triple-dip recession, as this graph from Trading Economics shows:

U.S. GDP hasn't exactly been gangbusters, but it's at least managed to stay positive (mostly):

Europe's unemployment rate, meanwhile, is 11.5 percent, compared with 6.2 percent for the United States. European inflation is also dangerously low, near zero percent, while U.S. inflation isn't far from the Fed's target of 2 percent.

Low inflation sounds great, unless you consider the case of Japan, or the U.S. in the Great Depression. In those cases, prices kept falling, so people stopped buying stuff because they expected prices to fall -- which they did, which made people continue to not buy stuff. All the while, the economy got worse.

That's the path Europe is on. It's largely the fault of Europe's fiscal policy makers, who have stubbornly refused to spend money to stimulate the economy, aside from a paltry stimulus package that amounted to just 1.5 percent of GDP in 2008. By comparison, the U.S. stimulus plan in 2009, though probably not nearly big enough, was worth more than 5 percent of GDP. Europe has also imposed strict austerity measures on Greece and other countries struggling with high debt loads.

The ECB hasn't helped by waiting too long to act aggressively. And now it's playing catch-up in the middle of a depression.