The ballots were mailed in late January and due back to PricewaterhouseCoopers this past Tuesday for final tabulation. Only two partners of the accounting firm know the results until the seals of each envelope are broken and the winners are announced onstage during the Academy Awards presentation. The Academy's active members are eligible to vote for Oscar winners. Can networking help us predict the contents of the envelopes?

How will we network? Picture a sheet of paper covered with dots. Written beside each is the name of a movie actor or actress and every person who has ever been in a movie is listed somewhere on the page. How large is this sheet of paper? Big -- there would be millions of dots. Now suppose that you draw a line to connect any two dots where the corresponding actors co-starred in a movie together. For instance, a line would connect Daniel Day-Lewis and Sally Field, due to their co-starring in Lincoln. Repeating this for all pairs of actors and actresses creates the Hollywood network.

A small segment of the Hollywood network is shown in the figure below. 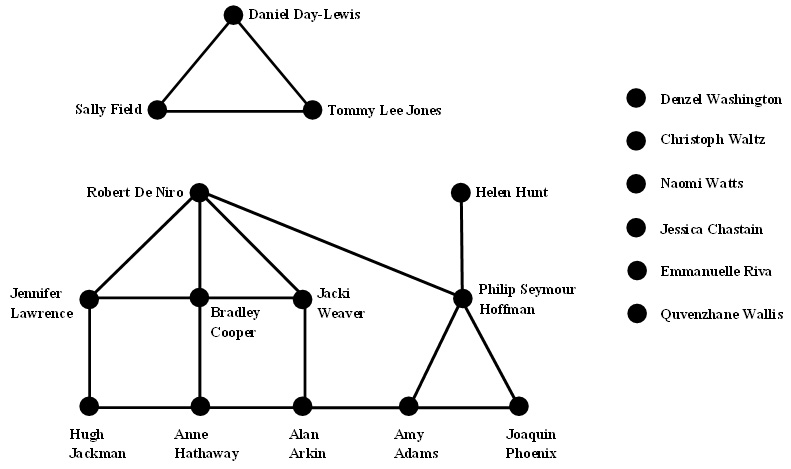 The small network contains all the 2013 Oscar nominees for best lead and supporting actor or actress. (For fun, see if you can name the movies that connect these actors.) Notice that there are some people who are not connected to anyone else. In the full Hollywood network, of course, these folks are connected to lots of others. Denzel Washington, for instance, is connected to over 3,000 other actors. He simply isn't connected to anyone in this small subset.

Is Kevin Bacon the Center of Hollywood?

A number of years ago, several college students noticed that Kevin Bacon had appeared in a large number of movies. They wondered if every actor could be connected to Bacon via movie linkages. This gave birth to a part of pop culture: the Kevin Bacon Game, which involves trying to make these connections by discovering chains of movies. As an example, 2013 Oscar nominee Quvenzhané Wallis can be connected to Bacon in three steps: Quvenzhané was in Beasts of the Southern Wild (2012) with Jay Oliver, who was in The Campaign (2012) with John Lithgow, who was in Footloose (1984) with Kevin Bacon. Such paths are not necessarily unique. For example, Quvenzhané Wallis' Beasts of the Southern Wild co-star Jay Oliver was in The Curious Case of Benjamin Button (2008) with Brad Pitt, who was cast with Bacon in Sleepers (1996).

What is the largest number of steps needed to connect an actor or actress to Kevin Bacon? Looking at our sheet of paper with its millions of dots, this may seem intractable. We need only to turn to an oracle, actually the Oracle of Bacon website. The site suggests that three people in the Hollywood network are 9 steps away from Bacon -- and no one is any farther. Mathematically, we state that Kevin Bacon has an "eccentricity" of 9 in the Hollywood network. If Bacon has the smallest eccentricity of anyone in the network, he is said to be the "center."

Is Kevin Bacon the center of Hollywood? He's definitely not the center, given that there are over 1,000 other people with the same eccentricity. What's even more interesting (and perhaps disappointing to Bacon fans) is that 13 actors have an eccentricity of 8. These actors, which include Martin Sheen, Ben Kingsley and Harvey Keitel, are closer than Bacon to the center of the Hollywood network. While Kevin Bacon may have been central at one point, he isn't now.

And the Winner Is?

Let's form the Oscar network to predict this year's Academy Award winners. This sub-network of the Hollywood network contains only those actors and actresses who have appeared in any movie since 1971 that has been nominated in one of the "Big 5" categories: Best Picture, Best Actor, Best Actress, Best Supporting Actor and Best Supporting Actress. Furthermore, let's say that two of these people will be directly connected in the Oscar network if they appeared together in one of these Oscar nominated movies. This network, while smaller than the Hollywood network, is still huge, with over 20,000 people. In order to focus attention on top-billed actors and actresses and make this more computationally friendly, let's restrict the list of actors and actresses to only those who are listed among the first 20 names in each movie's ordered cast list.

With our data prepared, we need a prediction algorithm. Let's base ours on the assumption that it helps to have connections in Hollywood. More specifically, let's assume that better-connected actors will fare better in PricewaterhouseCoopers' final tally. So, given a list of actors, we'll predict the winner to be the one with lowest eccentricity in the Oscar network.

We've computed the eccentricities and are ready to announce the predicted winners. Among this year's Best Supporting Actor nominees, Robert De Niro has the lowest eccentricity, 4. In all other categories, there were ties, and so we broke the ties by further restricting the actor/actress list to 10 per movie rather than 20. Our eccentric predictions for these categories are Daniel Day-Lewis, Naomi Watts and Sally Field. (Denzel Washington, Philip Seymour Hoffman, Jessica Chastain and Amy Adams were all close seconds.) Now, let the Oscars begin, and let's see how networking in the Hollywood network pays off!