While opponents of immigration reform often portray undocumented immigrants as a potential drag on the economy, some research shows legalizing their status would likely provide an economic boost.

According to an infographic produced by the Financialist, a digital magazine produced by Credit Suisse, the economic gains of immigration reform far outweigh the potential costs. 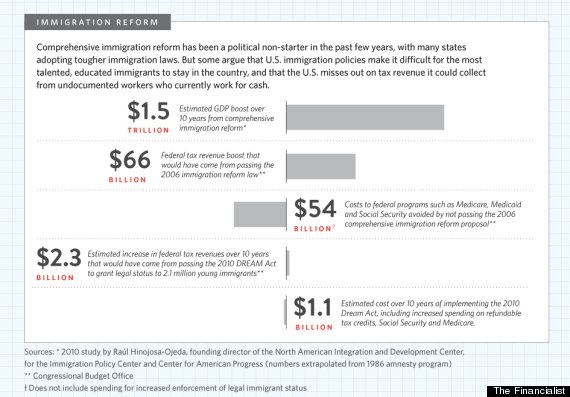 The infographic predicts that comprehensive immigration reform would provide a $1.5 trilion benefit to the GDP over 10 years, along with a $66 billion boost in federal tax collection. Those figures would more than offset the potential costs of the same.

The Financialist modeled its projections on the 2006 comprehensive immigration reform proposal and based the graphic on information from the Congressional Budget Office and a 2010 study by Raúl Hinojosa-Ojeda for the Immigration Policy Center and the Center for American Progress.

The digital publication isn't the only one trying to move the immigration debate beyond social issues into the economic realm. Conservative New York Times columnist David Brooks said in a piece last month that reform advocates should drop the humanitarian argument and instead focus on the economic one:

The forlorn pundit doesn’t even have to make the humanitarian case that immigration reform would be a great victory for human dignity. The cold economic case by itself is so strong.

Increased immigration would boost the U.S. economy. Immigrants are 30 percent more likely to start new businesses than native-born Americans, according to a research summary by Michael Greenstone and Adam Looney of The Hamilton Project. They are more likely to earn patents. A quarter of new high-tech companies with more than $1 million in sales were also founded by the foreign-born.

6 Pols Against A Pathway To Citizenship