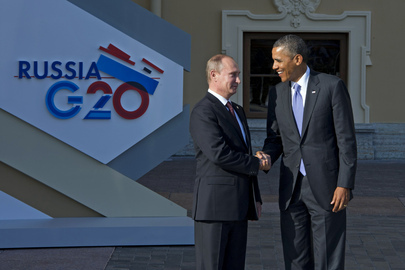 Is the Russian Ruble becoming financial rubble as consequence of targeting by the U.S. and its allies? The dramatic fall in oil prices and commensurate drop in the Russian currency, is this coincidental to broader global economic trends or an orchestrated assault? Will economic warfare become the weapon of choice for 2015 as contrary agendas bring both old adversaries and some longer standing allies into conflict? The UN will be the forum for diplomatic debate where some sharp differences like a long submerged iceberg are now appearing above the surface of a new cold war, from Ukraine to Syria, to the East and South China Seas. However, the equity, debt, currency and commodity markets may be where the scores are settled.

Punishing Putin for Ukraine and Syria via Oil Trading and Prices?

The drop in oil prices, as was its rapid rise over the last two decades, cannot be explained by fundamental economics of demand and supply. In part, the moves probably have been exaggerated by financial speculation. Banks and hedge funds have been players stampeding commodities markets, energy and other resources from metals to food stuffs. Gunvor, a Putin-associated energy "trading firm" has long been connected with the rise of oil prices and with making the Russian strongman and his cronies billions in profits by effectively controlling that country's petroleum sales. Gunvor was one of the first targets of U.S. and allied sanctions post Crimea annexation and Russia's continued intrusion into Ukraine. (Read our post from spring 2014 - "Has Putin Been Manipulating Energy Prices?")

Putin's effective manipulation of oil prices and self-enrichment may have been in part tolerated by multiple U.S. administrations. Republicans saw it benefiting their oil constituency. Democrats saw higher petroleum costs as rationalizing alternative energy as well as dampening fossil fuel demand and emissions. During both Republican and Democratic administrations dating back to the fall of the Berlin Wall there was also the vision, now more like a distant mirage, that Moscow would be a partner if not ally to the Euro-Atlantic democracies. Putin's abuses -- from the suffocation of domestic opposition, to brutality in Chechnya, to bullying of neighbors -- were tolerated in large part in the hope of co-opting the cooperation of the Russian regime. The sharp rise of energy was a costly premium to pay, but it allowed Putin to economically stabilize a deteriorating Russia, even if the base was not solid but rather fluid.

Paying for a Resurrected "Imperial Agenda"The rise in oil and other commodities though also allowed Vladimir Putin to put into action a new imperial project. The invasions of Georgia and Ukraine are only the most visible of the effort for the Moscow leadership to reassert its influence on regional proxy despots and strongmen. The new riches had also facilitated Putin's narrative. He has deftly mixed windfall energy profits tossed at real economic pain and injured national pride with personality cult. However, with the illusion of new Moscow fading and the old Kremlin style reappearing, in Europe and Washington tolerance for Putin's excesses has also gone.

Saudi Arabia is the Stick on Putin's Donkey? 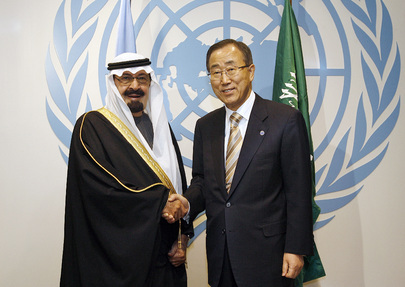 The role of Saudi Arabia in effectively talking prices down has been the topic of much speculation. Some attribute it to the world's largest oil producer's simple strategy of maintaining its share of the market by forcing other producers, OPEC and non, to decrease their production. Some though argue that this is a Saudi effort to subvert new U.S.-based and higher cost-production including fracking. Others still see it as an economic assault upon competing regimes in Iran and Iraq.

Often there is no explicit "conspiratorial" agreement, but in this instance there is an implicit understanding that U.S., EU, and Saudi interests do converge particularly on punishing Putin for his support of the Assad Regime in the Syria conflict and diminishing the potential rise of a new axis that spans from Moscow to Caracas. U.S. and Saudi interests converge more frequently than the rhetoric which makes OPEC and "Arabs" convenient flogging targets in U.S. domestic politics. Saudi Arabia has much to remedy in terms of its human rights standards. However, it has been a reliable Washington and EU ally as well as purchaser of consumer goods and weapons. Most critically from Riyadh's perspective, this is also an opportunity for Saudi Arabia to reassert its key global and regional role via its most effective diplomatic tool, oil and economic relevance.

The drop in petroleum prices has also dragged down other commodities, including industrial metals. Again, keeping in mind that there is no perfect symmetry as in most conspiracy theories, some Euro-Atlantic allies as Australia, Canada and Mexico are being hurt disproportionately. Their economies in significant part are reliant upon natural resources. On the other hand, some other non-allies as China may substantially benefit. However, U.S., EU and Japanese economies will generally benefit while the rapid drop and particularly the painful adjustments will most hurt Russia, Venezuela, Iran and less transparent economies. Some of these regimes may need to seek IMF and/or World Bank relief. This will be another opportunity for the U.S. and allies, whose influence is dominant in these international multilateral institutions, to discipline spendthrift regimes.

However, all may not be calm between the allies. Japan and Europe are caught in an extended downdraft. Depreciating the Yen appears a pillar of Tokyo's rehabilitation plan and may be ever more the remedy of choice for most European leaderships, with the notable exception of Germany and The Netherlands. The U.S. may find its exports increasingly uncompetitive with a rising U.S. Dollar. For this reason, it has encouraged more structural changes and particularly moving toward growth inducements rather than the relatively unproductive austerity policy favored by the Merkel-led government in Berlin. However, it is more likely that the very survival of the Eurozone (and the Euro as currency) will be challenged from within by European governments as in Paris or Athens or in Rome or even the ECB (European Central Bank) who see a need for fiscal and monetary accommodation rather than staying the course of austerity which has long lost wind to its sails and direction to its rudder.

Swimming in a China Sea

Conflicting claims to territorial seas/islands has pitted China against most of its neighbors. Military confrontation appeared almost inevitable before reason prevailed. The countries of South and East Asia including China are economically interdependent as markets and producers. The history of Japan, China conflict highlights a combustible nationalism that is frequently the pretext for competing for natural resources and regional economic influence. Beijing has sought to avoid multilateral institutions as the UN or the International Court of Justice to resolve such disputes and prefers bilateralism where it can employ its economic and military might to press smaller neighbors as Vietnam or Malaysia. The scales of diplomatic might though have been at least in part tipped. The U.S. has been invited into the jockeying by allies such as the Philippines. The regional economic and political regional association has also served to provide some balance. Nonetheless, China still dominates not only because of its rising military might but Chinese-dominated capital that defines funds flows throughout the region.

The BRICS (Brazil, Russia, India, China, and South Africa) had been brought closer together by an emerging economic symbiosis but there may now be a further evolution and perhaps realignment of interests. The BRICS were defined by a status of emerging markets, both producers of natural resources and consumers seeking accelerated industrialization. As long as China was hungry for ores to oil, the economic interests were compatible, and, oh yes, the under-served markets of developing states in Africa and Asia were also particularly fertile for China-made products and investment.

At the UN though, the diverse diplomatic agenda of the BRICS was most notably sown together by an anti-U.S. bias. This could perhaps be rationalized by a strategy to disrupt a uni-polar, Washington-dominated globe, particularly in the spirit of the "Non-Aligned Movement" that evolved in the Cold War as an alternative to Soviet Union or U.S. alliance. However, this rationale is contradictory as Beijing and Moscow also see themselves dominating their spheres of influence, geographically, economically, and at times ideologically. In many developing states, particularly Africa, Beijing does buy influence with aid and a laissez-faire human rights criteria. However, China is also perceived by some as exploitative and exercising a competitive mercantilism that wipes away local competitors and reminds of previous European neocolonial powers.

China's appetite for natural resources is being gradually tempered by the maturing of its own export-based economy. As prices for commodities drop, the premiums enjoyed by those selling to China will shrink and potentially evolve toward more adversarial rather than compatible agendas. One has to also wonder if Beijing feels inclined to renegotiate its recent massive deal to purchase Russian natural gas and oil. In other words, the apparent glut, or at least one inflicted by Washington and allies, has disrupted not only prices but what were probably perceived as longer standing economic interests of mutual benefit.

Contagion Risk or Windfall Opportunity?In real combat, soldiers and civilians are killed, frequently all are targets. Economic warfare and sanctions though also have ordinary people as at least collateral casualties. Trying to temper the leadership in Moscow or Iran or ... well, it certainly may be the only or at least better option than military conflict to counter the unbounded ambitions of despots as Putin. An additional bonus, we may be able to avoid World War 3. However, economic warfare can also be like mustard gas, if the wind blows back the wrong way. Sanctions on a smaller state may only marginally impact broader global economic health. However, globalization has created the opportunity for both symbiosis and contagion. Whether the threat is real or not, it is no coincidence that the fate of European and U.S. equity markets has also swung with the decline and/or rise of the Rubble, even if the Russian economy is dwarfed by that of the U.S., EU, or China. Most notably, global investor sentiment and that of consumers may be swayed not so much by the tangible or the known but the uncertainty that darkens as 2015 dawns.

A drop in energy prices should be a huge windfall for most developed economies, a wind in their sails even as malaise has been the recent history. The resilience of the U.S. economy gives optimism. Perhaps the medicine may finally heal ailing and East Asia economies. However, not all are winners or even survivors where disruption targeted and otherwise may claim unforeseen casualties of economic conflict and cloud the confidence of investors and consumers more broadly.