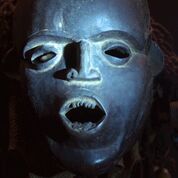 When a Cro Magnon rib cage can bring $500-5000 at an archaeological antiquities auction, or an inflatable orange plastic dog sells to major collector for $58 million, the value of art's capacity to restore the soul comes into question. Many of the today's master collectors--e.g. LA real estate entrepreneur Eli Broad, globalists Donald and Mera Rubell, hedge fund mogul Stephen Cohen, equity manipulator Leon Black among them--seem truly touched by the power of art, but their commercial counselors are never far away from the checkbook.

Those considerations, among others, are at the core of two surprising exhibitions at Bordeaux's always provocative Museum of Contemporary Art, or CAPC. Video artist Ali Cherri, considers a series of living, dead and modeled heads, drawing us to confront the nature of how we see our primordial and displaced predecessors, the actual people inside those museum heads, the sort whom ex-British Prime David Cameron warned were a "swarm of migrants" crashing at England's gates--a soft spoken version of America's latest fart into the face of immigrant souls. 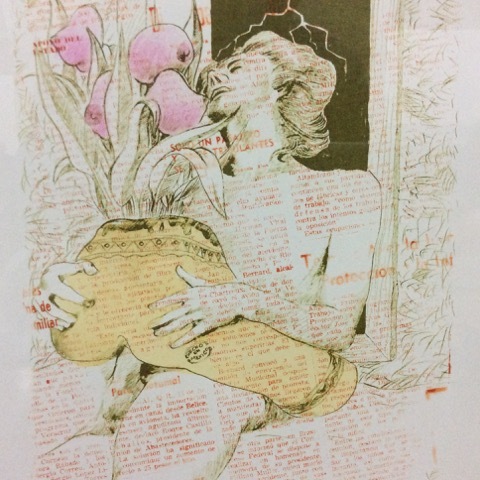 That's the top floor of the CAPC. Descend one floor and you find yourself surrounded by another sort of populist rebellion from another time that resisted the nexus of art and money. It flourished half a century ago in hippy art collectives of Southwest England, gathered together by a collaborative printing commune that called itself the Beau Geste Press. Surviving frugally outside the cash economy, they specialized in silkscreen pamphlets, posters and hand made books, passionately defiant of that era's slick commercial magazine world.

Both shows lure us to reflect about what art objects mean to us personally, how they have come to made and whether art for the soul can truly be separated from how it is made and how we have come to discover it. The silkscreens of the 70s dared to be naughty in journals like Schmuck (in street Yiddish "dickhead) that celebrated actual erotic bodies as rebel flowers exploding the banal limits of respectable mass-market decoration. For artists like Martha Hellion, that brief window half a century ago may have seemed, from today's market obsessed atmosphere, may seem naively exuberant in its aim to liberate the unity unity of body and soul.

A Mexican architect by trade and training, Martha Hellion drifted into so-called "underground" publishing through working on the archetypal "underground" silkscreen paper Oracle. "We never went out to do our work. We are living our work. Making papers and books: It was to make productions that allow us to create and develop our work without being inside the trendy wave of the art market. We were making our own productions, our own books, sometimes without any money, and distributing them by hand and through the post office. It was a very intense time."

One of the founders of Beau Geste Press, Hellion came to Bordeaux for the opening to join hands and inky gloves with a new generation of artist collectives in the Aquitaine region of southwest France who continue to produce both new silkscreen papers and to fashion contemporary sculpture that recalls the technology of pre-computer collectivist art. 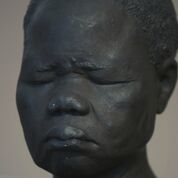 Back upstairs Ali Cherri's collection of primordial skulls gather themselves together to stare back with piercing blind eyes at those of us who come to visit, gaze, and often, to pity their stylish primitivism. Both in the collection of stone and bone heads Cherri picked up at auction markets, and in his dream-sequence film in the next room, he takes us into the eyes, the noses, the ears the brows and the teethless mouths of those beings. He bids us to free them from their static imprisonment in the sterile glass cases of Paris's grand museums (or of the Smithsonian), to confront both their lives and ours as visitors, to engage with them outside the archaeological collectors markets that have ossified their stories and rendered them safe. 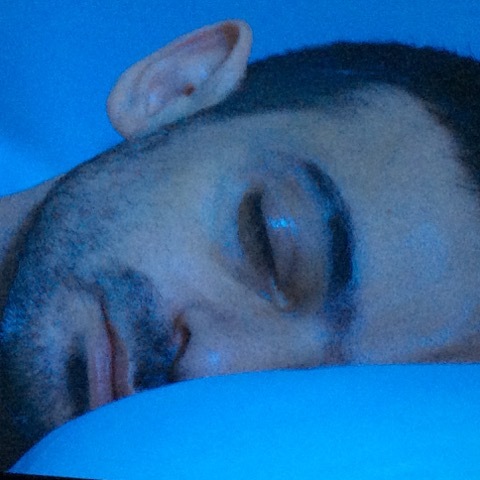 Produced jointly with Paris's Jeu de Paume museum, Cherri calls his work Somniculus, using a museum visitor as a sleeping voyager whose eyes are closed not so tightly as death requires but more lightly as during the fluttering dreams that guide us to explore both the living and the lost lives of our world.

Cherri's presentation is the first of four CAPC expositions this year curated under the overall theme, "The Economy of Living Things," be they undocumented peoples on the move or birds in climate flight, visual stories told through the pathways of dreams, songs and stories, all aimed at penetrating and shattering the political boundaries constructed and defended by war and wealth. 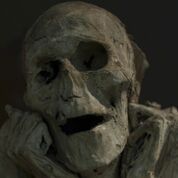