A new economics paper explains why the U.S. recession ended only for people in the top 5% and is actually continuing for the bottom 80%.

Here are charts showing this phenomenon, of only the rich doing well after the "recession" "ended" in June 2009 (which it really did not, at all, end, except for the top fifth of Americans, as you will see here): 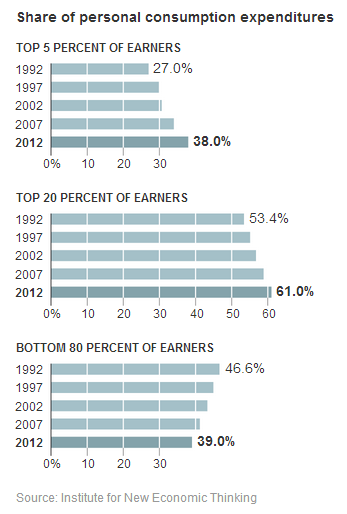 According to existing economic theory, the distribution of wealth doesn't affect the aggregate production and consumption of wealth -- it just goes to different people, that's all. However, the evidence of the weak U.S. "recovery" suggests that mainstream economic theory is actually false. The average American continues in depression, while economic inequality soars and the rich are doing well, under President Obama and the Republicans in Congress. A graph shows that the statement that economists have been asserting, on the basis of their false economic theory, to the effect that the recession ended in June of 2009, is actually itself clearly false, a fraud even about the U.S. economy overall. This shocking graph is from Doug Short at Sentier Research: 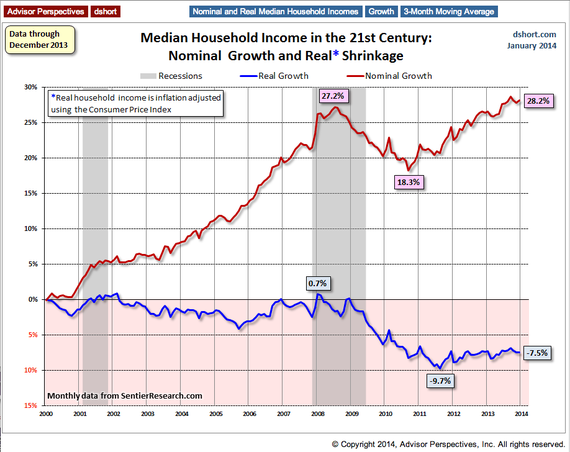 The reason why the U.S. recession ended only for people in the top 5% is that federal policies are encouraging a transfer of wealth from the bottom 95% to the top 5%. The top 5% (which includes almost everyone who is benefiting from the bailouts of Wall Street) are lending money to the bottom 95%, for auto loans, mortgages, credit cards, and increasingly (especially) for student debt (as the unemployed desperately try to become "employable" via advanced education), so that the debt-to-income ratio has been rising sharply for the bottom 95%, whereas the top 5% are mainly creditors and have maintained a fairly steady (and much lower) debt-to-income ratio throughout the period. The reason why the "recovery" after the crash of 2008 has been weak is that there has been no real recovery for the bottom 95%, so that the top 5% are increasingly needing to worry about whether the bottom 95% will ever pay back the debts they owe. The longer that the bottom 95% continue borrowing, the closer that the national economy gets to yet another collapse, with rising personal bankruptcies among the bottom 95%, which will cause the net worths of the top 5% to plunge yet again, much as had happened in 2008 when the housing market collapsed and the Federal Government bailed out mainly just the top 1%. (Republicans fought hard for there to be no "stimulus" at all for the bottom 99%, but Democrats managed to get almost $800 billion in such stimulus for the bottom 99% approved. It wasn't nearly enough, however, and the nation simply could not afford the bailouts that it was giving to the rich. But the Federal Reserve and U.S. Treasury have been successfully postponing the subsequent crash, which still is inevitable. It can't be avoided merely by continued protection of the rich.)

In other words: the Federal Government's bailing investors out of their bad gambles is not trickling down, after all, but is instead just using those future tax dollars (the federal debt), from everybody in the future, in order to protect today's very wealthiest from losing money on their bad bets. The losses are being socialized, while the gains remain private (to the top 0.01% mainly). This is "capitalism for the poor, socialism for the rich." It's today's America.

Instead of increasing food stamps, etc., to take up the increasing need, the tax cuts for the top 5% are being continued almost entirely. (Republicans demanded that they be continued 100% for the top 0.00001%, but Obama wouldn't permit that.) Instead of extending unemployment benefits, etc., so that the poor will be able to buy at least what's necessary in order for them to live, and so to provide markets for the goods and services that are being produced, U.S. taxpayers just continue bailing out the top 1% (via the Fed's "QE" and other means). The Grover Norquist Republican "No New Taxes" pledge is depriving the bottom 95% of their ability to repay their mounting debts to the top 5%. Adam Smith's "invisible hand" of God is turning out to have been only the secret hand of the aristocracy, operating behind closed doors, via lobbyists. That's the bailouts (most of which aren't even being called "bailouts").

The new economics paper documenting this is from two prominent economists, Barry Z. Cynamon and Steven M. Fazzari, and is titled "Inequality, the Great Recession, and Slow Recovery." The following figure from it shows that the bottom line, which represents the top 5%, haven't been going deeper into debt but have stayed pretty near 60% debt-to-income ratio ever since at least 1989, but that the debt-to-income level of the bottom 95% (the top line) soared when George W. Bush came into office (from about 105% to about 145%, the period of building up the 2008 crash), and then declined a bit after Barack Obama became President (to about 140%), but still remains very high, so that only a little bit of the wealth from the top 5% has actually been trickling down, and the bottom 95% thus still remain hopelessly in debt (now with debts that are around 40% higher than their annual income): 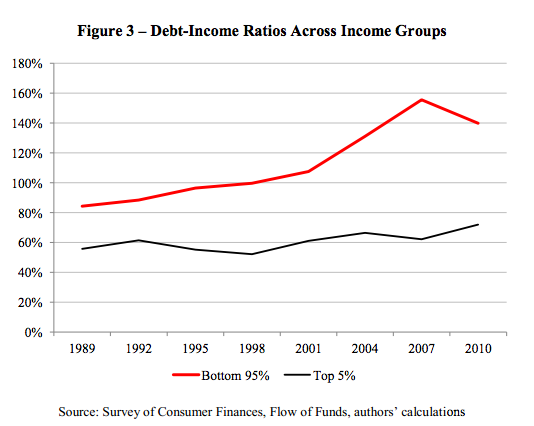 This continued strain for the bottom 95% is the inevitable result of the soaring percentage of U.S. income that goes to the top 5%, as shown here: 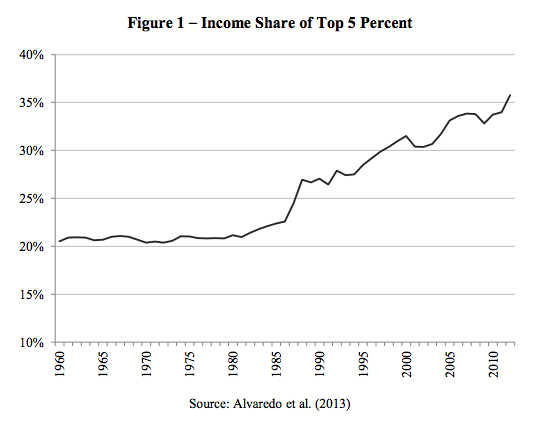 Doctors Cynamon and Fazzari say, in their paper, "The inability of the bottom 95% to generate adequate demand [purchases of goods and services] helps explain the slow recovery. ... The high level of income inequality is an important cause of this unfortunate history."

They propose that existing economic theory (which denies that the wealth distribution affects the economy) is false, and that a theory by economist Hyman Minsky, from 1986, is true, which acknowledges that soaring economic inequality can itself cause a nation's economic decline.

Though Cynamon and Fazzari don't point out the fact, this theory didn't actually originate with Minsky, but was instead first introduced in the 1930s by Marriner C. Eccles, whom FDR appointed as Chairman of the Federal Reserve. Eccles was made the Fed Chairman because in 1932 he had originated this theory, the theory that also fits the current U.S. experience, and which economists (who generally don't know much about history) call "Minsky's theory." The theory is now being mathematically formalized by the economist Steven Keen. He likewise credits the theory to Minsky, as its supposed originator. Minsky first stated the theory around 50 years after Eccles did, but Eccles wasn't a professional economist, and so economists have simply ignored him. Eccles was the first great economist, and his papers from the 1930s still haven't been published. Most economists, unlike Cynamon, Fazzari, Keen, and a few others, insist upon sticking with the existing economic theory, which goes back to Adam Smith, who adopted it from the French physiocrats a decade or so before Smith. But it's false; it's not at all scientific, and never was, though (like physics before Galileo) it has become highly mathematical.