America has been doing income taxes wrong for more than 50 years.

The top tax rate that makes all citizens, including the highest 1 percent of earners, the best off is “somewhere between 85 and 90 percent,” Krueger told The Huffington Post. Currently, the top rate of 39.6 percent is paid on income above $406,750 for individuals and $457,600 for couples.

Fewer than 1 percent of Americans, or about 1.3 million people, reach that top bracket.

Here is the conclusion from the report, charted: 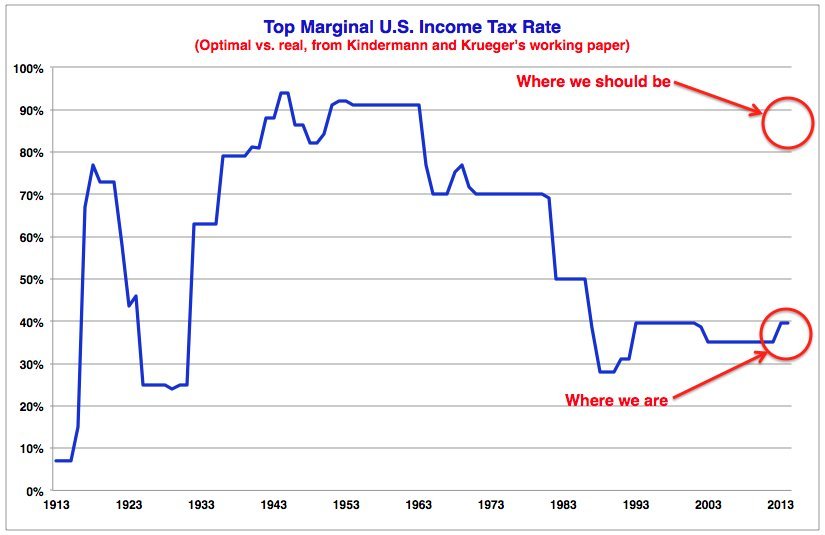 What you’re seeing is decades of a more or less strict adherence to the gospel that tax cuts for the highest income earners are good. The trend began with President Kennedy, but his cuts were hardly radical. He lowered rates when the American economy was humming along, no longer paying for World War II and, relative to today, an egalitarian dreamland. To put things in perspective, Kennedy cut rates to around 70 percent, a level we can hardly imagine raising them to today. The huge drops -- from 70 percent to 50 percent to less than 30 percent -- came with the Reagan presidency.

In comparison to decades of cuts, Presidents George H.W. Bush, Bill Clinton, and Barack Obama each raised taxes at the top by a historically insignificant amount. Obama also proposed modest tax increases, raising taxes on families making more than $250,000 from 33 to 36 percent, and on individuals making more than $200,000 from 36 to 39.6 percent. These increases failed in the House.

A very high marginal tax rate isn’t effective if it’s riddled with loopholes, of course. Kindermann and Krueger's paper is also focused solely on income, not wealth, and returns on wealth are how the truly superrich make a living.

Despite these limitations, Kindermann and Krueger say that a top marginal tax rate in the range of 90 percent would decrease both income and wealth inequality, bring in more money for the government and increase everyone’s well-being -- even those subject to the new, much higher income tax rate.

“High marginal tax rates provide social insurance against not making it into the 1 percent,” Krueger told The Huffington Post. Here’s what he means: There’s a small chance of moving up to the top rung of the income ladder, Krueger said. If rates are high for the top earners and low for everyone else, there’s a big chance you will pay a low rate and a small chance you will pay a high rate. Given these odds, it is rational to accept high income tax rates on top earners and low rates for the rest as a form of insurance.

This insurance takes the form of low-income people paying dramatically less in taxes. “Everyone who is below four times median income” -- that’s about $210,000 for households -- “pays less,” Kruger said.

The paper assumes that tax rates won’t stop a future Bill Gates from wanting to start Microsoft. Instead, what it finds is that labor supply among the 1 percent would decline -- translation, they would work a little less -- but it “does not collapse.” That’s because of who the authors assume makes up the top income bracket: celebrities, sports stars, and entrepreneurs -- people with innate talents that are hugely rewarding, but only for a short period of time. They only have a few years to use their skills to make most of the money they will ever make. High tax rates don’t lessen their degree of desire to be productive, the authors said.

Krueger described the phenomenon like this: “How much less hard would LeBron James play basketball if he were taxed at a much higher rate? The answer is not much. “James knows he only has five years,” or so of peak earning potential, Krueger said, and so he will work to make as much as he can during that time. If high income tax rates robbed the would-be 1 percent of their stick-to-itiveness, the paper’s conclusions would change. 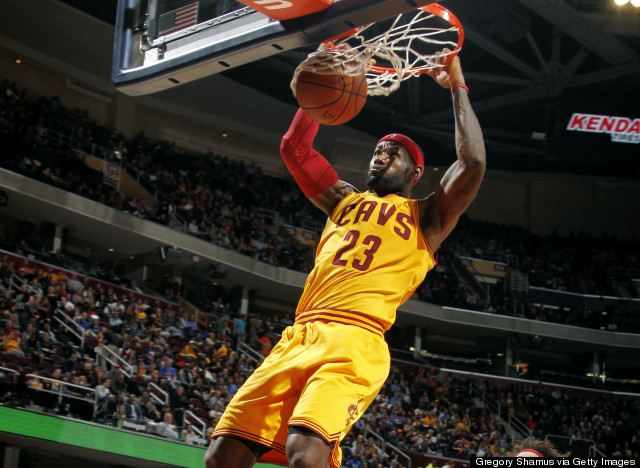 And so whether you agree with this paper’s conclusion comes down, to a certain extent, to what you think of the 1 percent of income earners: who they are and why they make so much money. Over the last few decades, a huge portion of the rapid growth of the very highest incomes relative to the rest of us has been driven by rising executive and financial sector pay. The question, then, is if confronted with a vastly higher tax rate, would Jamie Dimon still behave like LeBron James.