I ran into a couple of articles Thursday that got me thinking about a big, important topic: the mismatch between supply and demand in the labor market. And not just the cyclical part since the Great Recession took hold, but the structural part the pre-dated it.

The first piece, by Bloomberg's Mike Dorning, documents the long term decline in the employment rates (share of the population employed) of "prime-age" -- 25-54 -- men. The employment rate is the economist's first proxy for labor demand, and the long-term, structural decline for men suggests demand shifts against them, especially those without college degrees. 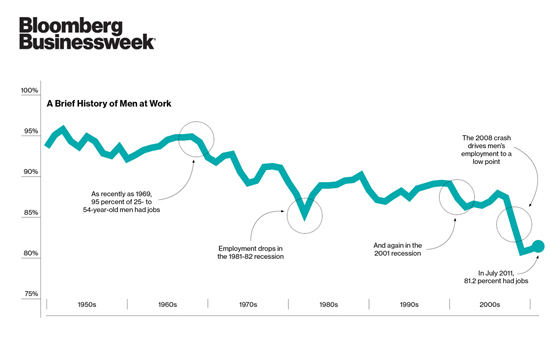 Economists tend to ascribe such trends to two factors: technology and trade. Globalization and the ability to shift production abroad have surely hurt non-college educated prime-age men, both through increased labor supply and decreased labor demand.

Technology is trickier to assess. There's lots of talk about "skill mismatch" -- employers' skill requirements leaving such workers in the lurch, and while there's something to that, the evidence is scarce. Dorning cites interesting work by labor economist Larry Katz on technology's impact as a "hollowing out" of the middle in terms of skill demands:

The impact has been greatest on moderately skilled men, especially those without a college education, though even men with bachelor's degrees from less selective schools are beginning to see their position erode. "There's really been this polarization in the middle," Katz says, as men at the top of the education and income scale see their earnings rise while those in the middle gravitate downward.

The idea is that repetitive, mechanized tasks not involving human contact can be replaced by computers. So at the low end of the pay scale, there is demand for child-care workers, home-health aids, and food prep workers; at the high end, for designers, systems analysts, physicians, lawyers, etc. But in the middle, if you did repetitive work in a factory, for example (and the factory was by some miracle still here in the U.S.), you could find yourself competing with a robot.

Here again, I'm sure there's something to this, but it's not obvious why growing fields like health care, office work, building (once we recover from the housing bubble), transportation, security, maintenance, can't generate considerable demand for middle-skilled men.

The second piece, by Catherine Rampell, featured the recent, sharp decline in youth employment (age 16-24) using the same metric. This looks somewhat more cyclical to me, though the decline predated the recession. That's a hint which I'll come back to in a minute. 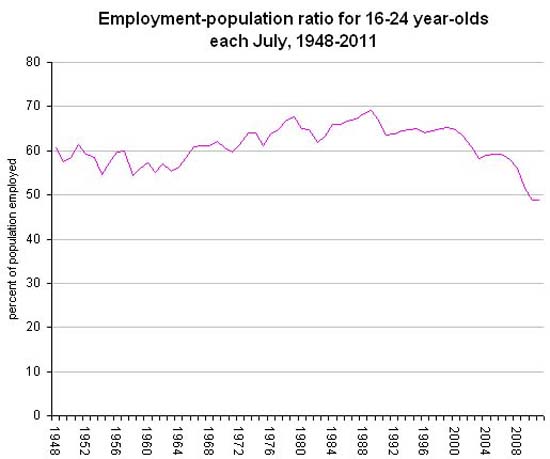 Both of these articles led me to reflect on this next graph -- one I've posted before showing the growth in productivity -- output per hour of work -- and employment, with both series from the private sector. And I'm continuously and deeply troubled by the divergence between growing, even accelerating, productivity and stagnating job growth. 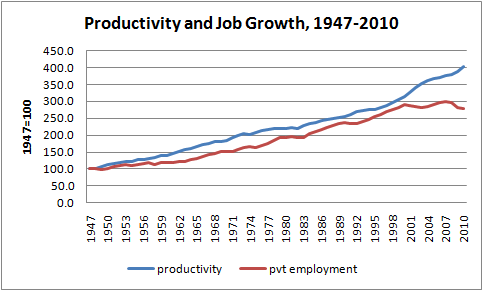 The basic reason why these lines grow together over the long haul and why I believe they diverge at the end is a common concept, a common word you hear all the time, but is poorly understood these days, even (especially) by many economists: DEMAND.

I think, perhaps even more so than globalization or technology (and they're all intertwined), this concept explains all three of the above figures.

Throughout our history, and that of other economies, while we were more productive, we also created more demand for goods, services, projects, trips, endeavors, energy, public infrastructure, moonshots, schools, music, knowledge... you name it. That was the intervening variable that soaked up, if you will, the faster productivity growth, and enabled us to keep adding jobs, even as we could produce more output per hour.

But since the 2000s, when the split in last graph begins, the U.S. economy simply hasn't been creating enough demand to absorb productivity's growth. That been particularly acute and evident in the recession, of course, but it predates the downturn, especially, though not exclusively, for prime-age men.

I'll elaborate soon, but for now, look at the end of that last figure and ask yourself the key, central, most critical question about the future of this country: are we capable of self-correction? Because a system that cannot self-correct is a system in decline.