As a follow up to a community-led victory in the Iowa City school district, which recently enacted a temporary moratorium on pesticide use, members with the Ecopolis Forum and Backyard Abundance are hosting a special forum on "Reducing Pesticides, School and Community Models That Work," featuring nationally acclaimed agricultural engineer and ecologist Dr. Kamyar Enshayan on Monday, Nov. 30th, at the Iowa City Public Library.

Director of the Center for Energy & Environmental Education at the University of Northern Iowa, Enshayan has lectured widely on the issues of pesticides and took a lead role in Cedar Falls' "Yard for Kids" initiative. At a recent workshop on pesticides for the National Environmental Health Association, Enshayan addressed four main points: Pesticide use is widespread, and driven by current monoculture cropping systems; Rural Iowans are at highest risk of pesticide exposure; More protective public health policies are urgently needed; and Ecological alternatives to pesticides are practical, effective and can be less costly.

Pesticide and herbicide policies vary from state to state, and city to town. California gained national attention recently, after its state environmental protection office signaled its intent to list glyphosate--an active ingredient in Monsanto's Roundup herbicide--as carcinogenic. After banning the use of certain pesticides on school grounds, Connecticut recently passed a bill to extend that ban to public playgrounds.

Pesticide and herbicide use emerged as a hot issue in the Iowa City school board race earlier this year, after the World Health Organization announced that glyphosate, one of the most widely used herbicides, is "probably carcinogenic to humans." Two months ago, the Iowa City Community School District passed an immediate moratorium on pesticide and herbicide use on school grounds, and set up a special task force to examine the district's integrated pest management policy.

I interviewed Enshayan in advance of the program on how Iowa City can build on its moratorium and look at other community models for practical approaches. 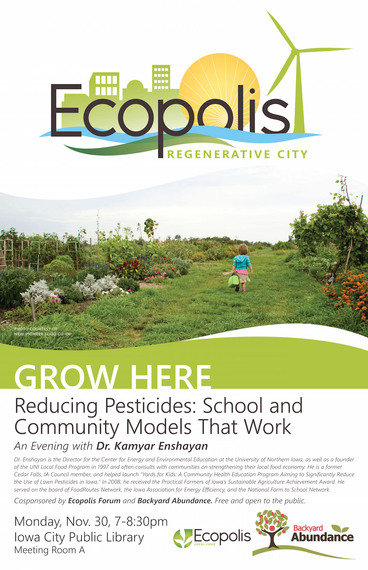 Jeff Biggers: Why should a parent with kids at local schools, a student on campus, or a town resident who plays in the parks and backyards or gardens be concerned about pesticide/herbicide use? What are some of the health concerns, especially?

Kamyar Enshayan: I have learned from pediatricians that children's immune system is not fully developed and they are more vulnerable to hazardous materials. You and I do not lick the lawn or the carpet, they do. Grown ups do not chew their shoes after they have stepped on a lawn that has been sprayed, children do. Children are at the ground level, touching things and putting everything in their mouths.

It is now known that a mom's exposure to common pesticides can affect the development of the baby during key stages of development, resulting in lifelong developmental disorders. Pesticides (herbicides, insecticides, fungicides) are inherently dangerous and were designed to interfere with living organisms and do damage. Because the routine use of pesticides are entirely unnecessary and that practical and effective alternatives exist, it simply makes sense to eliminate their use in schools, day care centers, parks and other public spaces.

JB: Describe some the background factors that led you and Cedar Falls to rethink your pesticide/herbicide use.

KE: Some 15 years ago I approached the park officials in Waterloo and Cedar Falls, as well as school officials to see what we could do to significantly reduce the use of weedkillers on park and school grounds. A number of Waterloo parks were designated as pesticide-free and Cedar Falls went from 100% of park grounds sprayed to only 5% of grounds sprayed (there has been some slippage recently!). Schools in our metro area have not participated much in the past or now, there is no parent organized effort yet in our area. 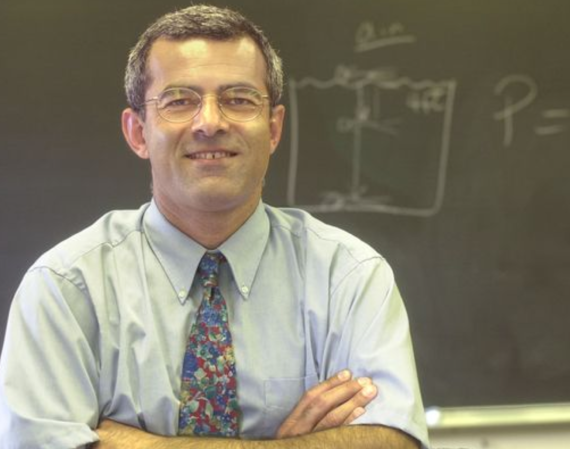 JB: How do Cedar Falls effectively change its policies and usage? And was it a particularly costly change?

KE: In our metro area, there was really no policy formally adopted that restricted pesticide use, it was simply staff doing it. In Cedar Falls, the park division saved roughly $10,000 per year, and resulted in several hundred gallons of herbicides not used.

JB: What are some best models for pesticide/herbicide use, in terms of other schools or town?

KE: The obsession with weed-free lawn is entirely a cultural construct and the good news is that we can change it! It is easy, it is healthy, it will save us money, and it will be better for our waterways.