In the "Mosquito Flats" neighborhood devastated by the historic 2008 flood in Iowa City, can an orchard of pawpaw trees lead to a revival of agroforestry and a food hub along the Iowa River?

Along with its exotic taste and health benefits, the pawpaw fruit has been considered a "tropical fruit for temperate climates." Bon Appetit Magazine recently called it the "best American fruit you've never eaten."

Until the 1950s, the Mosquito Flats served as a natural wetlands and rented farm land. Caving in to the pressures of local developers, the Iowa City Council allowed the flood plain to be developed in 1959 as Parkview Terrace. "All actors in Iowa's 1993 and 2008 tragic floods, we can see now," wrote Iowa naturalist Connie Mutel in A Watershed Year: Anatomy of the Iowa Floods of 2008, "were living with a false sense of security."

Today, the Mosquito Flats area is a depopulated district. After purchasing more than 90 properties in the area and other flood zones, the city of Iowa City must maintain the grassy lots and unproductive parcels.

Calling on Iowans to launch a similar reforestation campaign more than a hundred years ago, University of Iowa President Thomas MacBride declared "every rain-washed gully should be kept sacredly covered with trees; every gorge, sinkhole, should be shaded, every spring be protected, every streamlet and every stream," should be covered in trees as a way of staving off future floods. "The question is whether we do the right thing now or wait until the expense shall have increased a hundredfold."

Is it time for Iowa City to finally rename the area, build up its green infrastructure and turn those empty lots into orchards, agroforestry or biodiversity hotspots? 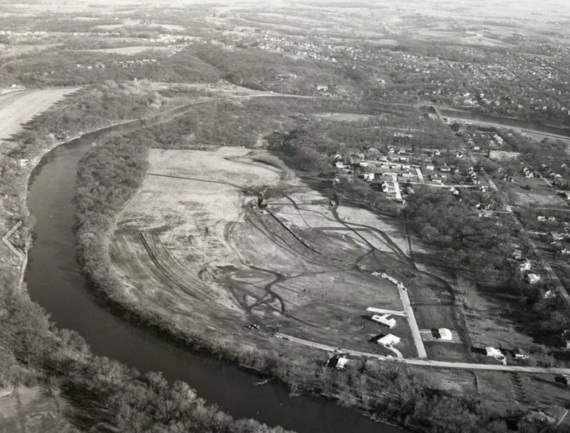 I caught up with Wahl and Dice recently for an interview.

Jeff Biggers: How would you describe your Red Fern Farm and its operations?

Tom Wahl and Kathy Dice: Red Fern Farm is a diversified fruit and nut production farm, plus a nursery of trees and shrubs that produce those fruits and nuts. Called a food forest, forest garden, or example of agroforestry, we have over 60 different species of fruits and nuts growing on our farm, including all of the familiar ones like apple, pear, cherry, plum, raspberry and blueberry, but also more obscure species like persimmon, pawpaw, medlar, che, and kousa. Chestnuts are our main crop.

JB: What's so unique about the paw paw tree for Iowa? And why not pursue other fruit trees?

TW and KD: Besides being the largest fruit native to North America, pawpaw is unique in that it is the only temperate member of a family (the custard apple family) of otherwise strictly tropical fruits. Other fruits in the family include cherimoya, sweetsop, sugar apple, and guanabana. Pawpaw has a custard-like texture and a very tropical-fruit taste. Most people compare the flavor to a cross between banana and mango. Some people call pawpaws the Midwest mango, it's understated.

JB: Nearly 10 years ago, Edible Iowa River profiled your farm and "seven test paw paw trees" growing outside your farm house door. How did those paw paw trees do, and do you see paw paw trees, among other fruit trees, as part of a more sustainable agriculture in Iowa?

TW and KD: The pawpaws around the house did very well until 2013 when we had a severe drought along with a heavy crop of pawpaw fruit. I neglected to water them so they went into dormancy with very dry soil. That winter ended up being the coldest in 38 years, and since cold penetrates deeper into dry soil compared to moist soil, the roots suffered from cold damage and several trees died. I have a couple of hundred other pawpaw trees on the farm, and I did manage to water those, and they made it through the winter just fine. 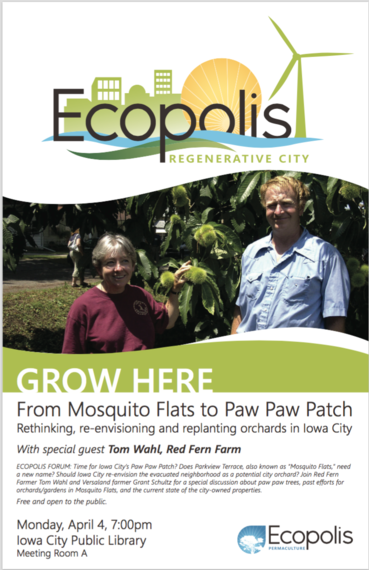 JB: The Mosquito Flats area in Iowa City, the focus of the Ecopolis Forum, is a riverfront neighborhood, in a now depopulated area. How would paw paw trees do along the Iowa River, and what kind of maintenance would be required in a low residential district? And, would the paw paw trees attract an unusual amount of wildlife?

TW and KD: Pawpaw trees are quite flood tolerant, and I would expect them to do well near the bank of the Iowa River in Iowa City. There is a wild stand of pawpaws on the bank of the Iowa River about 30 miles downstream from Iowa City, and it has been there for more than 150 years. There are many acres of wild pawpaws on the shore of Lake Odessa in Louisa County, and those get flooded every time the Mississippi floods. In 1993 those pawpaws stood in water of 5 consecutive months with just their tops sticking out of the water. When the flood waters receded in September the pawpaw trees were the only thing in the forest left alive.

Pawpaws are not bothered by deer browsing or most insects. They have a natural pesticide that even discourages Japanese beetles from eating large quantities of the leaf or twigs. Some young deer will bite a leaf of pawpaw and often you can find where the deer spit out the leaf a few yards away. The main insect that fees on pawpaw are the caterpillars of the zebra swallowtail butterfly.

Pawpaws are slow growing and will be snipped by rabbits (who will bite on anything in reach). It is best to protect them in 2 foot tall solid tree shelters or tubes that allows for diffuse light to reach the tree, protect them from direct sunlight while small, and provide a greenhouse effect. The shelters also aide in finding the small trees. Heavy mulch around the base of the tree will help fight competing weeds.

JB: Anything else you would add?

TW and KD: People have been enjoying pawpaws in Iowa for thousands of years, but there are some cautions with the fruit. Avoid eating the skin or seeds of pawpaws. The chemicals that protect the trees from pests are in the skin and seeds and can make humans ill (vomiting, diarrhea). Wildlife in Iowa know how to enjoy the fallen fruit while avoiding the skin and seeds. Compounds in the unripe fruit and twigs are utilized for anti-cancer treatments that some people have found very beneficial.