Koli and I sped down the road on his motorcycle in a torrential downpour. He had left our motorcycle helmets at the project site, so I held my hand over his eyes like a visor to block out as much of the monsoon rains as I could so that he could see well enough to keep us on the road. The van, holding three of my interns, two large blocks of ice, all of the cooking utensils from my kitchen, two gas stoves and several pounds of food followed us. We got to the edge of town and saw that the road was completely blocked for repairs. While the motorcycle might have been able to squeak around the barricade, the van would never make it; fortunately Koli knew an alternate route out of the city. We were already an hour late: the van was delayed, our landlord had padlocked us in the building and we had to stop at the bazaar to get ice.

There comes a point in every entrepreneur's life when they think to themselves, "What the #$%@ am I doing?!" and August 14th was definitely one of those days for me. The investor meeting had already been rescheduled twice; several investors RSVP'd only to cancel at the last minute. I had invited the District Commissioner, but he wasn't sure if he could show up. As I was speeding down the road, the rain pelting my body with watery spikes, I prayed that the few potential investors who were coming would not cancel because of the rain. At the same time, however, I felt strangely exhilarated and extremely alive. I was pursuing my dream and would do whatever it took to make it succeed.

As we approached the site, I realized that because of the rain the mud road which leads to the Panigram Pavilion would not be able to support the van, so I had Koli call in some of our friends, the local boatmen. Several members of the community were there when we arrived at the bridge. Sensing our distress and urgency, and knowing that this was an important day to raise money for the project that would support their community, they immediately stepped in and helped us transfer our cargo onto small, wooden boats. I was in a rush to get back to Jessore so I could shower, change into a sari and pick our investors up from the airport; I barked a few last commands at my team as they paddled down the river, and I jumped into the van yelling "JAN!" ("GO!)

Ten minutes out of town I heard a "Pop!" The driver pulled over to the side of the road. We had a flat tire. I looked up at the sky and yelled, "Are you kidding?!!" The driver went to get his spare; it was also flat. Now fully into what my mother calls "the red zone", like a general in wartime, I grabbed one tire, commanded the driver to grab the other, and hailed a passing vangari (a truck version of a rickshaw). Twenty minutes later we made it to the nearest town and went to the tire repair store.

I called my interns: nobody answered the phone. Finally, on the fifth attempt, I was able to reach Brian. I asked him to send Koli so that he could drive me back to Jessore so I could get my investors - I would rent an autorickshaw to bring them to the site if I had to. According to Brian, Koli had run into town to pick up a few things and his phone was damaged by the rain so he couldn't be reached. Brian also told me that their white panjabis had been dyed red because my boua tied them in a red gamcha (towel) and the rain had soaked through. Also the lungis, uniforms for our boatmen and rickshawalas, had not been sewn yet. Gratefully, he left out telling me that several important food items had been left at home...

Forty-five minutes passed and our tires still were not ready. Finally Koli gave me a call and I asked him to come take me back to Jessore. I also asked him to call all of our friends in Jessore to see if somebody could pick up our investors from the airport, as their flight was landing in just forty minutes. He made several calls - all of our friends were out of town and our normal autorickshaw driver could not be reached.

As Koli pulled up to the repair shop on his motorcycle, the driver told us the tires were fixed. I got into the van, sent Koli back to the site, and we headed on our way. We pulled up to my apartment in Jessore and I made a mad dash upstairs. In five minutes I tied my sari and brushed my hair. (I counted the rainstorm as my shower for the day!) We pulled up to the airport and I ran to the airline counter to see if our flight had arrived yet. The agent said it was coming in for a landing now. Unbelievably I was not late! 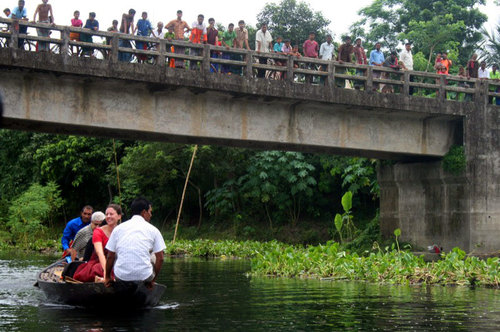 My architect, my potential investor, and I taking the boat to the Panigram Pavilion

I picked up an umbrella, put on a smile, and jovially met my potential investor and my architect at the airport. The sun started to peak out around the clouds. We headed on to the project site. I told them that we had to pick up the Chief of Police, so I wouldn't be able to take them the "pretty" way to the site, but that it should be a short forty minute drive. They looked out the window, admiring the pastoral scenery, and said, "this ISN'T the pretty way?"

As we pulled up at the bridge, I remembered that I forgot to give my interns the fifteen minute warning call! I quickly called Jonathon and he had all of the interns change into their uniforms on the pavilion before we pulled up in the boats. 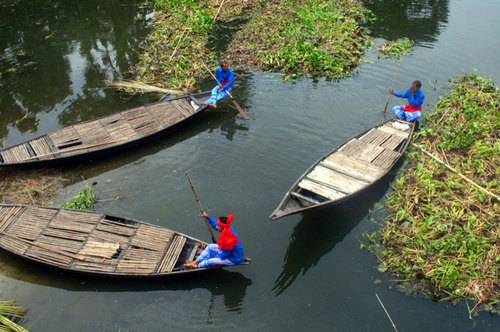 Everyone was impressed by the beauty of the river and the site. They loved the idea of taking the boats to get to the resort and suggested that I make that the permanent way to get to Panigram. As our boat docked at the pavilion, Jonathon was standing guard in his white(!) panjabi holding a tray of cool, scented towels for our guests. We served them mango lemonade and mint iced tea and then I took them for a tour of the project site. The sun was finally shining and our guests fell in love with our trees and the river views. 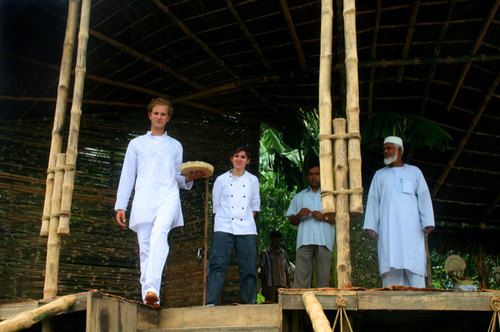 Jonathon, Janine, a member of the union council, and the Union Council Chairman waiting for us as we pull up to the pavilion

We headed back to the pavilion and several of our guests wanted to take namaj (go for Friday prayers), so we had the boats take them to a little mosque near the bridge. When they returned, we served them a fabulous Bangladeshi fusion meal designed by my culinary intern Janine. The food was an enormous success! As we finished dessert, the District Commissioner (DC) arrived! He brought several of his deputies with him including the Thana and Upazila Chairmen. My investors insisted that the DC taste some of the food, even though he had already eaten lunch. Fortunately, we had planned ahead and I had Janine prepare the extra food that we brought. Everyone agreed - the food was fantastic! 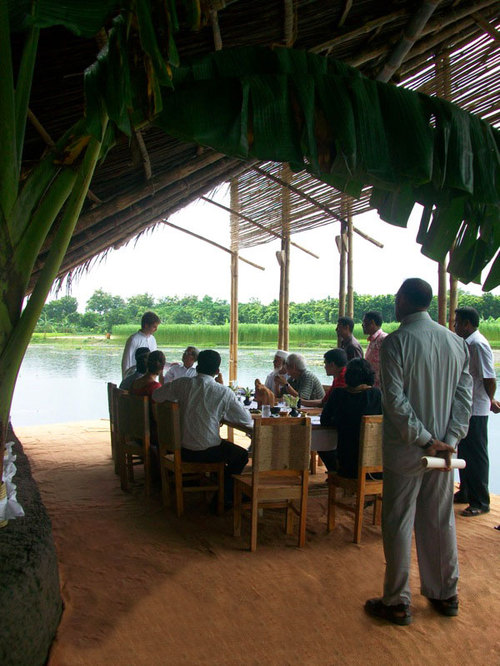 I told the government officials a bit more about my project - how I am hoping to build an environmentally responsible resort that improves the lives of the people in our host community. I explained how I intended to create new jobs and support local artists and craftsmen by reviving some of the arts that are now being lost in Bangladesh - like jute products, pottery, and palm leaf goods. I gave everyone a gift basket that included examples of things that I talked about. When I finished, the DC told his deputies and the Chief of Police to give me any assistance that I would need to make my resort successful. Having government support in Bangladesh is extremely important, so this was a big win for us. 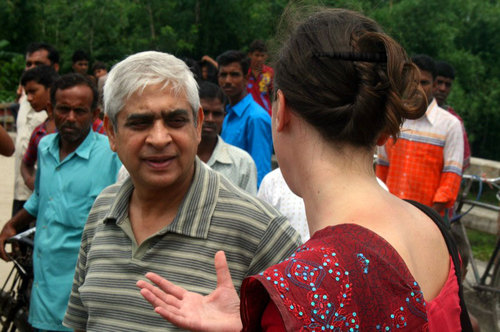 When the DC and his entourage left, just my potential investor and architect were left at the site. Though Jonathon had spent weeks planning a lovely boat tour and rickshaw ride through the surrounding countryside, because of the namaj and the DC's visit we were very behind schedule and only had time for a small boat ride to the end of the property before we had to head back to the airport. Both of my guests were eager to explore the river, however, so I hailed our brightly colored boatmen and set off. A light rain enhanced the experience; we were prepared with large umbrellas and enjoyed being on the water in the monsoon.

At the end of the day, I felt confident that I had delivered what I promised - a luxurious taste of Bangladeshi village life in a beautiful, relaxing environment supported by first class customer service. As we stepped from the boats back onto the pavilion, the investor held out his hand and said, "You've convinced me. I'm in!"

My architecture intern, Chi Chi Lin, sitting on the Panigram Pavilion that she designed and built in just four weeks!