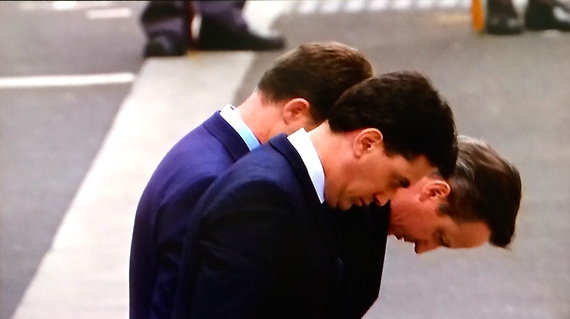 It's an accepted premise that what makes us ultimately successful and triumphant in our lives owes much to what we have been taught through humility in that old chestnut, failure. The Shakespearian demise of the leaders of the Labour and Liberal Democrat parties in the UK General Election has been fascinating to watch. Not even the awareness of television cameras beaming in on their every optic, nasal and labial twitches could disguise the utter horror of their routing.

Nick Clegg's political hold is as relevant now as shining a spittoon. And the stiff arm to extinction given to Ed Miliband is the quivering realisation that both politicians squandered the future of their parties. After all, one is only as good as one's opportunity, and it was there for the taking. Moreover, Ed Balls and Nigel Farage are reminders that, "...intellectually humans are capable of many things, but psychologically we are quite limited." (John McLachlan). Ed Balls' cringe-making attempts to control facial muscles enough to convey the insincerity of being confident in keeping his seat, just before losing it, was like watching a whipped animal; we recoil, just enough to continue watching the dying throes of a political life. If the great bard had imagined a yellow-brick road, Balls, the embodiment of blind ambition powered by exhaustion, would bounce into every rut of frustration until crashing into the Wicked Witch of the West and being evaporated with a touch of her magic wand.

In the meantime, the catafalque of public humiliation has remained in place, with not a corner of privacy allocated for a moment to mourn, as cameras followed the defeated; along roads, in and out of buildings, in front of microphones and, as yet another test of endurance, standing to attention at the commemoration of the end of WW2 at London's Cenotaph in Whitehall. There they endured another interminable flogging of attention, this time shared shoulder-to-shoulder with the outright victor, David Cameron, whose expression of pathos and connection to a bigger, past tragedy was all the more sincere when experienced from the exultant heights of victory.

How to set a face that exudes dignity while slowly perishing from thoughts of despair within? The dizzying fatigue of bathos had yet to show on their expressions, another tribute of sorts, to their extraordinary toughness. What must have been going on inside their minds? One hopes that there was room in their addled circuitry to acknowledge that not even their trouncing compared to what they were commemorating, and that, hopefully, the trumpets of the Reveille were a palpable reminder that they were still alive and loved by their families and friends.

Like trying to dissolve a chalky pill down a dry throat, today's reality for Nick Clegg and Ed Miliband is chokingly miserable. The decimation of the Liberal Democrat Party took place under Clegg's watch; he leaves his post of command with 8 seats in parliament out of 57 a few days ago. There seems no way forward right now for his party, or at least not one without decades ahead of re-building. Yet his resignation speech was heart-felt and dignified, and showed the real strength of a man who took a gamble and then endured five years of derision. It was powerful and moving, and impressive, knowing that this was composed in between emotions of shock and horror in the span of an hour. His resignation speech is good enough to serve in textbooks as a lesson in the importance of what we salvage as well as what we lose from failure; that there is no such thing as total failure, even if it comes close to an evisceration. And that as political death goes on, life goes on, each as stubborn as the other, the former permanently there to apportion degrees of learning and wisdom, and to acknowledge that no-one is above being human.

So the real strength of these individuals has been brought to the fore by their failure, and a failure of such seismic proportions that it can make our own versions quite bearable. I wish them some solace, especially now that life has whirled them in an opposite direction, so that even when tripping over those soul-destroying ruts, they will wipe off the bleeding cuts and focus once again on the positive, without meeting the Wicked Witch. Because they've been there, done that and are still wearing the t-shirt.