Ed Moses, the grand lion of Venice, California, sits in a black chair in his studio gallery slowly rotating, watching as studio assistants move his huge paintings on geometric canvases. These are from his craquelure series, a mutation away from his famous angular grid work. After applying thick layers of paint that season with Moses' "secret sauce" in the outdoor central courtyard of his studio compound, the venerable artist punches the canvases, creating rosettes and shatter patterns. The 88-year old painter explains wryly: "I discovered this by accident by when I fell into a canvas."

Now he creates the craquelure works purposefully, though without pre-meditation. Caught up in the creative process, he hits the canvases. He stops. He hits again. The key, he says is knowing, sensing, when to stop the process of punching the dried paint. But, he admits, some times he goes too far.

"I destroy about a hundred paintings a year. We cut them up into pieces and haul them away to a special location."

The craquelure he shows me are part of a gallery show he is planning for the near future. Moses currently has a show up through October 25, 2014 at Peter Blake Galley in Laguna Beach. A major retrospective of his work," Cross-Section" at UC Irvine, opens October 11, 2014 hanging in all three rooms of the University Art Gallery through December 13. "Cross-Section" follows Moses' work from 1970 onwards, showing his roots and mutations through the decades. In 2015, LACMA will exhibit his drawings.

I started off doing a lot of drawings. I filled paper with little marks, obsessed by making little marks, marks that would say I exist. So the first cave guys, when they saw their food print in the mud: It's me in the phenomenal world. I suddenly see my reflection. I am no longer like a dog or a cat, I become self-conscious, the ego develops. 'Who am I?' I am going to respond, 'Wow I exist!'

He takes a moment and continues, "I've been angry, I've been hostile because of the frustration possibly of not knowing who I was."

Who Ed Moses is a force of nature, a living legend, an artist--one with an unmistakable style that resonates across his transitions and mutations. A work of art by Ed Moses is undeniably an Ed Moses, no matter if it is a drawing, a grid work painting or crackaleur, or the sliding panels of spray-painted fabrics with mirrored cut-outs that hang in Hal's Bar & Grill, a Venice eatery that's a favorite with the art crowd: Moses' works are bold, expressive, complex, immediate, fundamental. Profound. I began to cry when I first stepped into his studio gallery and was confronted by a giant red black craquelure, its spiral, floral forms hitting the center of my psyche. He paused to let me compose myself, then said, "That's good. Whatever association you make you can do. All these reactions, you put them down and see if I need to react to it."

The octagenarian, who recently received the Spirit of Venice award at the 30th anniversary of the Abbot Kinney Festival, has given some thought to his place in the art world, to the position he has occupied for six decades as an artist, and to the place of older artists in today's culture.

"My thought is that the artist functions in a tribal context, that he is the shaman.

When the urban life came in, tribes no longer existed. Before that, certain guys would shake the rattles, and there was crossover with the basket weavers. They created certain motifs that talked about their lives, rain, fertility, death, falling of the edge of the world. And fire, how to maintain fire.

This got broken off during the urban change, but there was still a genetic core of shamans, of magic men, broken loose and genetically floating around. And when they had this gene, they shook the rattles. The shamans were the interpreters of the unknown, they reacted to the unknown with symbols and objects and wall painting. And that's where it all came from. That's where I came from, but when you're a young man you don't know that."

Moses had originally wanted to be a doctor, though in elementary school he couldn't read and was placed in remedial classes. After a stint in the Navy during World War II serving as a scrub assistant at San Diego Medical Hospital, his blockages to the printed word disappeared and he enrolled in pre-med classes at Long Beach State University, only to be tripped up by math and the slide rule. But he discovered art, eventually completing his MFA degree at UCLA, though enraged the faculty by showing his graduate work Walter Hopps' Ferus Gallery, rather than on campus.

A decade later after marriage, children and painting in New York, Moses joined the faculty at the newly opened University of California Irvine, continuing to paint, maintaining the fire. The recipient of a Guggenheim Fellowship, he has sold out gallery shows, been featured in numerous museum exhibitions, and is held in over thirty public collections worldwide. "Cross-Section" is the first major solo retrospective of the artist's work in almost twenty years, the last being at MOCA in 1996.

So that's my route, where I came from, and I am trying to respond to my life, to what I see, what I experience: people, anxiety, fears and all the different kinds of things by making paintings. And the paintings are reflections of that.

Moses guides me into a secret room full of his art and mirrors, letting me take in the magical works bending with color, reflecting on each other. Before he closes the door on me, leaving me alone with the mirrors and paintings, he smiles and says, 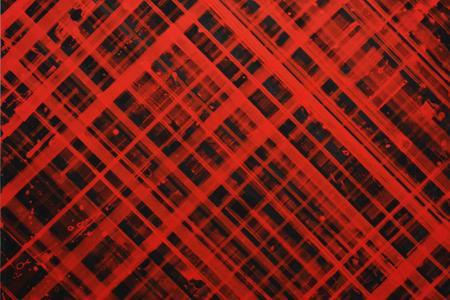