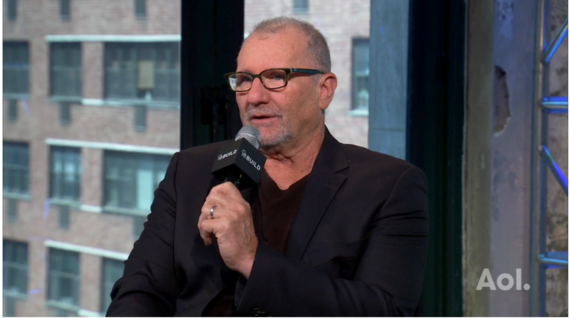 Finding Dory is the follow-up to Disney's smash hit film, Finding Nemo. With help from Nemo and Marlin, Dory the forgetful fish embarks on a quest to reunite with her mother and father. Ed O'Neill plays an octopus named "Hank" in the highly anticipated movie, opening Friday (June 17th).

When first approached to voice a character in Finding Dory, Ed O'Neill asked for the script, as established actors naturally do. When told there was no script, he asked for sides. When he was told there was no sides, he paused to assess whether he should blindly sign onto a film.

"Why would I sign onto a project I... I don't even know what it is?" Ed asked his team.

On Starring in Finding Dory: "I thought it was a cameo. Nobody ever told me It was a featured role. I had to figure it out for myself."

Recording Finding Dory: "You might do a take, in this case, the octopus, there's a lot of anxiety and fear that they're going to get caught. They're constantly under pressure so there's a lot of energy being used up. One take might go 30-40 seconds of all out fear and then you finish and [breathes] and you look in the booth and they're going [Ed mimics Finding Dory recording booth crew]"

Perks of Animation: "You don't have to wear makeup. You go in wearing shorts and a T-Shirt"

Moderator Leigh Blickley: We learn that "Hank" has been in every Pixar movie ever made.

"This is another thing I don't understand. I'm just new to the Pixar Family ... When they talk about these things, I wasn't sure it was real."

"I didn't even know he was in it. Pixar is very secretive." Ed reveals that him and Ty do not gossip about their other projects on the set of Modern Family as it is "bad form." Kate McKinnon, Eugene Levy and Diane Keaton were some of the other co-stars Ed was excited to collaborate with.

On Co-Star Ellen DeGeneres: Ellen thinks everything happens for a reason while Ed thinks "everything is random."

On The Now Infamous Britney Spears Fan Encounter: "I saw this woman approaching and I thought 'Oh My God she wants a picture' and she stops and says 'Could I have a picture? I love Modern Family. You're my favorite character."

"I'm the only one here. Yea, sure. I have to catch a flight though. I don't even smile. 'Thank you so much' she said. I said 'Thanks have a good trip wherever you're going.' My 16-year-old daughter, when she found out, she said 'you..you are a moron.'"

For Your Consideration: Ed briefly discussed ABC Comedy Series Modern Family and the Emmy Awards. He shared the cast of Modern Family had difficulty figuring out an Emmy Awards exit strategy, as they were so used to the escape route the Television Academy reserves for winners. "When we didn't win the 6th Emmy Award [for Modern Family], we were kind of relieved. Nobody wanted us to win. We could feel it. 'C'mon already, we've won enough.' It's true. How many could you win that it means something?"