For all the flack that fast food companies like McDonald’s have been getting about paying living wages to their employees in the U.S., a British minister applauded the company Friday for filling what he says is a central, but little mentioned part of the U.K. economy: building “soft skills.”

“I think the biggest education institution in the country is McDonald’s,” Ed Vaizey, minister of state for culture and the digital economy, said during a panel at The WorldPost Future of Work conference in London.

“We often forget when we deride the Big Mac that more people are probably getting their qualifications working at McDonald’s than almost any other employer,” he continued.

Recently, McDonald’s launched an initiative in the U.K. aimed at developing “soft skills,” something it claims is worth about $133 billion dollars to the U.K. economy annually. Soft skills are considered to be things like communication, creativity and the ability to collaborate.

Interestingly, a recent survey by Adecco Staffing USA, a major job placement company, found that these soft skills actually make up the biggest skills gap in the U.S. workforce. A full 44 percent of American business executives interviewed for the group’s State of the Economy and Employment Survey said that this was the case.

Other gaps like a lack of proficiency in STEM (science, technology, engineering and mathematics), for which the faltering U.S. higher education system often takes the blame, only makes up 22 percent of the U.S. skills gap, according to the executives.

One expert goes so far as estimating that 89 percent of new hires who get fired within the first 18 months get fired not for lack of technical skills or hard knowledge, but because of a lack of soft skills.

The McDonald’s shout out took place during a panel about how businesses can be aware of the skills gap that exists between the rising millennial generation and the older people who tend to run larger corporations.

Amy Rosen, an expert on the global economic challenges facing youth, said that a sad reality of the U.S. economy is that there is a growing work ethic gap between minorities who might have gotten their first jobs working at McDonald’s, compared to wealthier white people who might have never worked by the time they graduate from college.

“There seems to be a correlation between the skills gap and the unemployment rate,” Rosen said. “We have to be clear around what these soft skills are and how to get it right.”

The comments also tie into a statistic that she brought up in a previous panel: about 30 percent of college graduates are currently working jobs that do not require a degree in the first place.

So maybe -- just maybe -- that minimum wage McDonald’s job might not be as bad as it’s cracked up to be, even for a college graduate or two. The British government endorses it, after all, and everything they say sounds smart.

Produced in collaboration with The WorldPost. 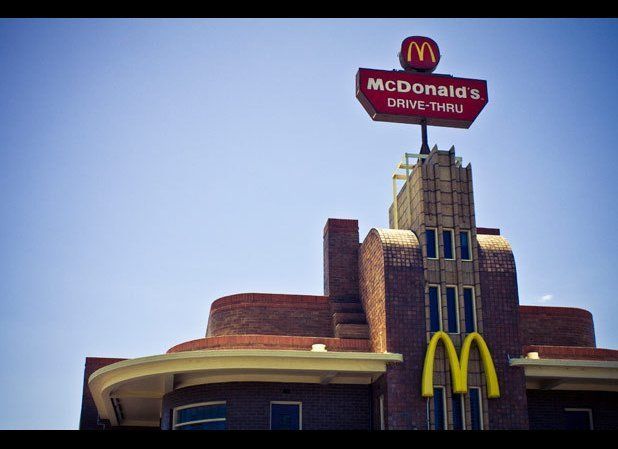 1 / 5
#5) Melbourne, Australia
The Art Deco McDonald’s in Clifton Hill, Victoria was once an <a href="http://www.collingwoodhs.org.au/index.php?p=3_5" target="_blank">old hotel</a>. Today, the neon lit, multi-story Macca’s (the moniker folks Down Under have given the American chain) serves burgers, French fries, and shakes in a retro dining room. <a href="http://www.thedailymeal.com/we-re-lovin-it-19-coolest-mcdonald-s-slideshow?utm_source=huffington%2Bpost&utm_medium=partner&utm_campaign=worldmcds" target="_hplink"><strong>Click Here to More of the World’s Coolest McDonald’s Restaurants</strong></a> <em>Photo Credit: © <a href="https://www.flickr.com/photos/ikaink/" target="_hplink">Flickr / Ika Ink</a></em>