Eddie Redmayne, playing a young Stephen Hawking, tries to explain to his Cambridge classmate that he's just been diagnosed with ALS. "I have motor neurone disease," Hawking tells his friend, using its British name. The other young man's face doesn't change. Hawking might as well have the stomach flu. "You know, the American baseball player, Lou Gehrig?" Hawking asks, grasping at straws.

Redmayne's performance in "The Theory of Everything," the new film about the famed theoretical physicist, cosmologist and author, just might win him an Oscar. In large part, his acting is remarkable for its realistic portrayal of ALS, or amyotrophic lateral sclerosis, a terminal disease that causes a person's muscles to atrophy. The disease has no cure, and its causes aren't understood.

The illness came into the spotlight recently, when the sensational Ice Bucket Challenge led to a surge of more than $100 million in donations to the ALS Association. (Redmayne took the challenge in August with pal Jamie Dornan.) As a result, more people now recognize the illness than ever before, but that doesn't mean they know what it looks like. Redmayne's portrayal can be stingingly painful to watch for someone who has lived near the disease, but doubtlessly important, as the "Les Misérables" actor and Burberry model puts a face to the name "ALS." 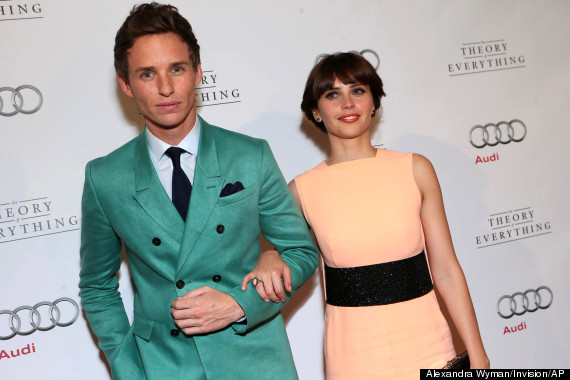 "The Theory of Everything" charts the disease's development in Hawking from its small, seemingly innocuous beginnings. First, it's a pen that slips out of his hand. It's nothing, an accident, it happens to everyone. Then, he knocks over a cup of coffee. He's physically awkward and doesn't like to dance, hesitating with his soon-to-be wife, Jane, played by Felicity Jones. Then he's at the blackboard solving an equation and even as he tries to clutch it tighter, he drops the chalk. He can't unclench his fingers, and his gripping hand takes the shape of a claw. For the first time, we register that during the course of the movie, we'll be witness to Hawking's physical decline. By the end, picking up a pen is a fantasy.

The precocious Ph.D. student knows something is wrong, but he brushes it off. Movie-minutes later, after falling down on his face, a Cambridge doctor is telling Hawking that he has two years to live. After days of anguish, it comes to him. His calling in physics is to unlock the secrets of time, that great finite resource of which he's been apportioned so little.

Hawking, in many ways, has made great strides toward that lofty goal. He documented his game-changing discoveries about the origins of the universe in his popular Brief History of Time, published in 1988, when he was almost completely unable to use his body or even his voice, due to an operation. At the age of 72, Hawking has beat his doctor's two-year prognosis by an astounding fifty years (leading specialists to wonder whether his strain of the disease is unusual, or if he never had ALS in the first place). At the same time, Hawking couldn't avoid the degeneration that comes with a progressive illness. Once he lost a piece of ground to ALS, he would never get it back.

When his collapses become too frequent for Jane to handle, she buys him a wheelchair. Resigned, Redmayne's character strains to lift himself from where he's sitting, and painstakingly moves his body to hover over the chair. Then his arms give out, and he drops into the seat with a thud. "This is temporary," he tells Jane, but we all know that it's not.

"To research for the role, I spent time in a neurology clinic, where I met doctors who care for patients with ALS, as well as their families," Redmayne told The Huffington Post. "Some of the families invited me into their homes, and through that experience, I learned how complex the role of the caretaker really is." He also examined the impact on the relationship between Jane and Hawking, who ultimately split up. Hawking would go on to marry his aide, Elaine. (Hawking's marriage to Elaine ended in 2006, and there have been allegations, which he vehemently denies, that their marriage had a darker side.)

ALS impacts not just the way Hawking relates to others in the film, but also how he interacts with space, down to the smallest detail.

Redmayne worked with a dance instructor in order to be able to move like someone whose muscle movement became more limited with each day. Filming the movie, he would occasionally realize that a change needed to be made on set for it to be realistic. "The set they designed for the bedroom was a bunk, and there was no way at that stage of the disease that he'd be able to climb up," he said.

"ALS looks somewhat different for every person," Redmayne explained. This presented a challenge as the actor learned to move at various stages of the illness, because there is no video footage of Hawking from before the 1980s when he began using a wheelchair. "Everyone's decline is different, so my challenge was to project what I thought his specific decline looked like," he said. Redmayne relied mostly on photographs and conversations with Hawking, his family and friends.

Off set, Redmayne believes there are hurdles to overcome in the fight against ALS, which he says has become extremely important to him. "The disease has a real PR problem," he admitted. "In the U.K., it's called motor neurone disease, and in the U.S., it's called ALS or Lou Gehrig's. Most diseases just have one name, so you always know what people are talking about."

In a world where Google search terms and name recognition are indispensable, ALS has its work cut out. But with the help of intimate storytelling and names like Eddie Redmayne and Stephen Hawking, there's a real potential for change.

Biopics You Probably Forgot About