Today, Eddie Stern is best known as a yogi to the stars, working with A-List celebrities including Deepak Chopra, Madonna, Gwyneth Paltrow, Moby, Willem Dafoe, Chris Martin, Kenny Scharf and Russell Brand among others. Beyond his celebrity status in the yoga world his work as a philanthropist and his desire to be giving back make him an inspiration well beyond the yoga mat. 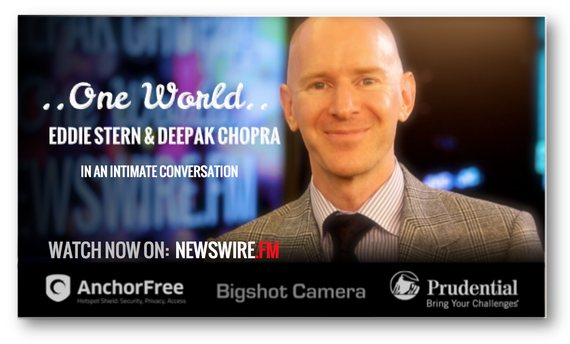 Eddie wasn't always headed for greatness though. His troubled youth was full of rebellion well before the age of 18. Luckily, he had the self-awareness to realize that this wasn't the way of expressing dissatisfaction with life. Around the time I was 18 I learned about yoga from a friend," Eddie recalled in an episode of NEWSWIRE.FM'S program ONE WORLD with Deepak Chopra. Eddie realized that he was able to achieve the clarity and consciousness with yoga and meditation and suddenly the whole trajectory of his life changed.

From such humble beginnings, Eddie has become a teacher of yoga and continues to spread this knowledge to others. Eddie works now to improve the quality of live for people living in New York City as well as internationally. His involvement in Urban Yogis has helped children, to avoid some of the choices he himself made in his youth and instead choose a healthier, safer, and less violent existence. Many of the young people that Eddie has worked with are now yoga teachers themselves and they continue to spread this valuable gift to communities that may not have otherwise had access to yoga as an outlet. "What we wanted to do was not only give them the tools for their own transformation...now they are going to take these tools that helped transform them and taking them to an area of the city where it will be very helpful."

Eddie also just launched a series of yoga sessions with Deepak Chopra titled ONE WORLD YOGIS with original music produced by his friend and well-known music producer MOBY. Recent advances in the field of neuroplasticity and epigenetics have revealed that the regular practice of yoga can literally change the structure of the brain to optimize physical, emotional, and spiritual well-being. These ancient practices upgrade genes that involve self-regulation and healing, and have been shown to delay aging and inflammation. In ONE WORLD YOGIS Deepak and Eddie merge the wisdom of yoga with the findings of Western research to create a rich and subtle experience for the whole being.

Eddie has successfully combined his passion for yoga with his passion for giving back. With the tools he has available, he is changing his city, his world for the better. What could have been a happy story about yoga helping one man find himself, has become so much more and that is where Eddie's true star power lies.

This is a blog series produced in partnership with One World, a video series with Deepak Chopra and NEWSWIRE.FM. To view the full video and subscribe to all the episodes click here.