(AP) JERUSALEM - A former Israeli soldier who posted photos on Facebook of herself in uniform smiling beside bound and blindfolded Palestinian prisoners said Tuesday her actions were "thoughtless." But she insisted she did not humiliate the detainees and said she was surprised the pictures were viewed as offensive.

Eden Aberjil struck a defensive tone in a pair of radio interviews, claiming that she did not do anything wrong and that similar things take place "every day" in the army.

Both the Israeli army and Palestinian officials condemned Aberjil over the photographs -- one of which was accompanied by an exchange with a friend including jokes and sexual innuendoes. Because she has completed her mandatory service, however, it's unclear whether she will face any disciplinary action.

Speaking to Israel's Army Radio station, Aberjil called her decision to post the photos, taken in 2008 near the Gaza Strip, "thoughtless and innocent." But she added: "I still don't understand what wasn't OK."

"There was no statement in the photos about violence, about disrespect, about anything that would hurt that person. I just had my picture taken with someone in the background," she said. "When I understood that so many people were hurt by those pictures, I removed them." 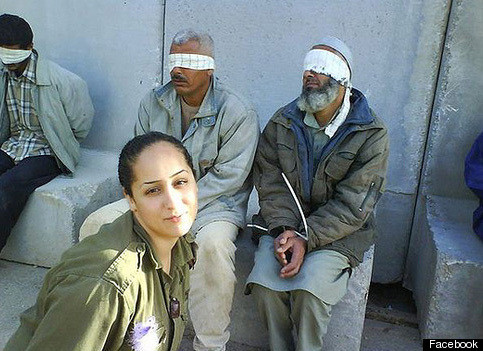 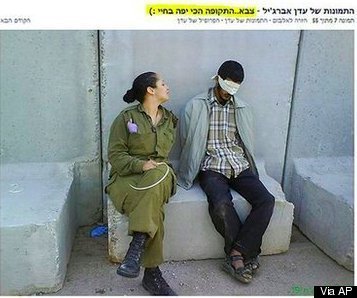 In a separate interview, Aberjil lashed out at the international uproar over the pictures, which were vaguely reminiscent of the snapshots taken in 2003 by American soldiers at an Iraqi prison showing Iraqi detainees, humiliated and terrified. In contrast, the Israeli pictures showed no signs of physical abuse or coercion, and Aberjil denounced any comparisons.

"I did not humiliate those detainees. I didn't hit them, I didn't act toward them unpleasantly. It's completely different than the American soldier some are trying to compare me to," she told Israel Radio.

She said she was shocked by the international interest in the story, adding she had received calls from European and American media outlets. She attacked her local critics, saying they were more concerned about international criticism than protecting a soldier who bravely served her country.

"This is something that happens every day in the army, especially at bases like this," she said, without giving evidence. She called the army's criticism of her a "disgrace," saying she "endangered her life for the country."

Contacted by The Associated Press, Aberjil said she did not want to speak to the international media.

Palestinians are routinely handcuffed and blindfolded when they are arrested to stop them from trying to flee.

The photos, taken in 2008 near the Gaza Strip, drew sharp criticism from the Israeli military, pro-Palestinian advocacy groups and Palestinian officials.

Palestinian Authority spokesman Ghassan Khatib condemned the photos and said they pointed to a deeper malaise -- how Israel's 43-year-old occupation of Palestinians has affected the Israelis who enforce it.

"This shows the mentality of the occupier," Khatib said, "to be proud of humiliating Palestinians. The occupation is unjust, immoral and, as these pictures show, corrupting."

Yehuda Shaul of Breaking the Silence, a group of former Israeli combat officers that criticizes Israeli policies toward the Palestinians, said the pictures showed how Israel's occupation of the Palestinians has become "so routine ... you lose the ability to see them as human beings."

Capt. Barak Raz, an Israeli military spokesman, said the pictures amount to "a serious violation of our morals and our ethical code."

Although her former commanders have been informed of the pictures, it is not clear whether the army can punish Aberjil because she has finished her compulsory military service.