Spurred on by the Supreme Court’s recent Hobby Lobby ruling, Eden Foods CEO Michael Potter has revived a March 2013 case to nix coverage of all birth control from his employees’ healthcare plans. In turn, many shoppers have soured on the organic food giant and are boycotting its products.

“In accordance with his Catholic faith, Potter believes that any action which either before, at the moment of, or after sexual intercourse, is specifically intended to prevent procreation, whether as an end or means -- including abortifacients and contraception -- is wrong,” Erin Mersino, Eden’s lawyer from the conservative Thomas More Law Center, said in a statement sent to The Huffington Post on Friday.

Last month, Hobby Lobby won the right to shirk a clause in the Affordable Care Act that requires employers who provide health insurance to cover all Food and Drug Administration-approved forms of birth control. The company, which is owned by a family of evangelical Christians, opposed emergency contraceptives such as “morning after” pills Plan B and Ella and intrauterine devices, which it believes are tantamount to abortion.

“Just went thru my cupboard and pulled out 4 Eden products,” Jackie Ellison, a woman in Atlanta, wrote in a comment on Eden's Facebook page. “My last four until you allow women their due health coverage.”

The company known for its popular brand of soy milk, and a staple on the shelves of grocers such as Whole Foods, sued the federal government in March 2013, according to legal filings. But a federal appeals court tossed out the case.

“A secular, for-profit corporation cannot establish that it can exercise religion,” three judges wrote in their decision.

But the Hobby Lobby ruling changed that. Five of the male justices on the nation’s highest court decided that “closely-held” corporations can opt out of covering some forms of birth control to which they object for religious reasons.

Invigorated by the Hobby Lobby ruling, Eden renewed their case, which is currently being reconsidered by the Sixth Circuit Court of Appeals.

“We were convinced that actions of the federal government were illegal, and so filed a formal objection,” Eden said in a statement earlier this month. “The recent Supreme Court decision confirms, at least in part, that we were correct.”

But the move has also fueled shoppers' backlash. 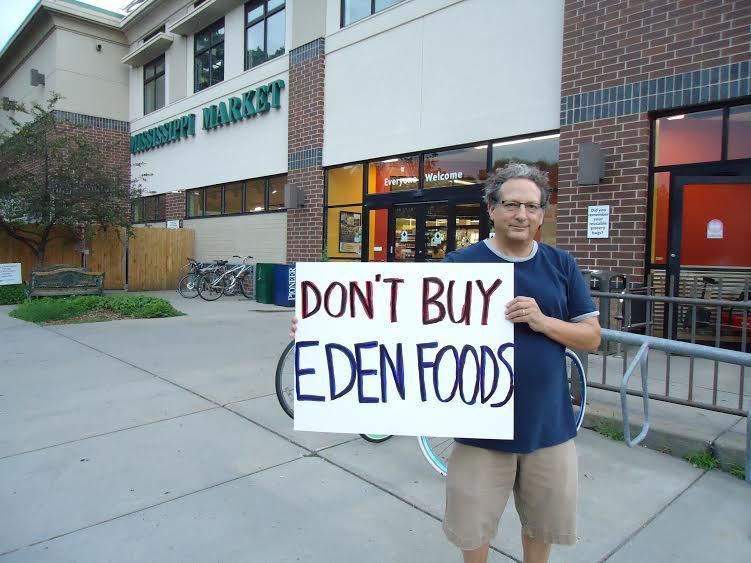 Todd Kolod, of St. Paul, Minnesota, holds up a sign outside a Mississippi Market that stocks Eden Foods products. He is a member of the Boycott Eden Foods Facebook page.

Meanwhile, angry commenters are trolling the company’s official Facebook page, where it posts articles about organic food and recipes.

"My concern is more about women's rights than the actual coverage of contraceptives, and how the policies of Eden Foods and like companies unequally affects women," Tanner Roan, who started the Boycott Eden Foods page on Facebook, told HuffPost in an email. "With the recent Hobby Lobby decision, the boycott has gained quite a bit of ground and has inspired many other people to join in and take further action."