Day after day. Over and over again. He can see his demise. But no on else can see theirs. Until.... 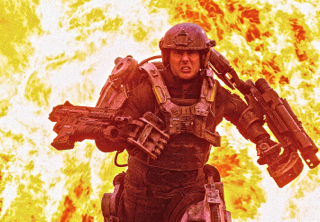 In Hiroshi Sakurazak's 2004 military science-fiction novel All You Need Is Kill, Mimics (vicious, crustacean-looking aliens) invade Japan. Keiji Kiriya, the book's protagonist, is a young recruit who is suited up in gunnery armor called a "Jacket" and thrust out on to a battlefield to kill the evil extraterrestrials. Keiji dies. He's reborn each morning to fight and die again. On his 158th trip into déjà vu combat, a mysterious female soldier named "Full Metal Bitch" gives him a clue to his salvation.

For Edge of Tomorrow, the screen adaptation of Sakurazak's book, screenwriter Christopher McQuarrie, who is quite adept at writing brain-twisting scripts (The Usual Suspects), and co-writers Jez and John-Henry Butterworth (Fair Game, CIA operative Valarie Plame's story) change the locale from Japan to a French beach (ala the Invasion of Normandy), some time in the future. Keiji becomes public relations expert Major William Cage (Tom Cruise), a paper-pushing pretty boy spin-doctor who has never seen a day of combat. In London, he glibly mouths off to a commanding officer, Gen. Brigham (Brendan Gleeson) and quickly finds himself shanghaied and shoved onto the front lines battling aliens who massacre the troops. Cage, a poser not a fighter, gets annihilated. But when he dies, the day starts again. He's stuck in a cycle of eternal warfare, until he meets Special Forces warrior Rita Vrataski (Emily Blunt) who sends him a lifeline, "Find me when you wake up."

The very ambitious script is very smartly directed by Doug Liman who knows how to wring the last drop of sweat and fear out of action films (The Bourne Identity) and is pretty sly when it comes to making tempestuous male/female thrillers (Mr. & Mrs. Smith). With the help of editor James Herbert (Sherlock Holmes), Oscar-winning cinematographer Dion Beebe (Memoirs of a Geisha) and set decorator Elli Griff (Gladiator) what you see, ad nauseum, is an incessant, fast-paced and graphic nightmare, filled with loud predatory demons (the sound and visual effects are more realistic than those in the recent Godzilla). This is a near-perfect setting for a candyass anti-hero who has to man-up.

Back in 1981 when Tom Cruise played Cadet Captain David Shawn in Taps, he stole the movie from Timothy Hutton and Sean Penn with a steely swagger. Thirty odd years later, after Top Gun, A Few Good Men, Mission: Impossible... he's still on top of his game. He can shine in any movie -- even one with a dour, tough-to-watch Groundhog's Day scenario that may not appeal to everyone. His performance is riveting. And, though they never make love and only steal a kiss in an awkward moment, the unrequited sexual tension between Cruise and Emily Blunt is as tangible as their suicide missions. Gleeson and other cast members like Bill Paxton (Titanic) support the main performances, but their contributions are grossly overshadowed.

What will stick with you as you ponder what you've just witnessed, is this stinging feeling that you were trapped in a barrage of psychological terror. You were brutalized against your will. You know what is coming, but you're completely helpless as the devil holds his finger on the reset button of your life and smiles while you squirm.

Credit a smart script, smarter direction, excellent production elements and an unflappable leading man for taking you to hell and back -- over and over again.