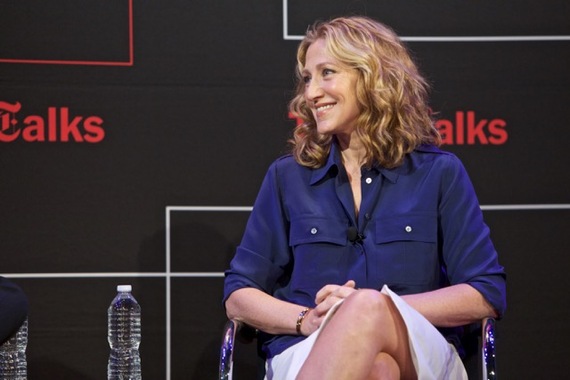 On the set of Showtime's Nurse Jackie, Edie Falco feels at home. When the cameras are rolling, she's completely immersed in her character—lying to her husband at the dinner table, arguing with her coworker at a patient's bedside, sneaking away to snort pills off the bathroom sink. She's feeling the highs and lows of this character whom she's grown so close to over the past seven years.

But when the director yells "cut," Falco knows she can take off her scrubs and return home to her children, her real life. "There was a time when I thought a great actress took her character home with her," Falco said at a recent TimesTalk, "and then I grew up and realized that made for a horrible home life."

Fortunately it's been easy for Falco, a former addict, to dissociate herself from Jackie. "I feel nothing but gratitude," Falco says. "I'm a sober person, I'm not there anymore."

However, her past personal experience, she feels, gave her special insight into the character. "I know the addictive personality," she says. "I understand its lack of rationale. If you aren't an addict, you don't normally get it. I was grateful for that awareness because it certainly made it easier to portray her."

It also made it easier for her to empathize with Jackie. "We all start out with a kernel of good," she says. "She'd be a good person to know if she didn't have this little glitch in her personalty." She doesn't necessary see Jackie as a straightforward anti-hero, either. "I have a hard time when it comes to how my character is perceived," she says. "I'm not often able to tell if a character is likable or not. All I have is my visceral experience of playing her."

After six years in Carmela Soprano's acrylic nails, and seven years walking in the non-slip shoes of Jackie Peyton, you'd think Falco would be ready to move on from TV. "I love doing TV," she says. "I never in all my days thought I'd say that, but TV is not what it was when I was coming out of school, and the nature of the work, the series-type regularity and schedule, is great."

However, unlike some actors moving onto the next phase of their career, Falco has no desire to get behind the camera. "I love what I do so much," she says. "There's so much acting to be done yet. I don't want to be a writer, director, or producer."

As for what's next exactly, Falco says she never knows, and she likes it that way. "I'm always shocked by the next step in my life," she says. "I just want to read a script and get excited about it. I never know what's next and that's worked very well for me."